Is Eberswalde Really a Smoking Gun?

The other day in Mars journal club, we took a look at a paper about the "fan" in Eberswalde crater. You may recognize this name: It is one of the four finalist landing sites for MSL. The site was chosen because at the western end of the crater, there is a feature that most Mars scientists consider to be a delta, formed when sediment transported by rivers encountered standing water and settled out. 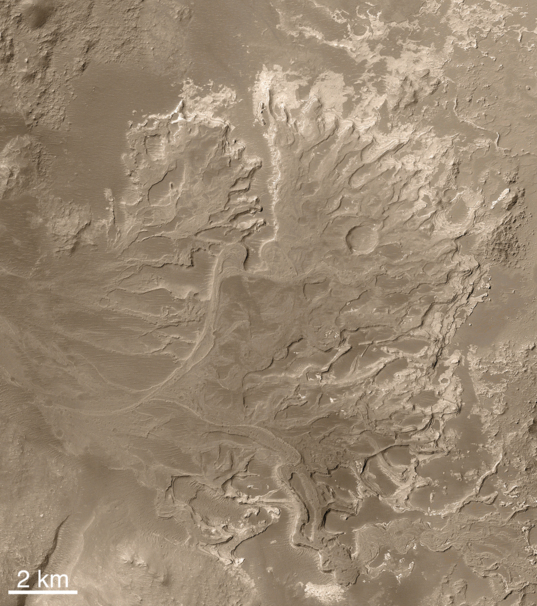 The paper we looked at considered an alternative to the delta hypothesis. Instead, Jerolmack et al. proposed that the fan could be an alluvial fan, formed by river channels that "avulsed" back and forth to form a gradually sloping fan. "Avulsed" means that the river abruptly changes its course. When you average out over lots of avulsions, you get a broad, shallow cone of material deposited: an alluvial fan.

Jerolmack used a computer model of this style of fan formation and fit it to the slope of the Eberswalde feature's surface. They found that, if the Eberswalde fan is actually alluvial, it would have formerly extended about 40 km out into the crater, and that it could have formed extremely rapidly: in tens to hundreds of years, and with no need for a standing body of water.

That's a much different story than the more popular one: that the Eberswalde fan is a delta that formed over many thousands of years in a lake. Which scenario is correct? I don't know. It may not be possible to know from orbit. That's part of why Eberswalde is a candidate MSL landing site: If our "smoking gun" evidence of a lake on Mars turns out to be an alluvial fan deposited in 50 years, then that certainly has an influence on the question of the habitability of Mars as a whole! Of course, everyone hopes that it is truly a delta, in which case it would have been favorable for preserving organic biomarkers and would record a lot of information about the martian environment.

There's only one way to know for sure: land there!