I'm a little late on this, but I thought I should share the news: MSL now has a good head and neck on its shoulders, and has officially "roved". Last week, engineers at JPL installed the "Remote Sensing Mast", bringing MSL's total height up to nearly seven feet tall (2 meters). Also, MSL drove for the first time in the clean-room where it is being assembled! Here is a 3D photo of the rover just prior to driving, taken by Kris Capraro: 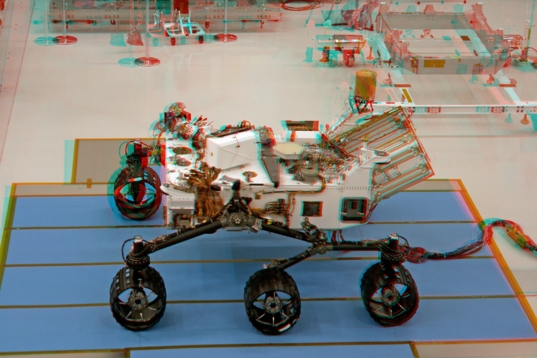 3D anaglyph of Curiosity in the clean room

This anaglyph was taken in the JPL clean room during Curiosity's assembly, shortly before the rover drove for the first time.

And then, to celebrate the momentous occasion, one of the JPL engineers busted out the dance moves. Specifically, The Robot: