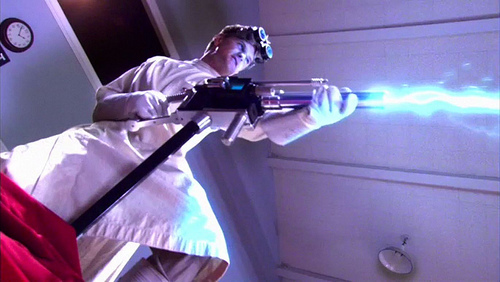 This is what my work is like every day. Honest.

Through a crazy random happenstance, I was just interviewed by a friend of a friend of a friend at Australian radio station 'triple j' for a feature on lasers! We talked all about shooting stuff with lasers, why one might want to do that (other than because it's awesome) and how the real lab is not quite what people picture.

The show is called Hack with Kate O'Toole, and it airs in about 2 hours at 1:30 pm AEST (11:30 pm EST). Update: I fail at time zones. The show aired at 5:30 AEST. It looks like you can listen to programs online for one week after they air, so no worries if you don't see this in time, you should still be able to find it.

Update: You can download the show as a podcast at this link, or if that doesn't work, try here. The feature on lasers starts at 18:22.

Sounds like they edited my interview a lot, basically just leaving the first stuff I talked about. But they also talked to some other laser folks, including a long interview about the LISA mission searching for gravitational waves, so I recommend you check it out.