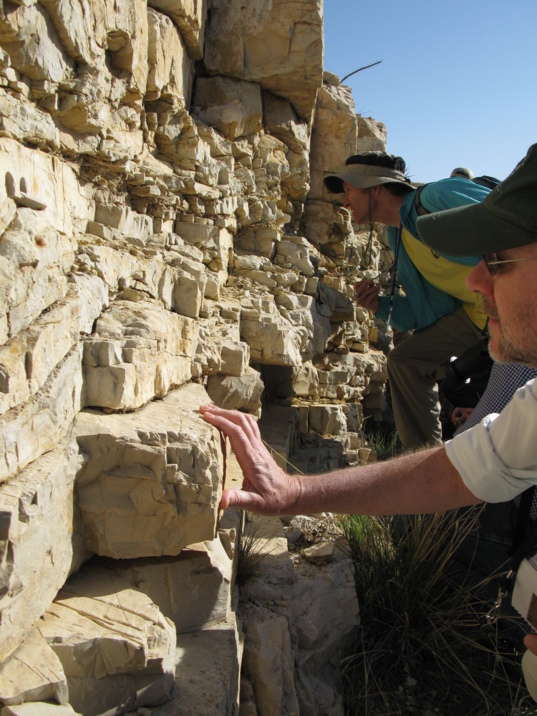 We started off Day 2 of the field trip by driving up onto the eroded rocks of what used to be the tidal flats of the ancient reef, between the shore and the continental shelf. The closest modern-day analog to the rocks that we visited is the Persian Gulf, where you have an arid climate and deposition on the shelf and down into the deeper ocean basin. In the tidal flats and lagoons of the ancient sea where the rocks that we visited formed, the water was only a few meters deep, and was a nice place for blue-green algae to grow. You might think that a bunch of single-celled organisms wouldn't leave much of a mark in the geologic record, but you would be wrong! 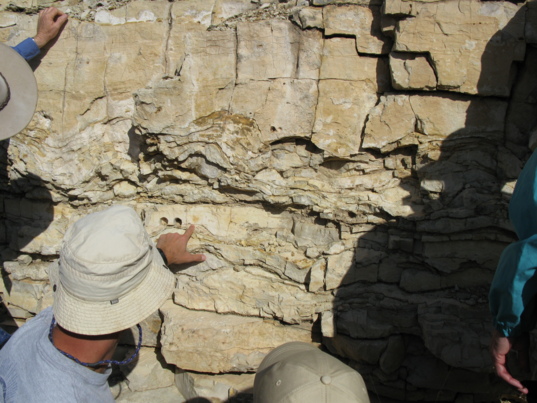 The wavy layers in the carbonate rocks here are stromatolites—fossil bacterial mats that grew in the shallow tidal flats and lagoon behind the ancient reef.

In fact, cyanobacteria growing in tidal flats tend to form thick, wavy mats that are then preserved and fossilized, forming "stromatolites". Stromatolites are among the oldest evidence of life on the Earth. We spent quite a while discussing the stromatolites here, and particularly learning how to tell the difference between wavy layers that are biogenic and those that are due to things like sand ripples or deformed layers that were originally flat. The variation of the layer thickness is the first hint: stromatolites tend to be thicker in low points and thinner in high points. If the waviness was due to the deformation of originally flat layers, there shouldn't be a change in thickness between highs and lows. Another hint is if you can tell that the waviness forms domes rather than parallel ridges, and especially if you find isolated domes or columns. It's difficult to form an isolated dome-shaped ripple, but that's exactly what you get when mounds of cyanobacteria are growing. 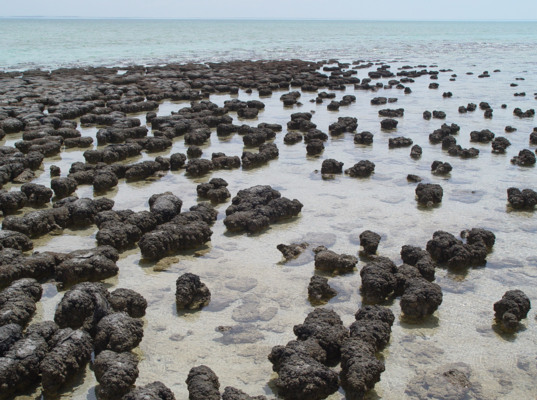 After looking closely at stromatolites, we drove closer to what was the ancient shore and encountered an abrupt transition to layered gypsum and silt beds deposited as the near-shore pools periodically dried out. This area was used as the "slow-motion" field test for Mars Science Laboratory in 2007. The science teams essentially practiced by sending someone out here to take pictures and samples, and the team tried to understand the site without any other information. For our field stop, we took a look at some infrared maps of the minerals in the area, and then climbed a nice exposure of them. 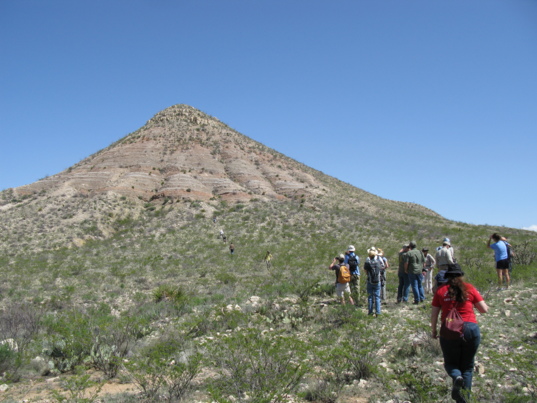 We climbed "Tepee Hill", a nice exposure of gypsum and mudstone layers deposited in the evaporative shelf lagoon.

In the afternoon, we drove to "Last Chance Canyon" to admire an excellent exposure of the inclined beds that characterize the transition from the continental shelf to the ocean basin. The curves of the canyon let us see the tilted layers from different angles to get a good three-dimensional feel for the stratigraphy. We spent a while sitting up on one side of the canyon and sketching the opposite side and then hearing from our expert guides about all the subtle details that we amateurs had missed in our sketches. 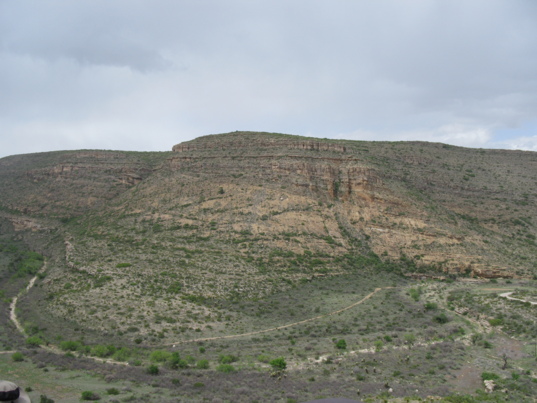 The upper layers here are flat-lying, but below them, the layers begin to dip down to the right. These dipping beds were deposited on the slope of the shelf margin. Don't be fooled by the diagonal dark green vegetated stripes that go from upper right to lower left—those are fractures in the rocks where plants have taken hold. 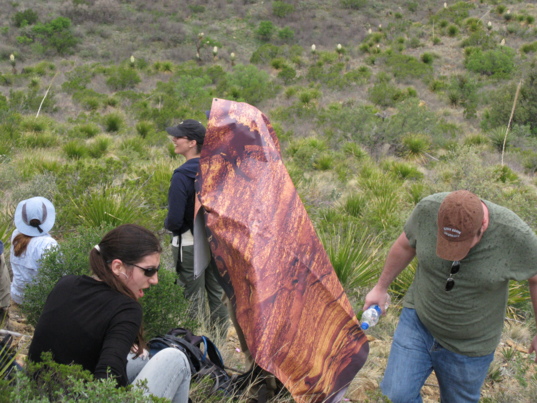 It started to rain while we were studying the outcrop, but lucky for one member of our group, he was carrying the large canvas print-out of the Burns formation, a well studied section of rocks on Mars. Turns out it makes a decent cloak.

Our penultimate stop of the day was not listed in the guidebook but was pretty interesting. We took a look at some of the carbonate layers that had curious features called "tepee structures". The leading theory for how these structures form is that, when carbonate deposits dry out, new minerals form and cause the layers to expand, causing them to buckle upward. There's still a lot of debate about how they formed, however. They're interesting to us martians because in an overhead view, the buckled zones form polygons, and there are polygonal features all over on Mars. 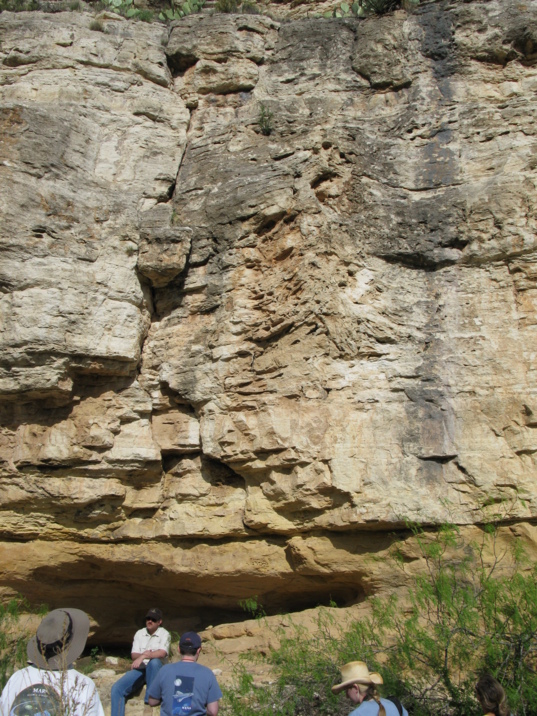 A good example of a "tepee structure" is visible in the rocks here, just right of center. Geologists aren't completely sure how they form but the leading theory is that it has something to do with the rocks expanding as they dry out and new crystals form.

Our final stop was also not listed in the guidebook. We decided that since we had been talking about the ancient reef so much that we should take a look at it. Within the carbonates of the reef we found a lots of interesting fossils, including a texture that looked like miniature stromatolites, large spiral shells, and crinoid remains.

That concludes Day 2 of the field trip! Day 3 was a visit to Carlsbad Caverns—stay tuned for lots of pretty pictures!