Fact #1: As a Mars scientist, I am incredibly spoiled. There are so many missions to Mars right now sending back so much data, that even if they all went silent tomorrow, it would be decades before we managed to look at all the data and figure out what it's telling us.

Fact #2: There are lots of people out there (I'm looking at you, loyal readers!) who would love to be able to actively participate in exploring Mars. I mean, have you seen the stuff that the folks at UnmannedSpaceflight have managed to put together? They do more with the data from Mars than a lot of scientists! 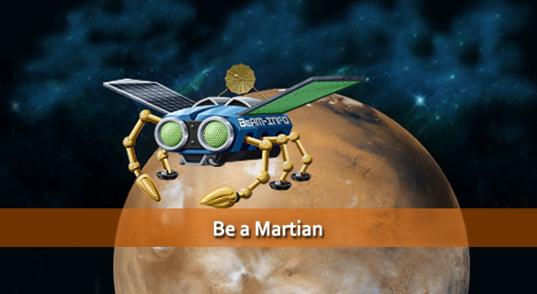 So, given those two facts, you can see why I think the new "Be a Martian" collaboration between NASA and Microsoft is a great idea. Check out this excerpt from the press release:

Drawing on observations from NASA's Mars missions, the "Be a Martian" Web site will enable the public to participate as citizen scientists to improve Martian maps, take part in research tasks, and assist Mars science teams studying data about the Red Planet.

"We're at a point in history where everyone can be an explorer," said Doug McCuistion, director of the Mars Exploration Program at NASA Headquarters in Washington. "With so much data coming back from Mars missions that are accessible by all, exploring Mars has become a shared human endeavor. People worldwide can expand the specialized efforts of a few hundred Mars mission team members and make authentic contributions of their own."

How cool is that? It's a really brilliant idea, and I hope it goes well. A similar project was pioneered by galactic astronomers who had way too many pictures of galaxies to deal with, so they opened up the database to the public in the form of GalaxyZoo. It was a tremendous success, with thousands of people helping to classify millions of galaxies.

I just created my account and played around a bit, and it looks like a very user-friendly introduction to Mars science. You can contribute in two main ways: aligning images to contribute to a global map, and also counting craters. Both of these tasks can sort of be done by computers, but humans will always be better.

There's more to the Be a Martian site than just work though, there are also lots of goodies like videos and Mars wallpapers, and great information about Mars. There is even a "movie theater" where you can watch the first few episodes of a series of videos called "The Martians", that focus on people from all over the country who are involved with Mars, ranging from members of the rover teams to enthusiastic amateurs to actors putting on a play about Mars! There are more episodes on the way, and I encourage you to keep watching... you might see someone you recognize. ;)

Bottom line, it looks like a great site, and a great way to get involved in Mars exploration and learn about everyone's favorite Red Planet and the people who are fascinated by it. What are you waiting for? Head on over and sign up! I'll see you on Mars!