As I post this, NASA is holding a press conference in which they are announcing that the Mars Science Laboratory's launch date will be slipped by two years, a delay which will cost about $200 million. MSL has been getting a lot of unpleasant attention lately due to some very bad cost overruns, and a few months ago, NASA made the decision to press on and attempt a launch in fall of 2009. Unfortunately, it looks like ongoing engineering problems are making it look impossible to meet that deadline, despite engineers working double and triple shifts. 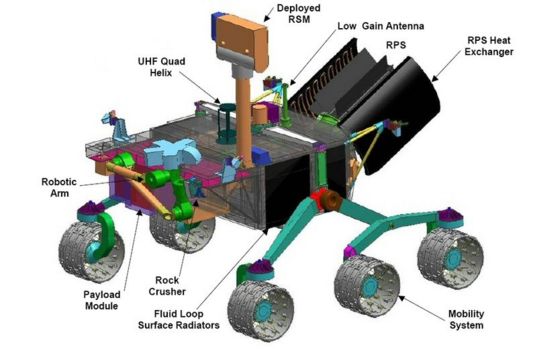 MSL is a big rover, about the size of a small car. It will push the state of the art in NASA engineering, but that also means that things sometimes don't work the way they were expected to, which causes cost overruns and delays. For example, the original heat shield had to be redesigned because it takes a lot more to slow a big spacecraft down than it does for a small one, and the original design just wasn't going to cut it. The MSL heat shield is the same technology that will be used to return humans to earth in the Orion capsule, so it is especially important that it work well. To save money, several of the instruments have been "de-scoped": reduced in capability so that they cost less. The cameras were supposed to have a zoom capability, but now as a compromise, one eye is permanently zoomed in and the other is wide angle. The rock grinding system was also changed from its original design to cut costs, and the ChemCam instrument was on the chopping block until that instrument team managed to work out a lower cost.

One of the biggest problems has been with the actuators, or joints, that allow the rover's arm, mast and other parts to move. They were initially going to be designed with a new "dry lube" technology that would allow the rover to operate at very low temperature. That technology proved very difficult to make work, and in the end, the engineers shifted to using more "traditional" actuators. Of course, that leads to increased costs, and more work and eventually, delays.

The extra $200 million or so will have to come from the Mars exploration budget first, but it's doubtful that the Mars program will be able to foot that entire bill. And that means that the money will have to come from somewhere else in NASA. MSL has been very unpopular as everyone watches is eat through its budget, fearing that their funding might be next. Now with this delay and extra cost, it looks likely that MSL may have to draw upon the budget of other science programs such as the outer solar system and astrophysics. I'm sure the press conference will have something to say about this.

It's awkward to be a scientist involved in the MSL mission but in no way involved in the overruns. I find myself simultaneously lamenting NASA's bad habit of going over budget and defending the far-over-budget MSL. It is unacceptable for missions to routinely go over their projected budgets, but that is how NASA has worked for a while now. But on the other hand, it does no good to cancel every mission that goes over, because they all go over, and you'd end up with a bunch of partially completed missions and no operating ones! It's a sort of a chicken and egg problem, and breaking the cycle is going to be painful.

For now, I hope that the Mars community can scrape together enough funds to pay for this delay without having to steal money from other science groups. This will almost certainly have an influence on the future of Mars exploration even if it doesn't effect other non-Mars missions. As I find out more about what this means for the future, I will share it with you here.