The next landing site that we heard about was Holden Crater. Holden is a 154 km diameter crater formed early in martian history that happened to fall smack in the path of an extensive fluvial system. There was a long chain of craters connected by water-carved channels— and then the Holden impact occurred and interrupted that flow. It looks like Uzboi Vallis, one of the channels, then breached the rim of Holden crater and began to fill it with water, but there is no exit breach, so the Holden basin apparently became the end of the line for water. When Uzboi Vallis broke through the crater wall it caused a pretty violent flooding of the crater and carved into light-toned layered deposits that may have been laid down by an existing lake. 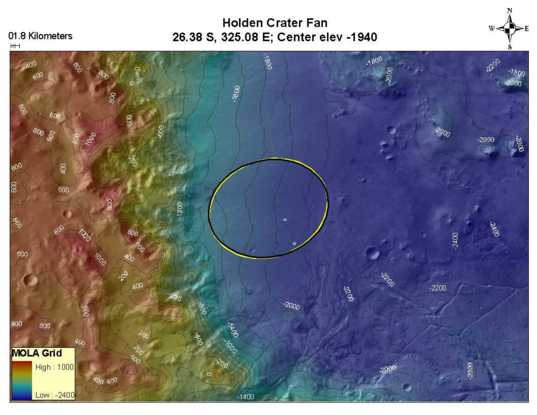 The landing ellipse is on a "bajada" which is a fancy term meaning lots of alluvial fans. (an alluvial fan is a fan-shaped deposit that forms downhill of a rocky location eroded by water) The bajada is nice and flat, but still contains some interesting inverted channels, and studying the fans could tell you about how much water was available to form them. In other words, the fans could tell you about the early climate on Mars!

There are light-toned layered rocks at the edge of the fans and near the Uzboi Vallis wall breach that look like they were probably deposited by a lake. These rocks have very thin layers that can be traced for many kilometers in HiRISE images. The lower units of these deposits also have a clay signature, which is good for the preservation of life. An interesting point was that the clays appear in both the crater rim and the layered deposits in the crater, so we may have an identified source and sink.

In the discussion of this site, someone brought up the fact that the clay signatures at this site are not as strong as those for Nili Fossae or Mawrth Vallis. But the response to that was that there is not a one to one correlation between spectral signature and abundance. Lots of other complicating factors such as grain size, mixtures, and optical properties of the crystals are involved.

To me, Holden seems like a fine site, but I got the impression that i just doesn't have people excited. This may be because it doesn't have a large group following like some other sites do. On the other hand, it has some diverse morphologies and interesting mineralogy, and could teach us a lot about the early climate on Mars. Still, my prediction is that it won't survive this week because for whatever reason it does not have people as excited as other sites.