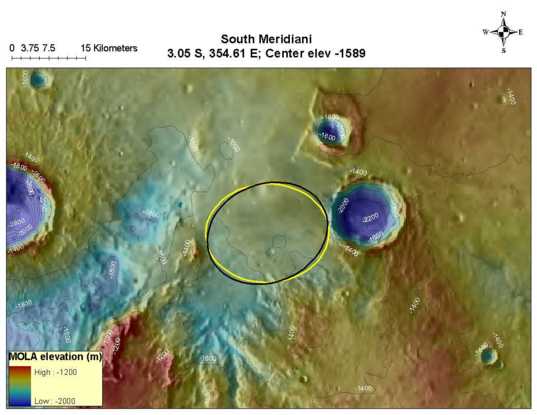 The site has good context, in that we would land on the same sort of material that Opportunity is studying. However, the context for the phyllosilicates in the hills is basically zero. We don't know where they came from or how they got there.

For diversity of mineralogy, the rocks in the ellipse are probably sulfate-bearing just like the ones Opportunity sees, and are also rich in hematite (probably more blueberries). South of the ellipse, the clays in the hills are pretty diverse, with different chemistries.

Habitability? Well, we are pretty sure the Meridiani rocks were once soaked in groundwater, but that water may have been a very salty and acidic brine. We don't really know about how the phyllosilicates got there, but if they were marine or lake sediments, that would be great for habitability. However, they could also be crater ejects, which is somewhat less good.

As far as preservation goes, both sulfates and phyllosilicates are good at preserving organics under some conditions, so you would have two different, but good chances to see preserved biomarkers.

The mission at south Meridiani would be three phases. Phase 1 would be landing on the Meridiani plains and using the new tools on MSL to better understand the same general rocks that Opportunity has been studying. MSL would land in a place that is in lower layers than Opportunity, so would fill in some of the earlier story. Phase two would be driving south to the contact between the Meridiani plains unit and the ancient clay-bearing hills. And phase three would be exploring the hills.

The discussion phase once again brough up some tough and important questions about the site. Someone asked whether, when we cross the boundary between the plains and the hills, we are seeing the transition between a sulfate-forming environment and a clay-forming environment, or are we just seeing "before and after" and missing that transition. Someone pointed out that even if there are "missing layers" due to some period of erosion or non-deposition, that still contains information, because the surface would be weathered and altered before the new rocks were laid on top.

Someone else pointed out that this is a perfect example of an interesting mineralogy site, but with no context. We don't know the whole "source to sink: story of the phyllosilicates. It was compared with all of the interesting rocks that Spirit has seen in the Columbia Hills: all very cool, but hard to piece together into a story.

Another very important question was whether the clay-bearing rocks had any distinctive appearance. Because MSL will probably not be able to identify them from very far away. (at best, ChemCam, the laser, might be able to...that's part of my future research, so we'll see) There wasn't a good answer to this, though the phyllosilicates are seen in somewhat diagnostic "fractured" rocks.

The bottom line is that this site would be interesting because we would learn more about Meridiani, and would be able to cross a transition and explore very old clay-bearing rocks. However, the context for those clays is pretty weak, and we might end up being totally confused due to that lack of context. This site does have the advantage that it is incredibly safe. Meridiani Planum is FLAT. I don't think it's the best science site, but it is an acceptable science site, and it may end up surviving or being brought back later on because it is so easy to land on.