Miyamoto crater is an ancient crater about 150 km southwest of where the Opportunity rover is right now. It probably formed in the earliest stage of Mars history, and was then subject to lots of erosion by water, followed by being partially or completely buried by the same material that make up the Meridiani plains. Then, erosion exposed it again. 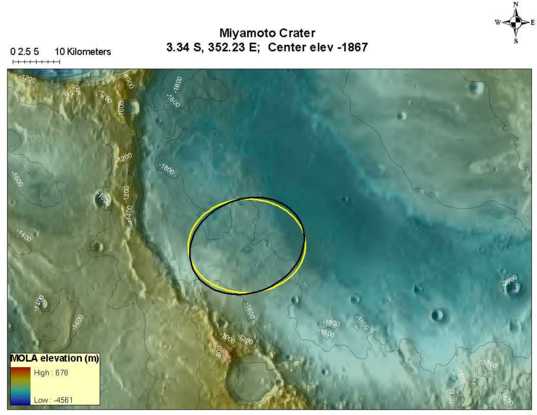 The potential landing site has some interesting mineralogy, particularly evidence for phyllosilicate (clay) minerals. We were told that there are possible salt deposits west of the crater, but they are outside the crater rim, and I thought it was a little artificial to include those as part of the site's compositional diversity, since they are 40 kilometers away, we probably cant get to them, and we're not even sure that they are there.

As far as geomorphology, it is likely that the site was once part of a regional channel system, and there are a lot of "inverted" channels on the floor of the crater. An inverted channel is a river bed that became harder than its surroundings (this can happen for a variety or reasons), so when erosion happened, the riverbed lasted longer and ended up as a ridge rather than a trough. On the east edge of the site is the boundary of the layered Meridiani plains material, and it would be interesting to drive the rover from the clay-bearing landing location across the transition to the sulfate-bearing Meridiani stuff.

It was argued that this site would be good for preservation of organics mostly because it has phyllosilicates, but also because the inverted channels may have trapped organics in the cement that made the channel hold together.

The discussion of this site brought up a lot of interesting points, and although it was civil, there were a lot of tough questions asked, which is a good thing. I hope all of the sites get grilled to the same extent. There was some question of whether the inverted channel was really formed by water, or if it was if it could have been filled later, for example by lava taking advantage of the pre-existing trough. It was claimed that the inverted channels branch, but I've never seen them do that. Someone also pointed out that the fact that there are channels on top of the clay-bearing rocks implies that after the clays formed, they were flushed with water over and over. That's bad for preserving organics, as we heard in the morning. Ideally you would want a consistently wet environment, which then became dry and stayed that way.

Finally, one of the accepted experts in geomorphology in the room got up and pointed out (somewhat confrontationally) to everyone that he had seen lava flows in this crater years ago, and that there was also no evidence of the regional flowing water that had been claimed!

Personally, I don't think this is the site to go to with MSL. There is not enough known about it, and there are other sites that have much better examples of everything that this one has. I am doubtful that it will survive the process.