Coming up next week is the 3rd Mars Science Laboratory Landing Site Workshop, where the Mars science community will come together to narrow down the possible landing site choices for MSL. There have been two similar meeting before this one, and I was lucky enough to attend the one last year. In fact, some of my first blogging experience was summarizing the three days of that meeting. 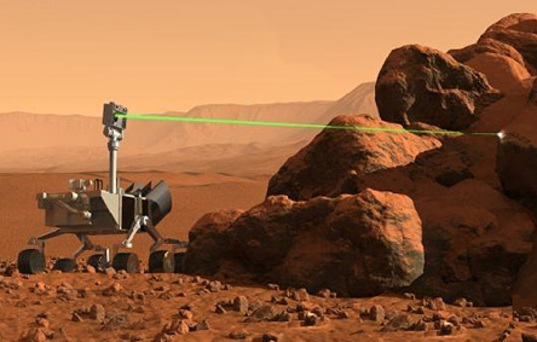 An artist's rendition of Curiosity at work

I will be going to this year's meeting as well, and will be blogging about the events as they unfold. To prepare you all for those posts, I thought I bring everyone up to date by re-posting my summaries from last year's meeting here. So, without further ado, here is the Day 1 summary from the 2nd MSL Landing Site Workshop (copied from my old blog):

Today was the first day of the 2nd Mars Science Laboratory landing site workshop in Pasadena. We began bright and early by cramming into the conference room and reviewing the goals of the mission, the goals of the meeting, and some of the constraints that we need to keep in mind as we decide on a landing site.

The mission science goals are to assess the past and present habitability of Mars by studying the geology and geochemistry of the landing site, searching for signs of biology (past or present), seek evidence of processes that influence the habitability, and study the current radiation environment. To do this, MSL has a pretty impressive suite of instruments, described here.

The goal of this meeting is to get the community together to narrow down the more than 50 potential landing sites to about 5, including a "safe haven" site and an "uber safe haven" site. There are some pretty strict engineering guidelines that must be followed, such as avoiding sites with steep slopes, lots of rocks, or at high elevations. In addition, we ideally want the sites selected to be scientifically interesting.

After hearing from the engineers this morning, we heard from representatives of some of the major data sets, including HiRISE (high resolution imaging), OMEGA (mineralogy), and CRISM (better resolution mineralogy). There was a lot of discussion of what certain minerals mean for the past habitability of Mars, and it looks like clay minerals, which generally form in water-rich environments, are pretty good at preserving evidence of life. This is because clay mineral crystals form thin sheets, which can sandwich organic molecules between them.

In the afternoon, we began to hear from some of the proposed sites, grouped roughly by category. Today's category was "layered deposits in craters", and there were five very interesting sites proposed. All of the sites had some form of evidence suggesting that the crater may have been filled with water at some point. Most compelling were a couple of craters that have the remains of river deltas clearly exposed. River deltas only form when a fast-moving stream encounters a slow moving body of water and drops its sediment, and they imply long-term stable water, which is obviously good for habitability.

We finished off the day by attempting to rank the sites in terms of how well we think we know their geologic context, their potential as past habitable environments, their potential for preserving evidence of habitability and how well the MSL instruments can asses the habitability. This was a pretty difficult process, because we were only allowed to rank each site as "red", "yellow", or "green" in each category. In most cases, this was a very ambiguous decision, and we literally went around the room and took a show of hands.

It was a very full day, and the next two days should be even busier. I'm looking forward to seeing where this process leads us at the end of the day on Thursday.

For another (less rambling) perspective on the meeting, check Emily Lakdawalla's posts at the planetary society blog.