John Spencer just sent me another update from the Cape. --ESL

Wow! Now it's real. We'll probably be past the Moon by the time I mail this off to Emily. We just got back from the real post-launch party, following two non-post-launch parties on the last two evenings. This was more like it. Whoops and hollers and congratulations all around, but especially for the launch team. This was their day -- they performed magnificently, launching the most-powerful-ever configuration of Lockheed Martin's Atlas V rocket, and the third stage built by their arch rivals Boeing, faster than any rocket had gone before, and doing it flawlessly.

Though I haven't seen any actual numbers yet, provisional reports suggest we are very close to our planned trajectory, which is great news for the science team, because less of the spacecraft's fuel will be needed to fine-tune the trajectory to Jupiter, and more will therefore be available to steer us to a Kuiper Belt object after the Pluto encounter. We have also, as they say, "retired a lot of risk" -- the most dangerous part of the mission is over and the spacecraft is in the environment it was born for (as Arthur C. Clarke once wrote, space is a benign environment, at least for ships designed to sail in it). One of the ceremonies at the party was to burn copies of the very detailed contingency plans that had been developed to cover all possible launch failure scenarios. We won't be needing those any more.

I'm still processing the actual launch experience. We were twice as far away from the rocket as we had been two days earlier, due to shifting winds, but we had a fine view of the rocket across the lagoon. The spectacle was brilliant, amazing, and over very quickly as the rocket disappeared into the clouds. Everyone said "don't try to photograph the launch, just experience it", but I'm a die-hard photographer and my instincts to point my camera at anything amazing got the better of me. So I saw too much of the launch through my viewfinder. Still, my memory of the event is mostly of the emotion, not the spectacle. The joy was overwhelming as we saw our baby go. We were all hugging each other very hard until the buses revved up to take us back to the visitor center.

Now the engineers have done their work so magnificently, it's time for us scientists to get to work. Once the trajectory folks can spare the time from making sure we're pointed in the right direction, we'll be getting the details of the Jupiter flyby geometry from them. Then we can finalize our plans for the Jupiter encounter now only thirteen months away. 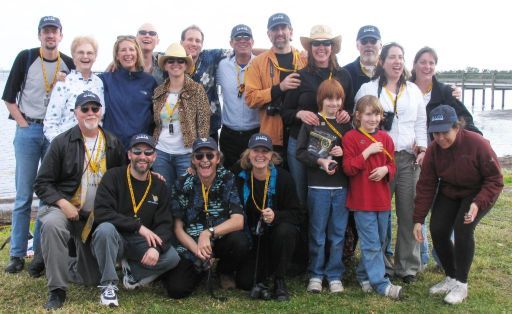 Just after the launch of New Horizons

Ecstatic members of the New Horizons science and engineering teams, with their friends and relatives, just eleven minutes after the launch.