New Horizons science team member John Spencer just sent me another entry on the preparations for the approaching launch of New Horizons to Pluto. --ESL

New Horizons just experienced what we hope will be its last ever sunset on Earth. There will be three more sunsets to come. The next will be about 20 minutes after launch, as the spacecraft plunges into the Earth's shadow and prepares for the final rocket burn that will take it out of orbit. Its last-ever pair of sunsets will be behind Pluto and Charon nine years from now, as we use the setting Sun as a probe of their atmospheres. After that the rapidly diminishing sun will shine on our spacecraft forever, though the Sun will eventually be indistinguishable from the billions of other stars in our galaxy. Heady stuff.

This has been a day that I'll never forget. This morning the science team and some press folks gathered at a viewing area near the launch pad to watch the spacecraft slowly make its way from its hanger to the pad, a process that took about half an hour. Once the rocket was in place, and the work to configure it for launch got under way, we were able to approach within a few hundred feet, and pose for pictures that we'll always treasure. Here's mine (thanks to Rick Binzel for taking the photo). 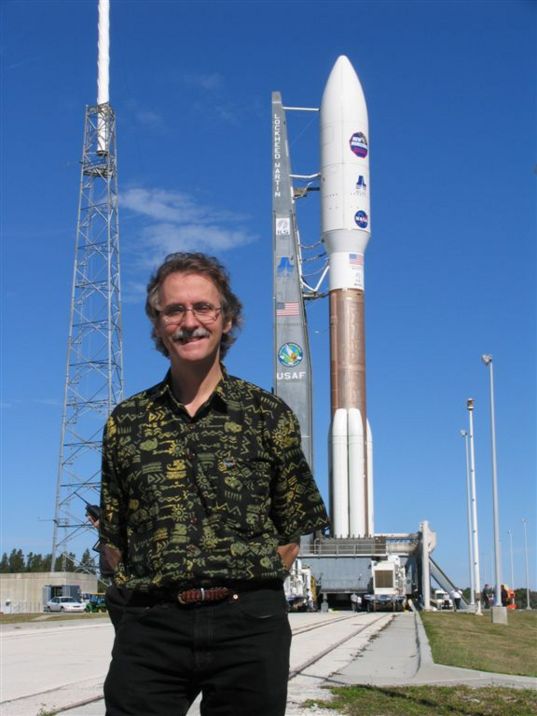 I could barely take my eyes off the rocket -- an astonishing thing to see. I've worked on planetary missions for most of my career but I've usually become involved after launch, so I've never before seen this stuff up close. Just awesome.

Tomorrow should be even more memorable. The weather forecast still looks good and so far there are no technical hangups. Wish us luck!