New Horizons science team member John Spencer sent me another entry last night on the preparations for the approaching launch of New Horizons to Pluto. --ESL

I'm at home on a Sunday morning, five days before leaving for the Cape (assuming the current launch schedule, with the first launch opportunity on January 17th, continues to hold). I'm musing on space songs, as I listen to David Bowie's Space Oddity, which recaptures for me the romance of spaceflight as I felt it as a teenager in the 1970s, and as I feel it still. That other classic astronaut song, Elton John's Rocket Man, also comes to mind, along with two powerful memories it invokes. First, from the summer of 1975, just before I went to university to pursue my dream of an astronomy career, listening to records while polishing the floors of the Scottish hotel where I was working. Second, from just a couple of months ago on my first ever visit to Kennedy Space Center at Cape Canaveral, listening to the car radio as I explored that hallowed place after a New Horizons Science Team meeting. The song has maintained its appeal through all those years -- the teenage space nut lives on within the middle-aged planetary scientist. So what if "Rocket Man" is about disenchantment with space travel -- it's a song about space and that's good enough for me.

Both those songs focus on the human experience of spaceflight -- it's hard to imagine a Top 40 song about one of our wonderful robots. Too bad. The late Jonathan Eberhart, folk singer and space correspondent for Science News, wrote some great songs about Mars and the Viking mission in the 1970s, though I think only one, Lament for a Red Planet, was ever recorded, on his album Life's Trolley Ride. But thanks again to the enduring appeal of our enigmatic target, Pluto and (by extension) New Horizons have their own song popular enough to be available via iTunes -- Christine Lavin's hilarious 1997 ditty Planet X, about the discovery of Pluto, the debate over its status as a planet, and NASA's plans to explore it. As the song says, "for a little guy, you've made quite a splash".

My slide show for the pre-launch party is almost complete. It weighs in at over 400 slides -- yikes. I suppose I'll have to trim it if I expect anyone to watch the whole thing at the party. But we'll keep the unedited version too -- it's pretty cool to have a pictorial history of the project at this level of detail, to organize all those fading and blurring memories of 13 years of e-mails and teleconferences and proposals and team meetings into some sort of coherent order, and to fill in some of the engineering story from our own Rocket Men (and women) -- the folks who actually designed and built the spacecraft. Amazing to watch all those years of abstract planning turn into something very real, to watch a CCD array millimeters wide integrated with a camera a foot across, bolted onto a spacecraft about the size of its designers, and finally to see that spacecraft hoisted atop its massive rocket, the whole 200 foot tall edifice poised to hurl itself off the planet very soon. Nine days and counting... 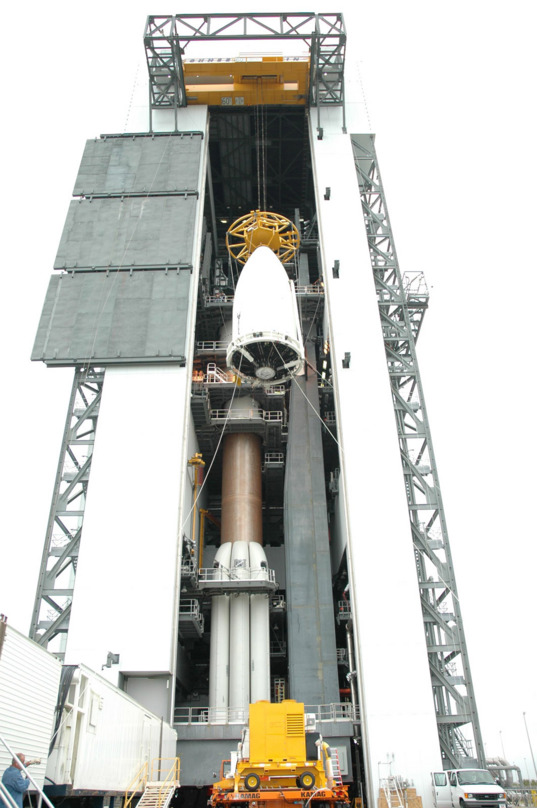 New Horizons is lifted atop its Atlas V

In the Vertical Integration Facility on Cape Canaveral, Kennedy Space Center, on December 17, the fairing enclosing New Horizons is lifted atop its Atlas V rocket.