At the absolute very last moment available in the window of today's three launch opportunities, the Lunar Reconnaissance Orbiter and LCROSS blasted off on board an Atlas V/ Centaur rocket at 5:32 PM EDT from Launch Complex 41 at Cape Canaveral Air Force Station in Florida. The duo of robotic spacecraft are the first steps in the return of the US to exploration of Earth's moon. Together they will return a wealth of new scientific information in unprecedented detail. 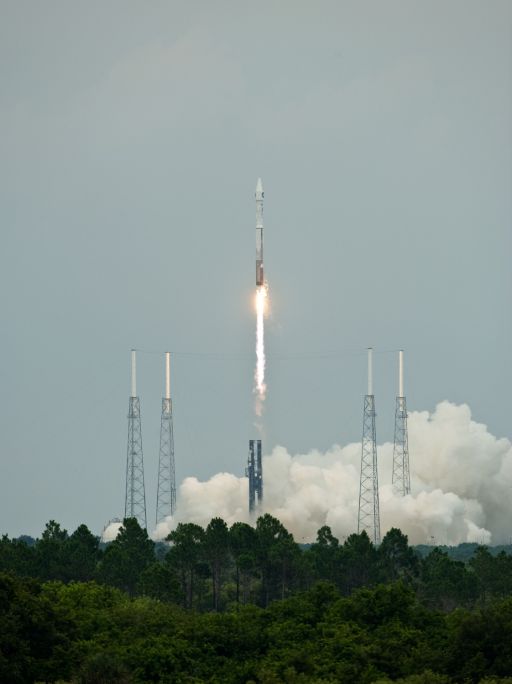 railing a column of fire, the Atlas V/Centaur carrying NASA's Lunar Reconnaissance Orbiter & Lunar Crater Observation and Sensing Satellite hurtles off Launch Complex 41 at Cape Canaveral Air Force Station in Florida on June18 at 5:32 PM EDT.
he piggybacked spacecraft pair were rolled out yesterday by United Launch Alliance from the Vertical Integration Facility (VIF) atop their 19 story Atlas V rocket to the pad at Space Launch Complex 41 for the first leg of their journey to space. Twin track mobiles (see my photo below) which I saw during my visit to Complex 41 in late May pushed the stack on the 1.4 million pound Mobile Launch Platform some 1800 feet over about 35 minutes time to the pad. 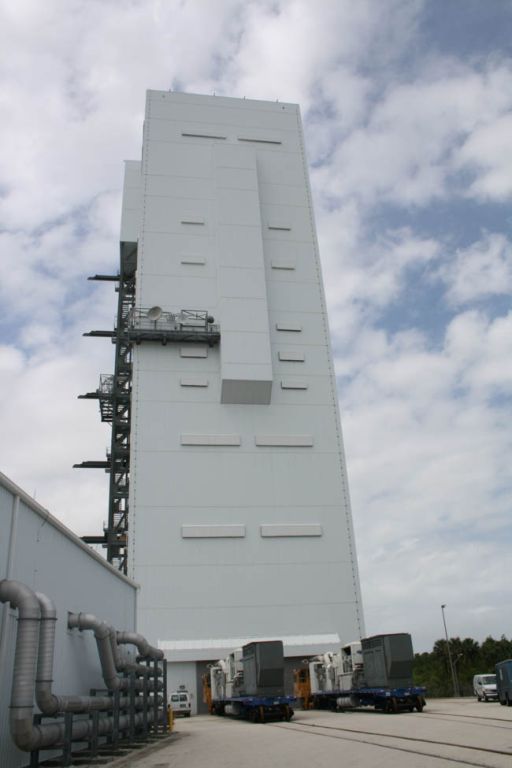 visited Atlas V Launch Complex 41 in late May. This view of the rear side of the VIF shows the two powerful tractors named "trackmobiles" (bottom, center) that pushed the Atlas rocket/LRO/LCROSS stack today about 1800 ft on a rail system (note rail tracks lower right) from the VIF to Launch Pad 41. The Atlas V/Centaur rocket components and payloads are assembled and integrated inside the 30 story tall VIF. All launch vehicle integration and spacecraft processing activities are carried out in the VIF. There is no permanent gantry and no access to the spacecraft at the launch pad.
he countdown was begun at 10 AM EDT today and targeted a liftoff at 5:12 PM. There were two more opportunities available at 5:22 PM and 5:32 PM EDT, each just 1 second in duration.

After a planned built in hold, the countdown resumed at 2:50 PM EDT at T-minus 2 hours and counting and fueling was begun. There is a final built in hold at T-minus 4 minutes which lasts for 20 minutes until the final "Go" is given for launch.

The 34 foot long Centaur second stage was fueled first and filled with 4,300 gallons of super cold liquid oxygen at Minus 298 degrees F. While this was in progress, the propellant lines are then chilled down to Minus 423 degrees F for the transfer of about 13,000 gallons of liquid hydrogen propellant into the rocket. The Centaur has a single RL-10 engine which will be fired twice today to shoot LRO and LCROSS to the moon. The Atlas Payload fairing is jettisoned after the 1st burn.

This is a special Centaur that has been painted white for thermal conditioning for the LCROSS mission. It took about 1 day of processing inside the VIF at Complex 41 to attach the spacecraft payload and fairing to the Centaur. The Centaur was specifically designed in the 1960's as the first upper stage with the ability to conduct lunar and planetary science missions. So this flight is a return to its roots.

Fueling of the first stage Common Core Booster with 50,000 gallons of liquid oxygen began at 3:19 PM. The first stage is also fueled with 25,000 gallons of RP-1 which is highly refined kerosene. The bronze colored first stage will turn almost completely white after cryogenic tanking begins as the rocket frosts over.

The weather forecast this morning was initially at 60% favorable with a potential threat of thunderstorms and anvil clouds. But as the afternoon progressed, lightening and cumulous clouds approached too close to within 10 miles and which violates the Launch Commit criteria. The weather conditions entered a "red" condition around 4 PM EDT, just over 1 hour before liftoff. The NASA commentator said that for awhile it truly seemed like there was no hope for launching today. Fueling was completed as planned with no weather delay.

Finally, at 5 PM the team decided to delay the launch and switch to the 3rd window as the only possibility for a launch with acceptable weather today. The team had to make a last second decision on which window to target in real time. It was a tough choice according to the NASA Launch Director Chuck Dovale, because the weather was very difficult to predict and they could have completely lost today's launch attempt if they had chosen the wrong window.

At 5:17 PM the weather suddenly turned back to "green" for a 5:32 PM launch attempt in just 15 minutes. These are typical summertime conditions in Florida. No others technical issues or problems were preventing a launch other than weather.

The spacecraft were switched to internal battery power at 5:21 PM and at the final poll of the launch team managers everyone indicated "GO" for liftoff. The rocket had noticeably turned white from frosting.

At 5:28 PM the "GO" command was given to come out of the built in hold and resume the countdown at the T minus 4 minute mark !

The Atlas first stage and Centaur upper stage were switched from ground power to internal batteries at T-minus 2 minutes.

The computer launch sequencer picked up the launch countdown as planned at T minus 1 min and 55 seconds.

Liftoff from pad 41 occurred at 5:32 PM for these two missions to the moon that mark the first lunar foray for NASA's Constellation Program that aims to return humans to the lunar surface.

The Atlas V is flying in its most basic 2 stage configuration with no strap on solid rocket boosters. This version has flown six times previously. The first stage Common Common Core Booster is propelled by a Russian designed and built rocket engine, the dual chamber dual nozzle RD-180 which fired flawlessly for 4 minutes with about 900,000 pounds of thrust. Telemetry is streaming into both NASA and the Launch Control Center at the Atlas Space Operation Control Center (ASOC).

A camera mounted on the side of the Atlas rocket displayed a beautiful wide launch view to the ground and Florida coastline as the duo ascended into space for about the first 5 minutes. The 1st stage jettison at 4 minutes and 18 seconds into the flight was clearly visible. The RL-10 engine on the Centaur ignited on time just seconds thereafter at 4 minutes and 23 seconds.

The payload fairing protecting and encapsulating the spacecraft then separated into two halves as designed at 4 minutes and 32 seconds. The spacecraft were momentarily visible from the Atlas camera. It was a remarkable view. I had seen both LRO and LCROSS just a few weeks ago in the "cleanroom" at Astrotech and easily recognized various features from both. Incredible !

The first Centaur burn continued for 10 minutes and then shut down as planned. The stack coasted around earth for 24 minutes until the second Centaur burn was initiated at T Plus 37 minutes and lasted for 4 minutes.

LRO spacecraft separation occurred on time 3 minutes later at 45 minutes into the flight and it was released for its own separate 4 day journey to the moon. Launch controllers broke into load applause. LRO had successfully deployed its solar arrays and communications antennae by 8 PM EDT

LRO will fire a braking rocket next Tuesday to be captured into lunar orbit and then enters a 2 months elliptical commissioning orbit and begins to provide targeting information to LCROSS.

For the next few hours the Centaur used special procedures to deplete and vent as much residual fuel as possible to minimize contamination at the impact site. NASA announced this evening that LCROSS was successfully powered up and is also fully functional. The official transfer of control from the Centaur to LCROSS occurred at 9:30 PM EDT. The combined LCROSS/Centaur stack are taking a completely different path to the moon. They will remain attached for the next 4 months and will go into a wide looping earth orbit until the lunar South Pole impact tentatively set for the Cabeus region at 7:30 AM on 9 October 2009.