NASA managers decided today to delay by one day the June 17 dual launch of the Lunar Reconnaissance Orbiter (LRO) and Lunar Crater Observation and Sensing Satellite (LCROSS) in order to accommodate a postponed launch attempt by Shuttle Endeavor. The lunar pair are now set to blast-off together on board an Atlas V rocket on Thursday, June 18, from Cape Canaveral Air Force Station, Florida. There are three late afternoon launch opportunities at 5:12 PM, 5:22 PM and 5:32 PM EDT.

The change in plans is due to overlapping launch windows for LRO/LCROSS and the likewise high priority STS-127 Space Shuttle Endeavour construction flight to the International Space Station. The conflict arose when the June 13 launch of Endeavour was scrubbed in the final hours of the countdown because a leak was discovered in the gaseous hydrogen venting system outside the shuttle's external fuel tank. The system is used to carry excess dangerous hydrogen safely away from the launch pad and prevent an explosion.

The launch windows for both missions are extremely tight and closes for both after Saturday June 20. Generally a turnaround time of 48 hours is required between launches to reconfigure all telemetry and tracking systems and hardware on the Air Force Eastern range to support a launch. The best way to maximize launch opportunities for both missions is by attempting a morning launch for Endeavour on June 17 and an afternoon launch of LRO on June18.

Endeavour's leak is similar to what happened during the first launch attempt of shuttle Discovery's STS-119 mission in March. Technicians are using the same repair method, which led to Discovery's successful launch on its next attempt. Internal seals in the Ground Umbilical Carrier Plate (GUCP) are being changed out. GUCP is attached to the external tank. The repair work is going well and the countdown should resume at 1:15 PM Tuesday afternoon at the T-11 hour point.

The current weather outlook for LRO launch on June 18 is 60% favorable due to possible afternoon thunderstorms and cumulous clouds. Launch processing is underway. If liftoff is postponed to Friday, the launch times are 6:41PM, 6:51PM and 7:01 PM. Saturday's opportunities are 8:08 PM, 8:18 PM and 8:28 PM. All times EDT. 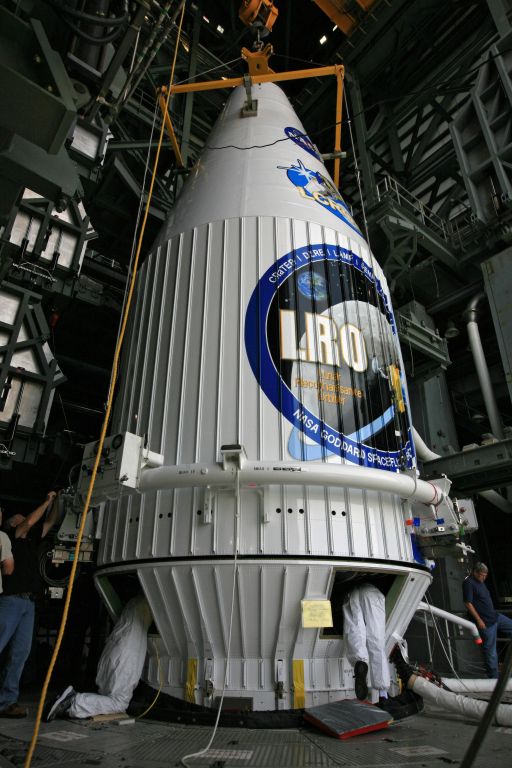