The Spirit rover on Mars is currently stuck in a patch of loose material. After a few attempts to get free, the team has wisely decided to do further experiments on Earth instead of on Mars. They will now recreate the conditions in our sandbox at JPL and test out different sequences until one works reliably here, then try it on Mars.

We've been here before. In 2005 Opportunity got stuck in a sand dune. Here is a picture of some testing in the sandbox we did then. After some clever ideas and a lot of testing, Opportunity was free a few weeks later. So we should be able to dig out Spirit too, right? 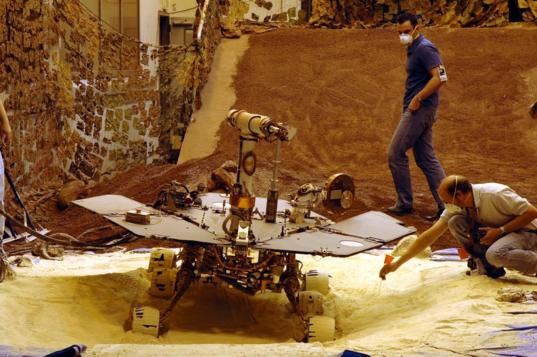 I sure hope so. However Spirit has a few more handicaps. First, one of Spirit's six wheels can't be driven anymore, and because of the high gear ratio, can't turn at all. So that wheel acts more like an anchor than a wheel when trying to move. This has resulted in serendipitous discoveries as that wheel digs a trench while being dragged by the other five wheels. But it will make getting free more difficult. The second handicap is that Spirit is in very bumpy terrain. That restricts how Spirit can move, in order to avoid driving the bottom of the chassis aground, which would take weight off of the wheels. That would further complicate getting unstuck.

The good news is that Spirit recently had a significant solar panel cleaning event. The one that we've been waiting for for a long time. So there is a good amount of energy every Martian day for when the team is ready to try to get Spirit free.

In the meantime, Spirit will sit still and take pictures while the team on Earth figures out what to do. Stay tuned.