Hayabusa2's Approach phase has begun with a new photo of Ryugu!

Hayabusa2 has officially transitioned from cruise to Ryugu approach mission phases. On June 3, the spacecraft ended use of its ion engines, for now, and is now coasting the remaining distance toward the asteroid. It's using an optical navigation camera to image the asteroid's position against a field of background stars to help it navigate. Most of those images over-expose the asteroid to make background stars visible, but since Hayabusa2 is now close enough to resolve the asteroid as more than one pixel, they took a shot at a much shorter exposure to reveal Ryugu. Are you ready? (Drum roll) here it is... 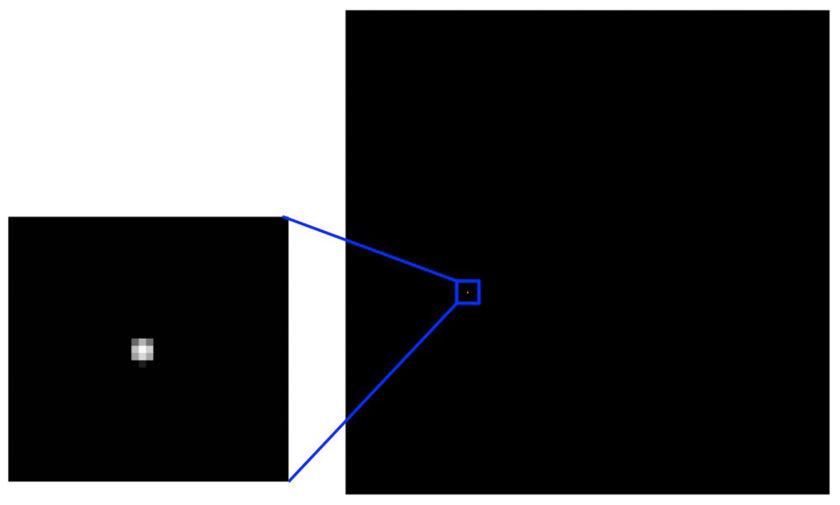 Hayabusa2 was 2600 kilometers away from asteroid Ryugu when it took this photo, among the first to resolve the asteroid as more than one pixel. The resolution of the image is about 300 meters per pixel; as Ryugu is about 900 meters across, no details are yet discernible on the surface.

No, Ryugu isn't a Borg ship; it's just very small, less than a kilometer in diameter, and each of the pixels in this image is about 300 meters across. So while Hayabusa2 can resolve the asteroid, that's not saying much. It'll be a while yet before we can see if Ryugu has a markedly nonspherical shape, and even longer until we can see surface features. But we're on the way!

Learn more at JAXA's website (they also have a long-exposure image where you can see the stars), and check out my earlier post on How to keep up with Hayabusa2.

Can one make out from the pictures till now whether Ryugu is rotating?