Last week, I received a golden ticket that gave me rare access to a sacred space: the cleanroom facility at Vandenberg Air Force Base where NASA's next Mars lander, InSight, is undergoing final preparations for launch. The Planetary Society's filmography wizard Merc Boyan accompanied me, and we shot various video that you'll be seeing later, including in The Planetary Post later this month. In this blog, I'll just have stills for you, most of them less silly than this one, which was not taken inside the clean room, but rather inside the control room from which engineers will operate the spacecraft during liftoff.

Hi from Vandenberg Air Force Base where Merc Boyan and I got a chance to enter the clean room and see InSight before it launches to Mars! This month’s Planetary Post will feature close up and personal video with the spacecraft and PI Bruce Banerdt! pic.twitter.com/m0oVaWWkCj

It was my third cleanroom visit, my second to see an actual spacecraft, and my first at a launch facility. I have been inside clean rooms at JPL twice, once to see Curiosity and another to see the LDSD test vehicle.

This visit was very, very different from the one where I got to see Curiosity. The spacecraft was fully assembled but not undergoing final preparations. The mood was anticipatory but relatively relaxed. We had stacks of time to wander around the wide-open space of the JPL High Bay (within limits imposed by stanchions), take lots of video, do interviews, record our own video, take lots of photos.

Things were very different at Vandenberg. We were dealing with a fully fueled spacecraft just weeks away from launch. Any mistake, no matter how tiny, could jeopardize the launch. We were prepped at length on the importance of planetary protection. Media were robed up, ushered in to the room only in groups of three and evacuated before the next group allowed in. That gave us just minutes inside. Merc and I got about three minutes to interview Bruce Banerdt, another two with a senior manager and an engineer, and then were told we had to go. It was all a bit of a rush, so I didn't get time to sit and reflect with the spacecraft that was really going to Mars. But I got a few pictures, and will reflect now!

For the scientists, it'll be a very long wait until landing. Everything is pretty much in the engineers' hands until then. Banerdt told me he's only been in the clean room with his spacecraft maybe four times, total. He was happy and excited to be so close to launch, finally. 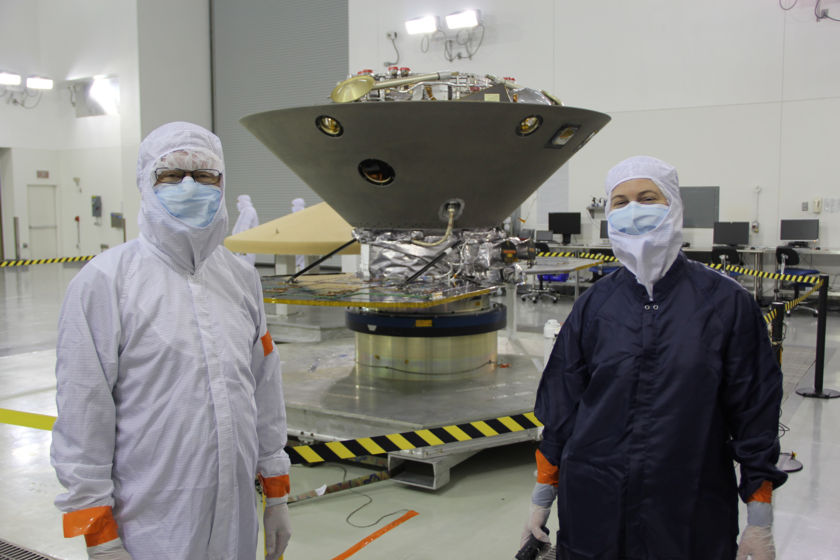 JPL's Bruce Banerdt (left) is the Principal Investigator for the Mars InSight mission. Emily Lakdawalla (right) is Senior Editor for The Planetary Society. The two met in the clean room with the InSight spacecraft as engineers performed final assembly operations in preparation for launch.

Here is the spacecraft. We built it on Earth. It's about to leave Earth. It's going to go to another planet. 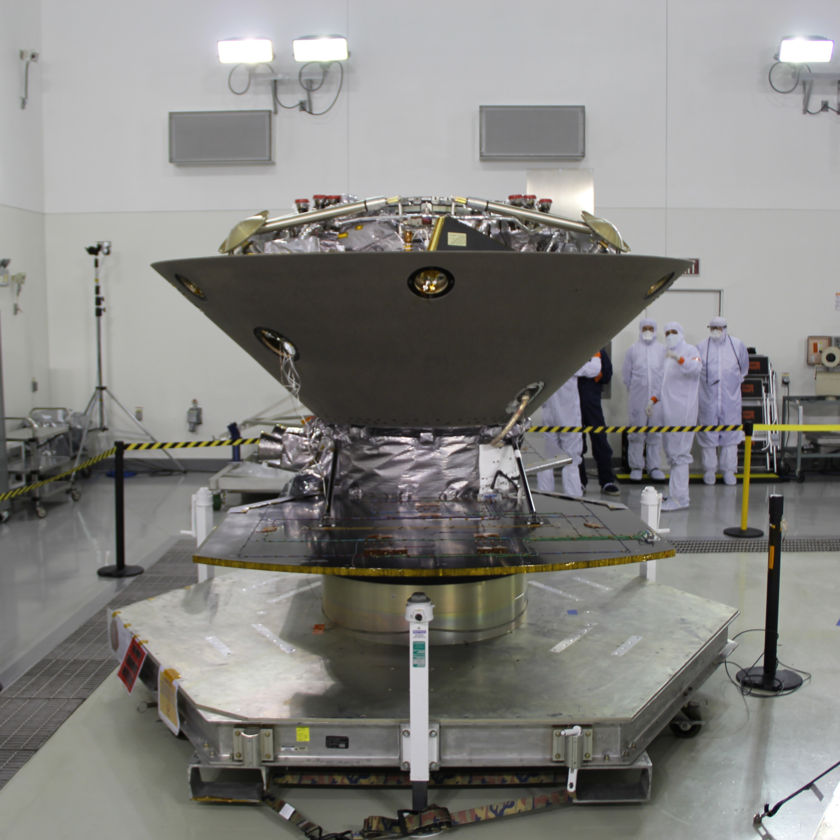 At the Astrotech payload processing facility at Vandenberg Air Force Base on April 6, 2018, engineers readied InSight for launch. The spacecraft is in launch configuration, upside down with landing legs tucked against the body, packed inside its backshell. Red caps cover the landing rockets, which are pointed up. The backshell is, in turn, attached to the cruise stage. The remaining step is to cap the assembly with a heat shield.

Packed for launch, the spacecraft is a bundle of possibility. We can hardly see the part of it that will operate on Mars. Right now, it really is a spacecraft, a vehicle designed to fly in space. The flat platform at the base is its solar panels. At left, the two cones sticking out the sides are star trackers, cameras that will help it navigate to Mars.

Nearby lay the heat shield. (Thanks very much to Robert Pearlman for sharing his photo with me; we didn't get our own photo. Robert was in the clean room after we were.) This will cap the aeroshell, protecting the lander during entry. It's so much tinier than Curiosity's was. 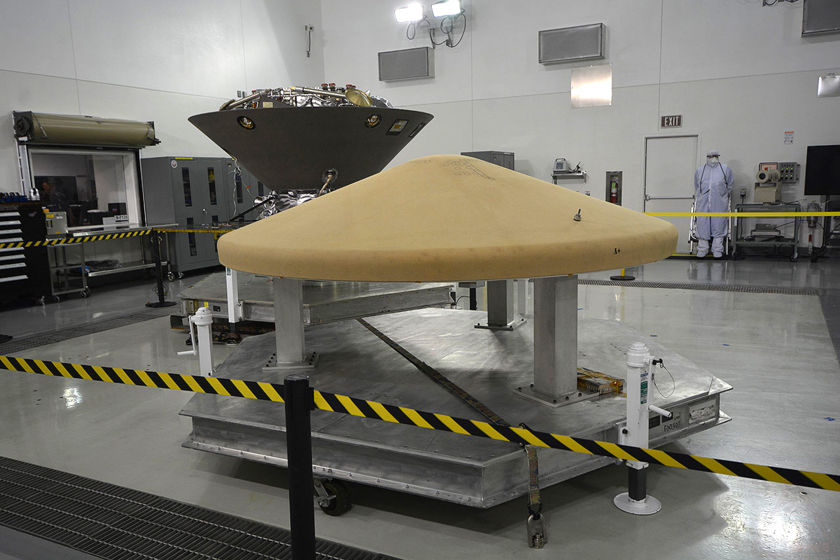 InSight and its heat shield

The heat shield will cap the spacecraft and then the whole assembly will be encased in a rocket fairing. Photo taken on April 6, 2018.

That cruise hardware will be controlled from inside the protective cocoon of the aeroshell by the lander brain. InSight will molt its spaceflight skin on the way to landing, metamorphosing into a surface craft. Most spacecraft complete their metamorphoses just after launch, as they hatch out of their egg-like fairings and unfurl solar panels and antennae, but landers experience a second transformation much later. They're so much more difficult than orbiters.

They've now capped the aeroshell. Human eyes have laid eyes on the InSight lander for the last time. That's another kind of transformation -- it still exists, but from now we experience it only as an imagined object, not as something we can detect with our senses. That's one reason why self-portraits of spacecraft are so thrilling -- they make imagined objects pop back into real existence, at least for the fleeting moment of a photo.

Best wishes to all involved that we'll see InSight safely on the surface of Mars in its own self-portrait in November!

Emily - Thanks for posting articles like this. It's too easy for those of us with an interest in space to get lost in the technology and to forget how amazingly, awesomely cool it is to be a human being standing next to a spacecraft that will be heading to Mars in a month. The first time that I visited the Smithsonian Air & Space Museum, I stood in line four times, just to touch the moon rock. Why? Because it was THE MOON. What could be more incredible than to look at your finger and to know that it had just touched the moon? Keep telling us about all of the great science (and I love your articles on planetary geology), but never, never stop writing about the people who make it happen and what it means on a personal level.