At last week's Lunar and Planetary Science Conference, I tried a new experiment: collaborating with other attendees to take a shared set of notes. It worked well, and I'm ready to deploy it at future conferences with more notetakers. It is especially valuable for multi-track conferences like LPSC, where there might be three different rooms I wanted to be in at the same time. There were three people besides me who contributed the lion's share of the notes: Harriet Brettle, Sierra Ferguson, and Lori Glaspie. All reported that the exercise was useful for them as it was for me. At the end of this document, you'll find links to PDFs of our collective conference session notes.

One thing I wanted to do -- but did not figure out how -- is to incorporate the notes being taken on Twitter. Many people like Patrick Donohue, Martin Hajovksy, Jörn Helbert, Patrick McGovern, Jen Newman, Julie Rathbun, Ed Rivera-Valentín, Jake Robins, Natasha Stephen, Angela Stickle, and Ryan Watkins contributed significant numbers of tweets to the #LPSC2018 hashtag. I gathered many of the tweets that were so tagged in a spreadsheet using an IFTTT applet, but sometimes the rate of tweeting overwhelmed the applet, and not everyone used the hashtag on every tweet, and I can't think of a non-laborious way to incorporate those tweets into the notes. So I'd appreciate advice or suggestions on how to do that better. Perhaps in the future I could engage some volunteers who are unable to attend the conference to watch the feeds of conference "supertweeters", assigning individual tweeps to a volunteer who would copy and paste their notes into the notes documents once a day.

Before I get to the notes, I want to share one other cool thing: links to full-resolution photos of James Tuttle Keane's sketches from the meeting. It's always fun to see these pop up in my Twitter feed. It's almost as fun to see the excitement of scientists when they "get Keaned"! He's named the files after the presenters, so here they are, in alphabetical order:

AND: Thanks also to Leila Qışın who also shared her notebook full of sketches! (zip, 44MB) 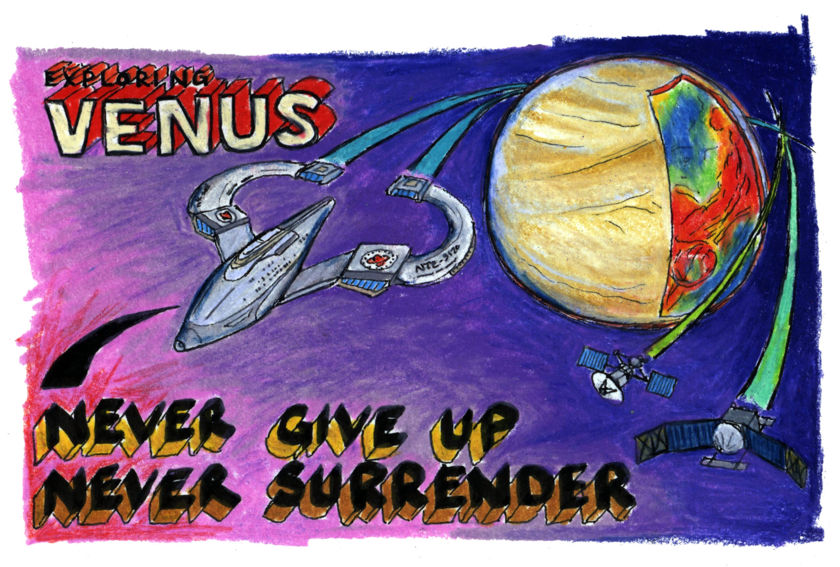 James Tuttle Keane's sketch captures the spirit of Lori Glaze and the Venus science community at the 2018 Lunar and Planetary Science Conference.

Following is the conference session program with links to notes documents. I want to thank Harriet Brettle, Sierra Ferguson, Lori Glaspie, Sarah Lamm, and Andy Rivkin for participating in my experiment. It was a small group and we didn't cover all the sessions, nor did we try to. Only sessions for which we have notes are linked below; no link means no notes. If you took notes at any of these sessions and want to contribute, send me an email! Also email me if you'd like to copy and paste from the hashtagged tweets spreadsheet or supertweeters tweet archives into notes documents!