Moon Monday: Looking back at the Moon from Apollo 17

This week, at the Lunar and Planetary Science Conference in Houston, there are special sessions devoted to the 45th anniversary of the Apollo 17 mission. Lunar sessions at LPSC are particularly special because they are almost always attended by the one and only geologist ever to walk on the Moon, Harrison "Jack" Schmitt. It's something else, I can tell you, if you're a young researcher who has delivered a talk about an Apollo sample, and then a bearded man walks up to the microphone during the question period and begins his comment with "When I picked up that sample on my EVA...."

Anyway, in honor of Jack and Apollo 17, here is a photo that (possibly) Jack took as the three astronauts in the America command module departed their most unearthly of field sites. I love perspectives on the Moon that show a face different to the one we see from Earth. Here we're looking at the eastern hemisphere; the elliptical dark feature near the top is Mare Crisium. Toward the bottom, you can see the dark shade and cluster of filled craters that marks the south pole - Aitken basin. 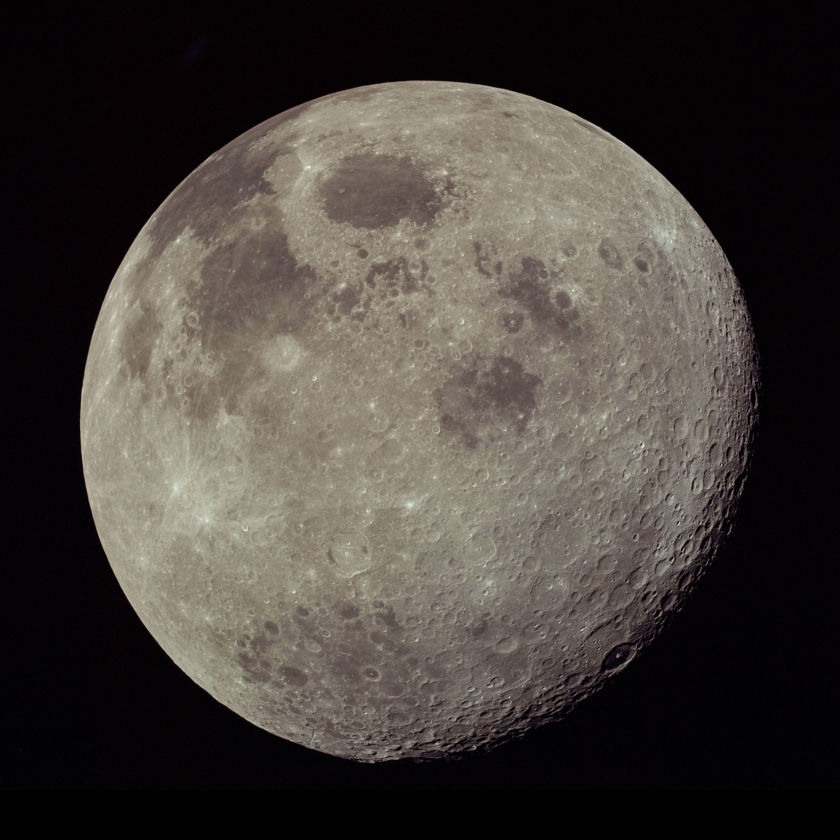 Apollo astronauts were treated to a glorious view of the Moon's eastern hemisphere as they flew home. Processed from a scan from Johnson Space Center's Project Apollo Archive.

Jason Davis dug out some text about this phase of the mission from the Apollo Lunar Surface Journal:

The TEI (Trans Earth Injection) burn was done over the Farside about eight hours after wake-up. During their final hours in lunar orbit, all three of the astronauts passed along miscellaneous geology observations, but the burn was the main event and, when they emerged from behind the Moon for the last time, Gene was able to report a nearly perfect, 1/2 g burn. "America has found some fair winds and following seas," he said, "and we're on our way home." Indeed, once Houston got enough tracking data, they found that the velocity error was so small that the midcourse correction would only have to be 0.3 fps (10 cm/s) and there was talk of deleting the burn.

After the burn, America climbed rapidly away from the Moon and, indeed, the increased altitude meant that AOS came more than 13 minutes early than it would have without the burn. The climb out from the Moon also gave the crew some new perspectives and they shared the view with Houston, especially a spectacular TV tour of the crater Tsiolkovsky. By the time the landing site came into view, they were 2000 miles out and they were beginning to lose detail. Jack said that he could see the landslide area at the base of the South Massif but, soon, even he had to give up. Before long, they settled into the routine of the flight home and, as Jack told Houston, there really wasn't much to do.

You can see more of these departing shots at the Project Apollo Archive. All I had to do was adjust levels on each channel to make space black, and then I brightened the levels overall. After that it seemed a little yellow to me so I brightened the blue channel a tad. I usually shrink Project Apollo scans by half before posting them -- as is appropriate for a digital archive, they scanned them at a higher resolution than the film actually supports.

Here's the original image at upper left, and a glimpse at how I adjust the levels individually for red, green, and blue channels to make space black and Moon gray. pic.twitter.com/NVflk7tJE7

You have brought the archive image to life and the moon looks all the more mysterious. Thanks for sharing this with us. Visit Us