It's getting real. Lockheed Martin delivered NASA's InSight Mars lander to its launch site, Vandenberg Air Force Base in California, on February 28. Launch of the seismology mission is now less than two months away, on May 5.

Lock-Mart shared this photo of the spacecraft taken right after it was unboxed at Vandenberg. It's so cute, a little clamshell of a spacecraft. 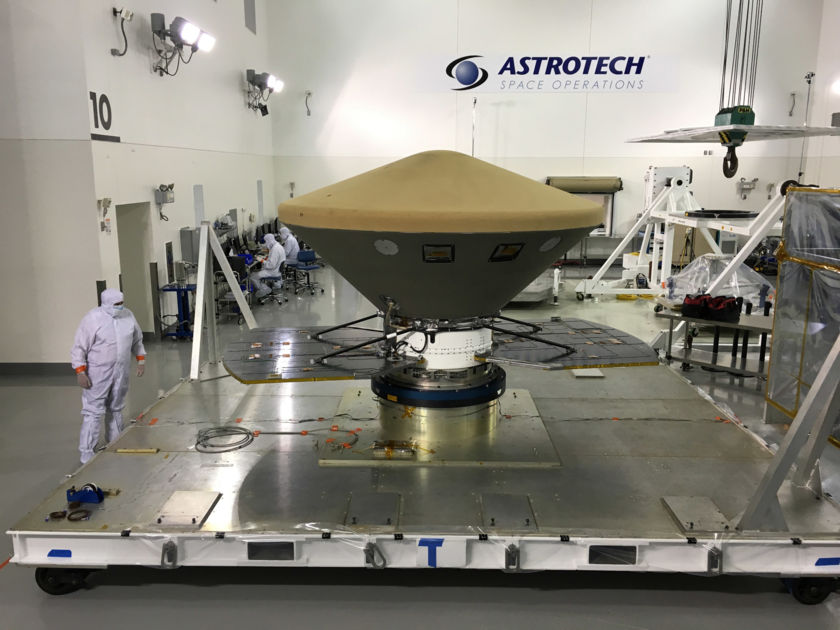 NASA's InSight spacecraft at Vandenberg Air Force Base on March 1, 2018, undergoing final processing in preparation for a May launch.

It took me a few minutes to figure out what the flat plates were, underneath the spacecraft, connected to the white ring. I realized that it is the cruise stage, a piece of hardware that turns the Mars lander into an interplanetary vehicle. It has solar panels (you're seeing their undersides in this picture), radio antennas, thrusters, and presumably some kind of navigational sensors (star scanners). Here's a top view: 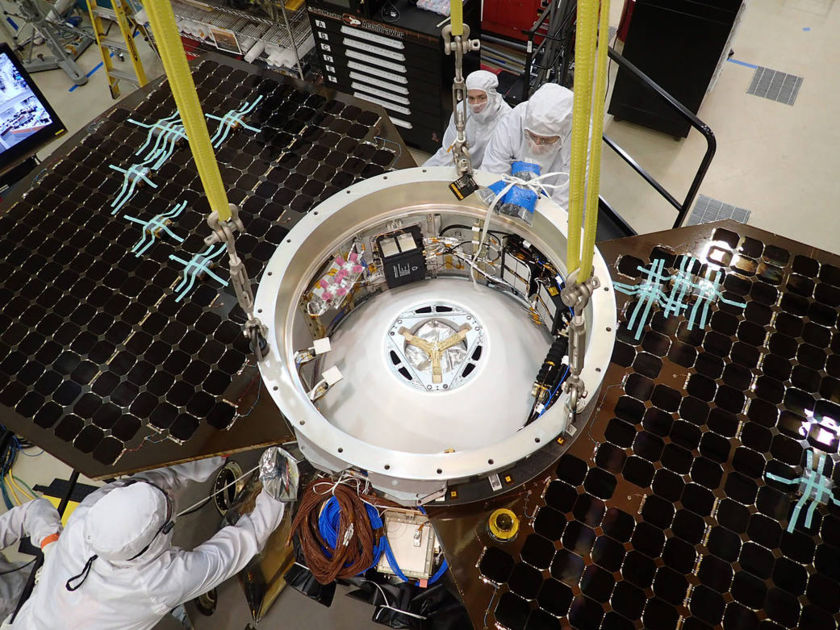 InSight stacked with its cruise stage

This photo shows the upper side of the cruise stage of NASA's InSight spacecraft as specialists at Lockheed Martin Space Systems, Denver, attach it to the spacecraft's back shell. The photo was taken on April 29, 2015.

I didn't immediately recognize it as the cruise stage because it's so much smaller than Curiosity's cruise stage. Curiosity needed bigger solar panels, but more importantly, needed a big ring of radiators and lots of plumbing behind them to get rid of waste heat from the RTG that would otherwise be really hazardous to the rover and its rocket-fueled descent backpack that was sealed up inside the capsule.

I'll post more about InSight once the mission releases the always-informative launch press kit. But in the meantime, you can put launch day on your calendars. Launch will happen super early in the morning. If it happens on May 5, the launch window opens at 4:05 a.m. PDT (11:05 UT). Since I'm local, I could go attend the launch in person. But Vandenberg launches are notoriously foggy, and cell coverage is minimal, so I'm leaning toward watching the launch from the comfort and relative Internet accessibility of my couch.

Why are they launching from Vandenberg? I thought that was just for earth-orbiting polar missions.

Hi ToSeek, I'm not sure but looking at the launch schedule, April 30th, they may be going through post launch clean up from a Falcon 9 comsat launch for Luxembourg.

@ToSeek: "Why are they launching from Vandenberg? I thought that was just for earth-orbiting polar missions." Two things: the venerable Delta II launch vehicle, which launched similar sized missions to Mars in the past, is being retired. With no Delta II available, NASA was forced to use the much more expensive and powerful Atlas V to launch InSight. Now...there are only so many resources to go around at the nation's launch ranges, things like radar tracking, range safety personnel, radio frequencies and so on. These days, the Western Range at Vandenberg is not a busy as the Eastern Range in Florida. NASA JPL was able to save some money and extend the available launch window time, by just going from the Western Range. For many missions, it's necessary to tap the free energy of the angular momentum from the earth's rotation, by flying east out of the Eastern Range, but the Atlas V is so over-powered for the small InSight spacecraft, that it just doesn't matter. This is historic, for the first time in history, a spacecraft bound for Mars will blast off from the California coast, fly south over the Pacific, around under the planet, then when over Antarctica the mighty Centaur upperstage will boost InSight into its Hohmann Transfer to Mars. Pretty cool to go back to the future. In the early 1950s it was assumed that all Lunar and Planetary missions would depart from "the" space station in polar orbit. Google: Man On The Moon, Oct. 18 1952 Colliers magazine.

Thanks for the explanation.