Last week, on February 16, the Mars Exploration Rover Opportunity celebrated its 5000th sol on Mars. Pretty good for a rover with a 90-sol warranty. Mission teams often mark sol milestones on Earth, but the activities on Mars usually aren't any different on such a day. But for sol 5000, Opportunity did something special: it took a self-portrait.

Edit: The image has now been updated, with a lower tier added that includes the wheels. 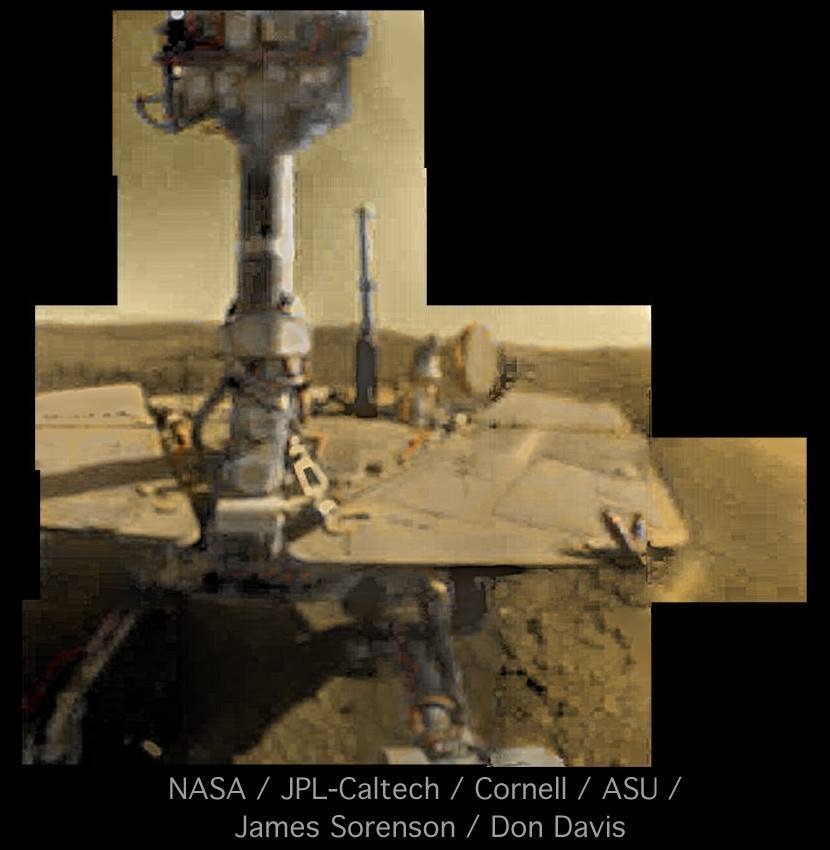 On sol 5000 of its 90-day mission, Opportunity used its Microscopic Imager (MI) to capture a view of itself on Mars. The MI is designed to view targets very close to the lens and has no focus capability, so its images of the rover are out of focus. It took 17 MI frames to cover the rover. This mosaic has been artificially colorized using a Mars-appropriate color palette.

Like Curiosity, Opportunity has a camera on the end of its arm, intended for close examination of rocks. You can see it in this Navcam photo, the reverse perspective of the self-portrait. 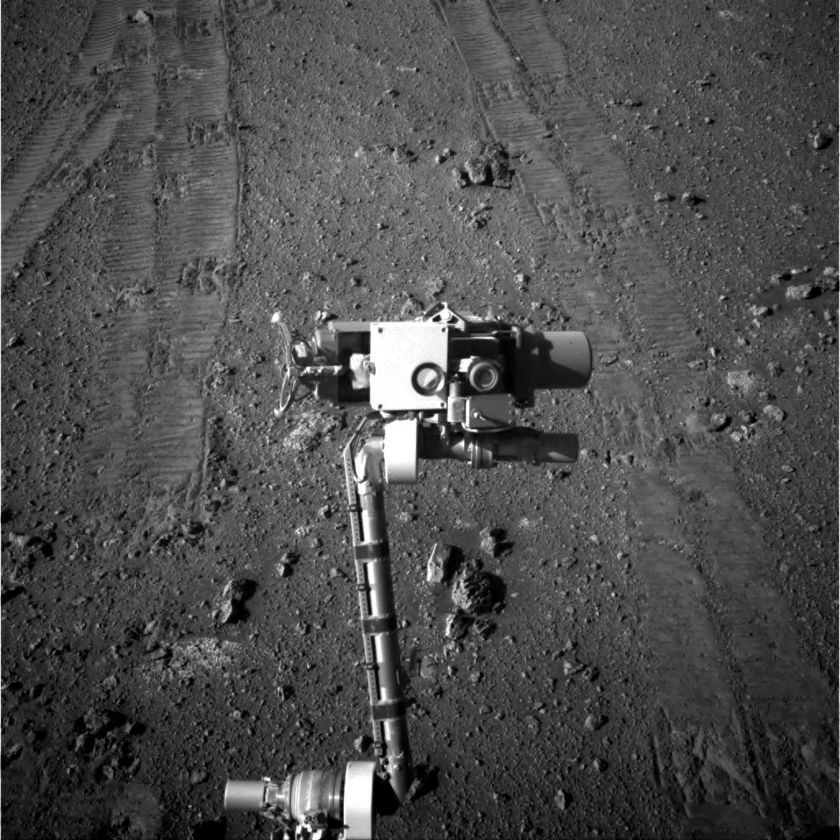 Unlike Curiosity's arm-mounted MAHLI, Opportunity's arm-mounted Microscopic Imager has no focus capability. It returns great pictures when held really close to rocks, but it's nearsighted; objects at any distance beyond 6 centimeters away are blurry. (I can relate; this is pretty similar to my uncorrected vision.) But even with all that blur, there's plenty of detail visible in the resulting images to recognize our trusty rover, sitting on Mars, especially after a couple of image processing artists (James Sorenson and Don Davis) apply their mosaicking and coloring skills to it. I love the photo. I'll have more information about the self-portrait's creation in a future guest blog post from Doug Ellison, who was involved in planning the activity.

In the meantime, I thought I'd mention that it's not the first Mars Exploration Rover Microscopic Imager self-portrait; it's just the first that includes the entire rover. Spirit took the self-portrait below, of its wheels and underbelly, after it got stuck at Troy.

Spirit took this panorama of images on its Sol 1925 (2 June 2009) to help its ground team assess its current state and plan its extraction from the soft soil known as Ulysses in the region called Troy. The rover took the images by reaching underneath it and snapping pictures with it microscopic imager mounted on the end of its robotic arm. The camera had no focus mechanism and had a very flat depth of field, so was in focus only on targets located about 6 centimeters in front of its optics. As a result, the images in this mosaic are out of focus. It was still very useful for the engineers and scientists. The mosaic, which is rotated to show the true orientation of the rover relative to the local terrain, shows the underside of the rover, the depth to which the wheels are embedded, and a pointy rock on which Spirit's belly may be resting.