Last week I wrote about India's first lunar lander, launching in March. This week, I have another story about a future Asian lunar mission: the Korea Pathfinder Lunar Orbiter (KPLO), being developed by the Korea Aerospace Research Institute (KARI) of South Korea. It has long been slated for launch in December 2018, but now has a revised launch date of December 2020.* It will be Korea's first spacecraft beyond Earth orbit. Like India and China, Korea plans an ambitious line of lunar missions to steadily ramp up capability in deep space. 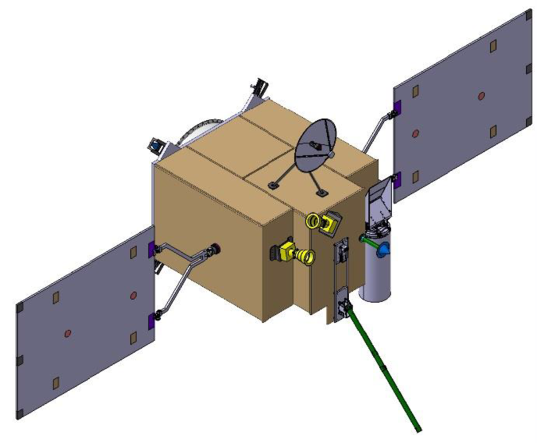 CAD model of the South Korean lunar orbiter, planned for launch in December 2020.

This blog post is based largely upon the slides from a presentation (PDF) made by KARI principal researcher Gwanghyeok Ju to NASA's Lunar Exploration Analysis Group meeting in October, which I hope I have interpreted correctly. Additional information is from NASA and ASU. Any errors are, of course mine.

KPLO is a small (550-kilogram) spacecraft. It will be mostly Korean-built with some technical support from NASA, particularly in the areas of telecommunications, navigation, and mission design. After launch on a commercial launch vehicle, it will take a month to reach the Moon (using a "phasing loop transfer" trajectory involving three and a half orbits of Earth, pumping the altitude up toward lunar orbit insertion) and will have a nominal mission lasting one year. Propulsion will be from four 30-newton thrusters and four 5-newton attitude control thrusters. Once at the Moon, its orbit will be polar and nearly circular with an altitude of about 100 kilometers. 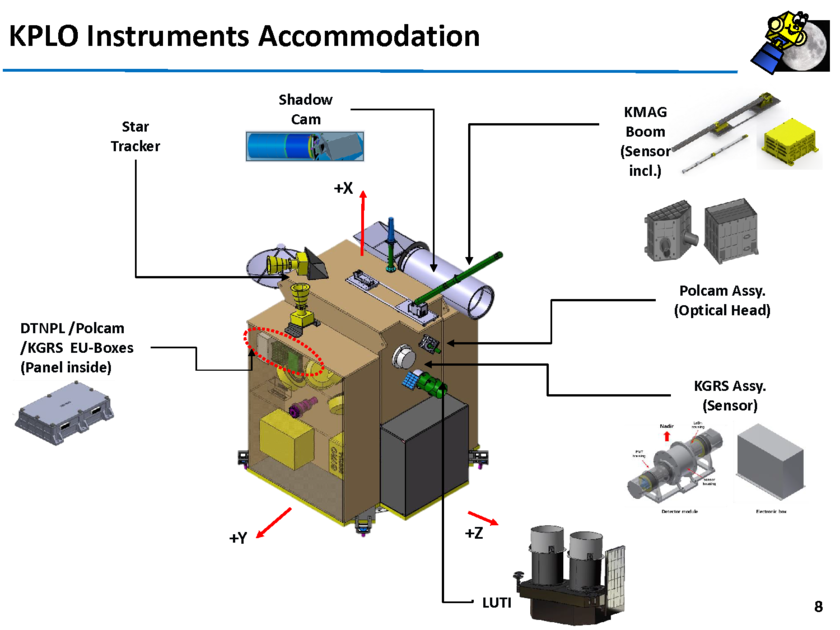 Slide 8 from a presentation by Gwanghyeok Ju to the Lunar Exploration Analysis Group, October 10, 2017.

For KPLO, Korea is developing a package of 4 science instruments totaling about 25 kilograms:

In addition, NASA's Advanced Exploration Systems Division (which is part of the human spaceflight side of NASA, not the science side) is providing one instrument:

The mission is also focused on developing some enabling technologies, like disruption-tolerant networking. KPLO will be launched on a commercial space launch vehicle, but no contract has been signed yet. (When I began the research for this article, I thought it was launching in a year; now that the launch has been delayed to 2020, it makes a lot more sense that the rocket hasn't been bought yet.)

One of the challenging hurdles in front of an organization graduating from operating in near-Earth to deep space is telecommunication. KARI will update an existing satellite communication center to be compatible with NASA's Deep Space Network (DSN). KARI is also working with NASA to prepare to archive their data to standards compatible with NASA's Planetary Data System and ESA's Planetary Science Archive. There wouldn't be any reason to do that unless they planned on sharing their data with the world, so that's welcome news.

Following a hopefully-successful KPLO, South Korea has plans for several future missions. A second Chandrayaan-2-like mission could have an orbiter, lander, and rover, but it seems the details are still up in the air. The second mission would nominally be launched on Korea's own rocket, the KSLV-II. A major goal of a second mission would be to demonstrate a domestically-produced upper stage for the KSLV-II, so the launch date for a second lunar mission is tied to that development effort.

Here is Gwanhyeok Ju presenting the Korean lunar program and KPLO to the NASA Exploration Science Forum in July. It opens with the acknowledgment of the recent impeachment of South Korean president Park Geun-Hye. Since KPLO was initiated under her watch, it apparently was not obvious that it would continue after the impeachment, but Ju confirmed that the mission was going forward, albeit with a delayed launch date. (I don't think the launch delay is connected with the political turmoil in any way.)

*The December 2020 launch date was confirmed to me by NASA's John Guidi, but Ju mentions in the above July presentation that they were negotiating the delay at that time.