#DPS17: The Moon's Giordano Bruno crater through many eyes

The Division for Planetary Sciences meeting has been over for a week and I'm still processing my notes. Today's story is about a presentation by Sriram Bhiravarasu on some interesting minerals mapped around a fresh crater on the Moon. Like the other talks from DPS that I've been writing up, it's not an Earth-shattering result, just an illustration of the kinds of processes by which scientific research inches forward. I liked this paper because of how international it was -- the talk featured data from India's Chandrayaan-1, Japan's Kaguya, images and spectra from NASA's Lunar Reconnaissance Orbiter, and radar data from orbiters and Arecibo.

In fact, the presenter is a postdoc at Arecibo, and is currently displaced from there by loss of power and water to his home thanks to hurricane Maria. So I also wanted to highlight his talk because I cannot imagine being a young researcher trying to establish my cred and having a historically awful hurricane devastate the community in which I was working. In general, I was stunned by how many Arecibo workers were at DPS and able to talk science despite what has been a traumatic couple of months for them all. If you are reading this and feel like supporting local recovery efforts, I suggest Antonio Paris' gofundme for his delivery of supplies to his home state of Utuado, and the USRA's gofundme to help Arecibo staff. Arecibo has been a major center for relief for the local area -- they've been supplying drinking water and generator power and a helicopter landing pad for relief flights, among other things.

Anyway, back to the Moon. This is the Moon. You may recognize it. But you don't usually see it from this perspective; you would have to be an astronaut to see it from this point of view. Near the top of the picture is a very pretty rayed crater named Giordano Bruno. Rays generally mean a relatively youthful crater. Over time, micrometeoroid impacts and other space weathering processes make the rays fade. 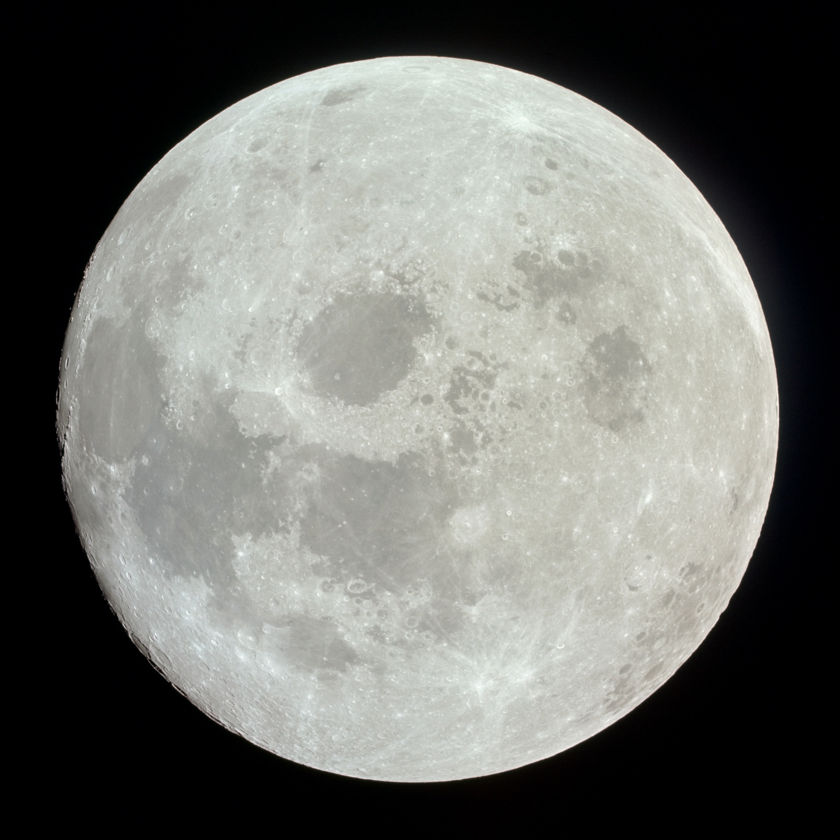 One of the Apollo 11 astronauts took this photo of an almost fully illuminated Moon on July 21, 1969, during their journey home. The command module was nearly 20,000 kilometers away from the Moon at the time. The egg-shaped dark area above center is Mare Crisium. The rayed crater Giordano Bruno is near the top of the frame. Near the bottom are two small rayed craters that bracket a larger crater, Stevinus. High-sun images like this one emphasize albedo differences (like crater rays and mare basins) over topography (like crater bowls).

Another way to make crater rays fade is to look at the crater under oblique illumination. It's very hard to see the rays unless they're lit from nearly straight overhead.

At the exact center of this photo is an unassuming crater with a fairly crisp rim and rumpled floor named Giordano Bruno. Thanks to oblique illumination, it's nearly impossible to see the extensive ray system that surrounds the crater.

I still find it wonderful that some of the best photos of the Moon are from the Apollo and Lunar Orbiter missions. Later missions have had fantastic cameras, but just like Viking at Mars, it's better to dig deeper into history for the prettiest wide-angle views.

Bhiravarasu's work involves looking at one feature through the lens of many different data sets. He picked Bruno because it's a very young crater (1 to 10 million years old, according to some published estimates) and therefore it's still fresh, meaning you can still see the mineralogy exposed at the surface. It lights up very prettily in Moon Mineralogy Mapper (M3, pronounced "M-cubed") data captured by the Chandrayaan-1 spacecraft: 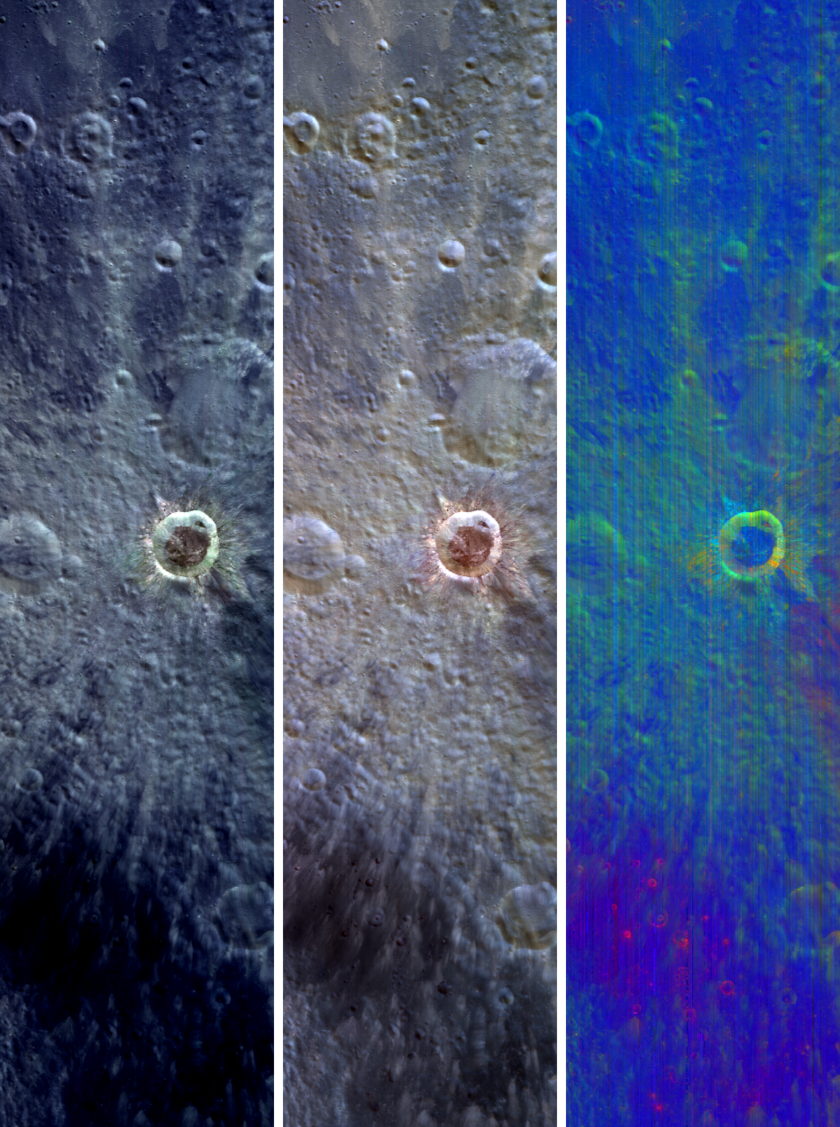 Don't sweat it if you don't understand the caption. The point is that M3 sees the lunar surface in detail in infrared wavelengths where it's possible to diagnose the presence of certain minerals. In particular, Bhiravarasu notices hydration features in the inner flank of the crater wall and also in the ejecta blanket. "Hydration features" doesn't mean there is water or ice present, it means there are minerals that incorporate water into their crystal structure.

For the Moon, it's a relatively new thing to notice hydration features in rocks; in fact, it's M3 data that yielded the discovery of widespread hydrated minerals in 2009. In that paper by Carle Pieters and coauthors, they proposed that "the formation and retention of hydroxyl and water are ongoing surficial processes. Hydroxyl/water production processes may feed polar cold traps and make the lunar regolith a candidate source of volatiles for human exploration."

Bhiravarasu comes to a different conclusion regarding the hydration features. Here are two of his slides incorporating data from Diviner (an infrared spectrometer on Lunar Reconnaissance Orbiter) and Mini-RF (a radar mapper from either that mission or Chandrayaan-1). Again, my point here is not to explain the details of his work, but rather to demonstrate how we can come to deeper understanding of places in space when we can take advantage of multiple overlapping data sets. 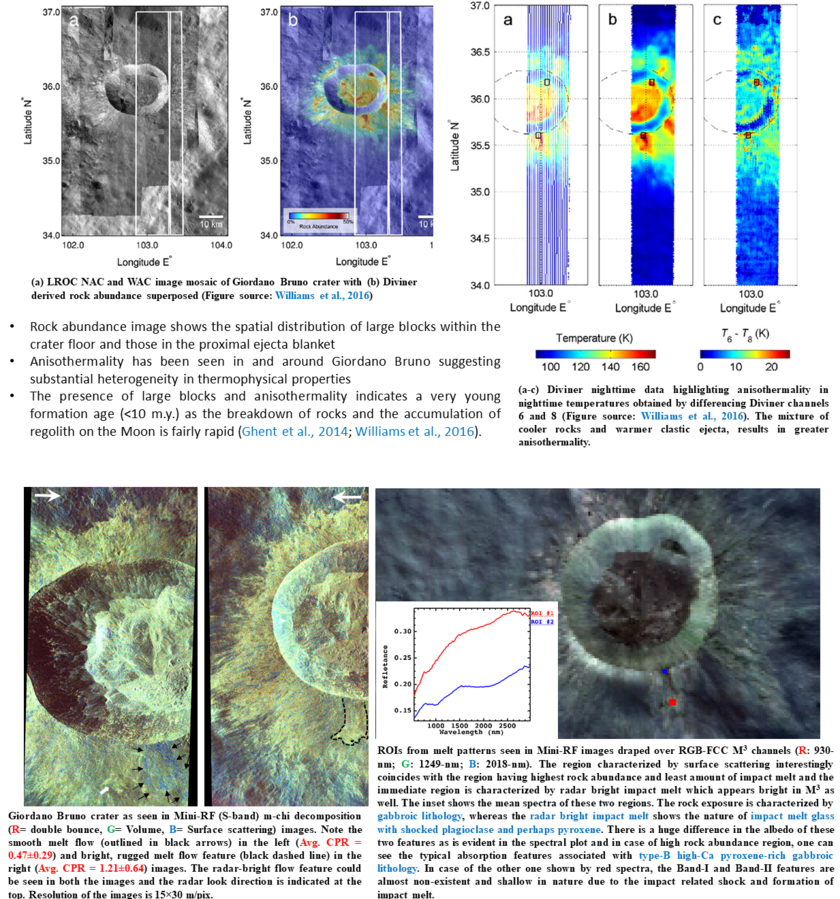 Bhiravarasu observes that places where you can see hydration features are related to impact melt, and suggests that the water in the rocks may have come from the impactor -- that it could be a comet that made Giordano Bruno and its spectacular rays. A comet would've come in with much higher speed than an asteroid, leaving behind a spectacular ray system and a little gift of water at the impact site.