As expected, OSIRIS-REx's Earth flyby on September 22 was a success. The spacecraft coasted past Antarctica at 16:52 UT, using Earth's gravity to bend the spacecraft's trajectory onto a course toward Bennu's tilted orbit. It hit its target within 6 kilometers and 1 second, principal investigator Dante Lauretta says. The next time OSIRIS-REx returns to Earth, on September 24, 2023, it will be carrying samples of asteroid material. 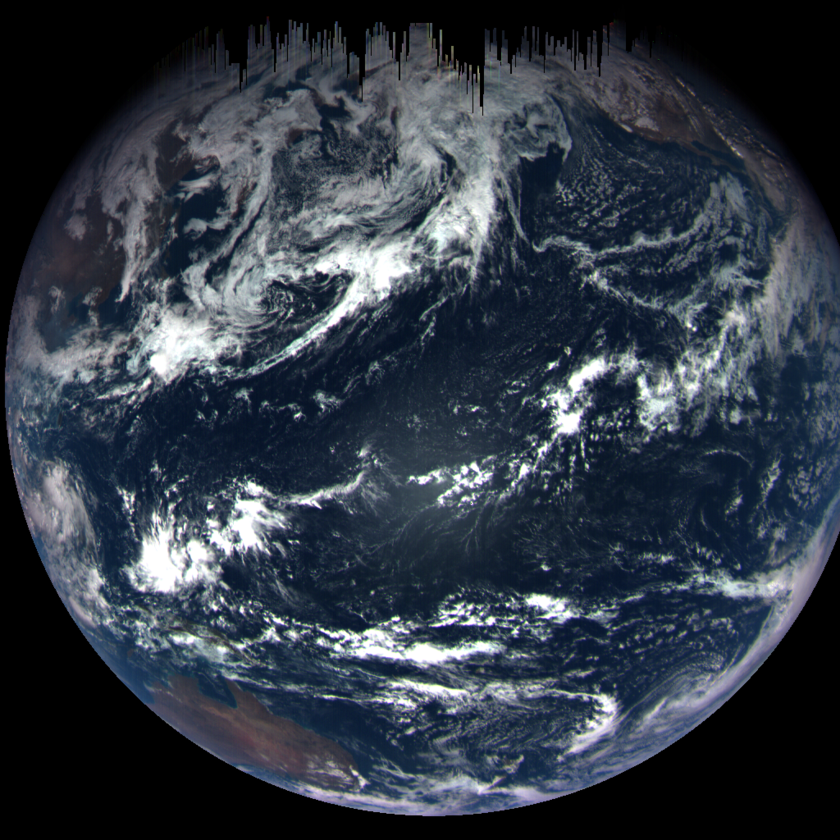 OSIRIS-REx flew past Earth on September 22, 2017 and took this photo shortly after. The Pacific Ocean covers nearly the entire visible globe. The Sun is nearly behind the spacecraft, and a bright area on the ocean near the center of the view is specular reflection from the watery surface. The image is a composite of three photos taken through infrared, green, and blue filters. The infrared filter causes land that would appear green to appear red. "Icicles" at the top are caused by detector read-out register bleed-through, which occurs at the very short exposure times required for a close-up view of a bright planet.

Most of OSIRIS-REx's science instruments turned on after the flyby in order to train themselves on the receding Earth-Moon system. The observation sequences were very similar to what the spacecraft will do during proximity ops at Bennu. The main difference was camera exposure time: Bennu has a very low albedo, so exposure times for brighter Earth had to be set very short. In addition to instrument checkout, the flyby also gave the team operational practice. They are geographically distributed in multiple locations, so this was the first time to see how everything flowed together. Everything flowed great, and the result is some lovely images of our home worlds. 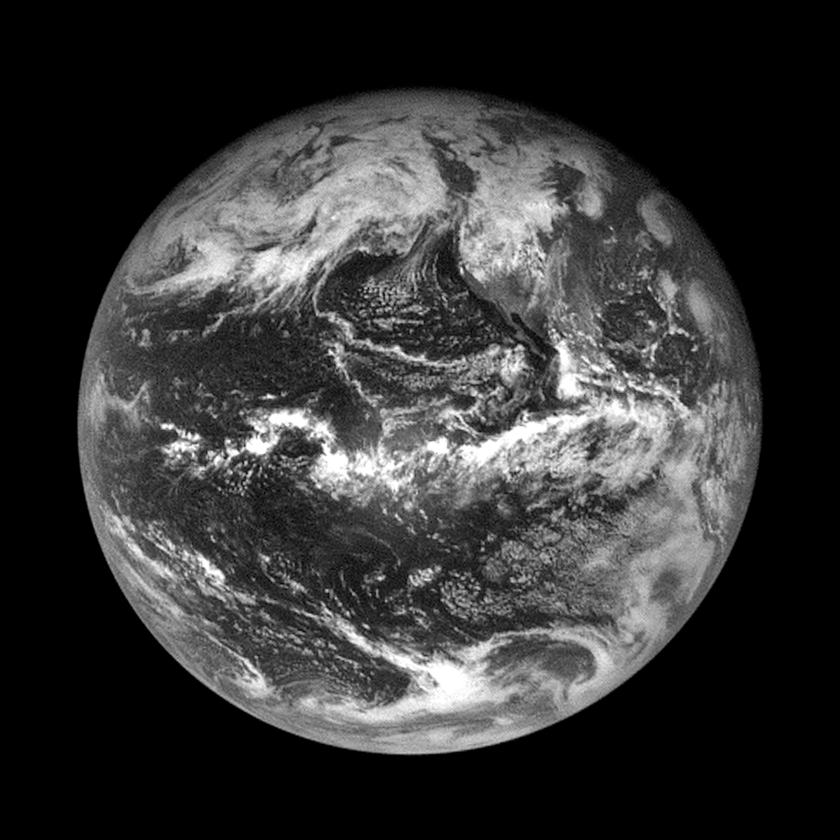 This image was taken from a range of 110,000 kilometers, following the September 22, 2017 Earth Gravity Assist flyby. It was captured by NavCam 1, a wide-angle black-and-white imager that is one of three cameras comprising TAGCAMS (the Touch-and-Go Camera System), which is part of OSIRIS-REx’s guidance, navigation, and control system. NavCam images will track starfields and landmarks on Bennu to determine the spacecraft position during mission operations. It has been cropped and rotated so that Earth’s north pole is located at the top. The Baja Peninsula is visible above and to the right of center. Cloud cover and the Pacific Ocean dominate most of the image, but Hurricane Maria and the remnants of Hurricane Jose can be seen in the far upper-right portion of the image, off the east coast of the United States.

Deputy principal investigator Heather Enos said all data was received as expected. It's not at all uncommon for at least one instrument to go into safe mode during early operational activities like Earth flybys, so OSIRIS-REx's success bodes well for the robustness of the mission. Other early data, from OSIRIS-REX's hunt for Trojan asteroids accompanying Earth in its orbit, revealed that the performance of its highest-resolution PolyCam was better than expected. The better performance means they can begin attempting to spot Bennu as early as July, although they may not spot it until August. 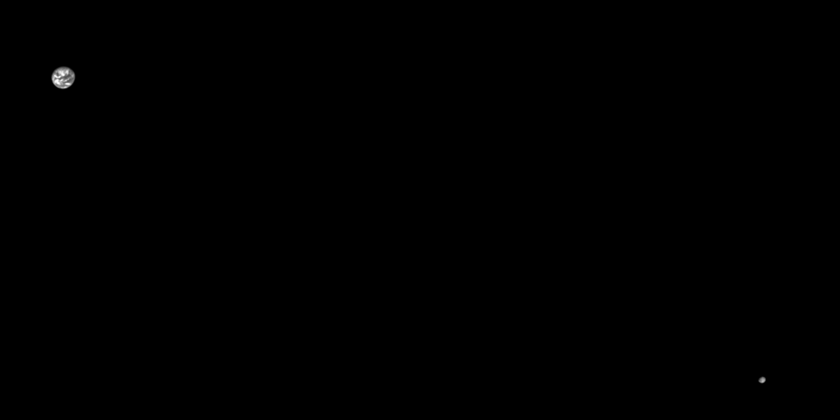 Expect more Earth flyby images to be released every dew days. Sadly, the mission has no plans to release raw image data as past missions have done. However, Enos said they do plan on relatively rapid data release to the Planetary Data System, with quarterly deliveries of data from the period 3 to 6 months prior.

Remember what OSIRIS-REx was designed to do. It's supposed to map and then approach very closely to a very small object. Bennu's size is estimated at about 500 meters. The Moon is 7000 times larger than that, and Earth 26000 times larger. So take the distances OSIRIS-REx travels from Earth and the Moon before testing out its instruments, and divide them by 10000, and you get an idea of how Bennu might appear to OSIRIS-REx from different reasonable ranges. The four post-flyby observation periods at ranges of 100,000, a million, 3 million, and 5 million kilometers are like observing Bennu from ranges of 10, 100, 300, and 500 kilometers. (Remember this when you wonder why all of OSIRIS-REx's approach images of Bennu just look pointlike. Bennu is small.)

OSIRIS-REx has a lot of cameras. In anticipation of more pictures being released, here is a brief summary of their capabilities:

Finally, I'll share some images not taken by OSIRIS-REx, but rather, of OSIRIS-REx. Earth flybys are special in part because we get a brief chance to lay eyes on our precious deep space travelers, even if we can only see them as points of light among the stars. Here are a few such views:

Over the weekend, Jost Jahn, using the ROTAT telescope, was the 1st individual to #SpotTheSpacecraft (green circle): https://t.co/SLhDZL3Y4q pic.twitter.com/M1PPx5Famb

The 2nd individual to #SpotTheSpacecraft (circled in green) was David Rankin, who took this image from Utah: https://t.co/bR1uFyi0U0 🔭 pic.twitter.com/GIIM3pJJj8

Takaaki Oribe caught this image of yours truly from the Saji Observatory in Japan on Sept. 18: https://t.co/QhrHf1ltCg #SpotTheSpacecraft pic.twitter.com/XFCXPDPDB4

On Sept. 20, Mike Read imaged me cruising along with the Spacewatch 0.9-m telescope on Kitt Peak: https://t.co/582fJGNZKl #SpotTheSpacecraft pic.twitter.com/VFp00sRQig

Jason Davis contributed to this article.