It's a busy time for space exploration: in the span of six weeks, we've had a new planetary mission launch (OSIRIS-REx), a long-lived mission come to an end (Rosetta), and now, a mission arriving at its interplanetary destination. ESA's ExoMars will arrive at Mars on Wednesday, October 19. The landing will be happening during the joint meeting of the European Planetary Science Congress and the Division for Planetary Sciences of the American Astronomical Society, so I'll be with a lot of excited space scientists in Pasadena to watch the show. The landing happens at 07:48 PDT / 10:48 EDT / 14:48 UTC / 16:48 CEST and the ExoMars Trace Gas Orbiter is expected to complete its 134-minute orbit insertion burn at about 08:23 PDT / 11:23 EDT / 15:23 UTC / 17:23 CEST. You can watch it all via livestream at http://esa.int.

ESA released a couple of cool videos today showing the geometry of the two spacecraft's arrival. The action will begin this Sunday, October 16, at 07:42 PDT / 10:42 EDT / 14:42 UTC / 16:43 CEST, when Schiaparelli will separate from the orbiter. They'll continue on nearly parallel tracks, with the orbiter making a slight diversion burn in order to target a spot just past Mars rather than onto Mars, like the lander. On orbit insertion day, here's how things will play out, with a third spacecraft, Mars Express, flying overhead to record Schiaparelli's transmissions for later playback.

This animation shows the relative orbital paths of ESA's ExoMars Trace Gas Orbiter (TGO), the Schiaparelli Entry, descent and landing Demonstrator Module and ESA's Mars Express on 19 October 2016, when TGO and Schiaparelli arrive at Mars. At the start of the animation, TGO and Schiaparelli are shown already separated, which is set to occur at 14:42 UTC on 16 October. The animation covers the time period between approximately 12:30 UTC and 19:00 UTC on 19 October, including the expected time of Schiaparelli touch down at 14:47 UTC and the critical, 139-min TGO orbit insertion engine burn, ending at 15:34 UTC. At the end of the animation, TGO has been captured into Mars orbit and is seen starting its first bound orbit, expected to be highly elliptical varying from about 300 km to 96 000 km above the planet’s surface and taking 4 sols (1 sol is a Martian day, equal to 24 hours and 39 minutes) to complete one revolution. Mars Express is seen in its current polar orbit, from which it will have good visibility of the Schiaparelli module's descent and landing starting with atmosphere entry at 14:53 UTC. Mars Express will use its lander communication system to record signals from Schiaparelli during arrival, providing a critical record of the module's descent progress, trajectory and landing.

For fun, here's another video, the view from Mars Express.

And finally, here's the landing video.

Vizualisation of the ExoMars Schiaparelli module entering and descending through the martian atmosphere to land on Mars. Schiaparelli will enter the atmosphere at about 21,000 kilometers per hour. In less than six minutes it will use a heatshield, a parachute and thrusters to slow its descent before touching down in the Meridiani Planum region close to the equator, absorbing the final contact with a crushable structure. The animation has been sped up. For an overview of the key timings and altitudes corresponding to the events portrayed in this animation, see the Schiaparelli descent sequence graphic.

And a summary of the events to be expected during the landing. 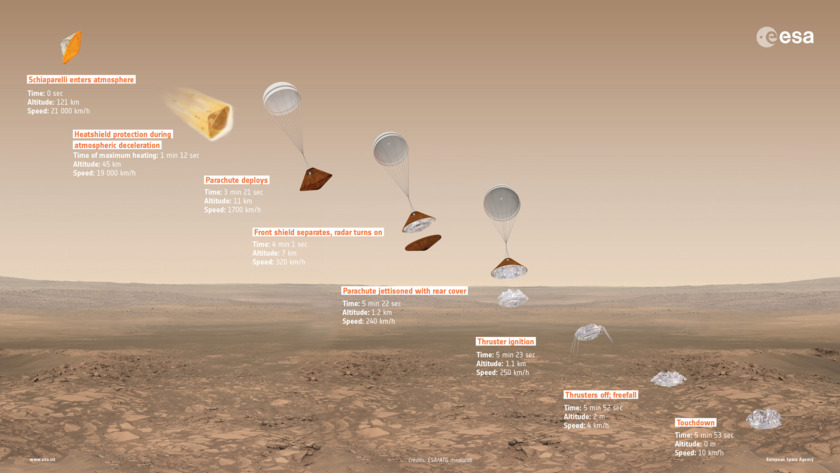 Schiaparelli is classified as an entry demonstration module, meaning that it is designed to test technologies for use in future missions. It does have a limited surface meteorology package, which doesn't include a camera. There is one camera on Schiaparelli, DECA (Descent Camera), the flight spare of the Visual Monitoring Camera that flew on Herschel. It has a wide, 60-degree field of view and will take a total of 15 images at 1.5-second intervals after the heat shield has popped off the lander, helping the team localize the landing site.

Because I see people asking this a lot: Mars Reconnaissance Orbiter will not be attempting to photograph Schiaparelli's arrival. Opportunity might, but whether it even tries depends on a lot of unpredictable factors, and it's not considered too likely to succeed, even if the single bright pixel it might possibly see happens to be above Opportunity's horizon that day. But nothing ventured, nothing gained!

Best of luck to ESA and the ExoMars team for a safe arrival next week!

It is a bit if a shock that Schiaparelli only has an EDL camera. To go all the way and land with no camera, ugh.

Yeah -- bizarre! Even an old cellphone camera woulda been worthwhile!

I thought that Schiaparelli will make atmospheric measurements on the way down, not on the surface. To get data useful for landing a "real" spacecraft on Mars (the Exomars rover in two years). I guess it is also in line with ESA's ambition to use aerobraking. Venus Express ended its mission by experimenting with that. Aerobraking has great potential, it radically reduces the need for fuel to enter Mars' orbit. It is a bit tricky since the density of the upper atmosphere of Mars varies alot with seasons, and maybe otherwise. I suppose Maven is learning about this.