December Solstice: A look at the solar system's north poles

Today is the solstice, the longest winter night at Earth's north pole, the longest day of summer in the south. To give a little light to northerners in darkness today, please enjoy this gallery of images of mostly sunlit north poles across our solar system. They were created as postcards by our own Merc Boyan as a part of The Planetary Society's Imgur "Secret Santa" package. If you'd like to print these postcards, here they are sized for 4x6 or A6 printing (zip file). To whet your appetite, here's an animated gif of all the north poles in this post.

First up, three inner solar system bodies that have been completely mapped by orbiters. We can take many, many images captured over an entire orbital mission and merge them into a photographic map. These maps are fascinating to look at and also provide the base images on which we develop our understanding of the worlds' geology. Each of them is a testament to the achievements of a mission: MESSENGER at Mercury, Magellan at Venus, and Clementine at the Moon. 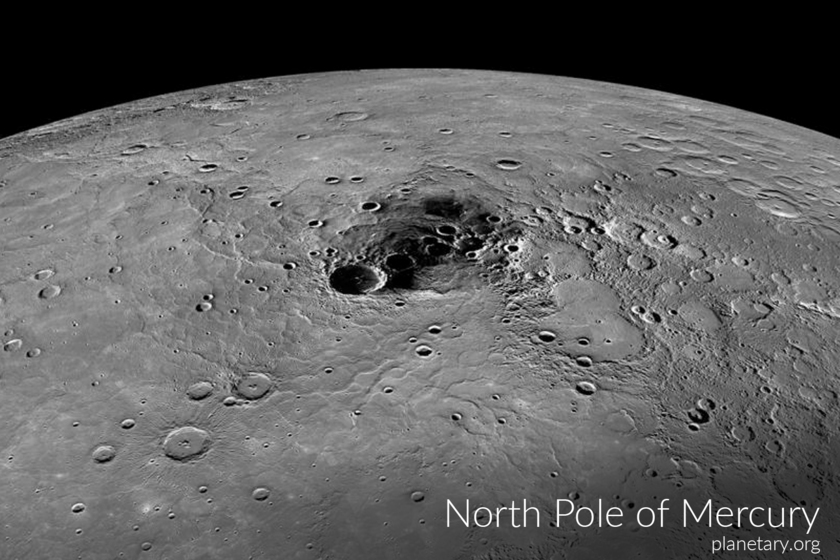 This view of Mercury's north pole is composed of thousands of individual images captured by the MESSENGER mission. In the foreground are vast lava plains first discovered by MESSENGER. At the pole are some crater floors regions that never see sunlight, where even hot Mercury can host permanent ice deposits. Learn more about this image at NASA's Planetary Photojournal. 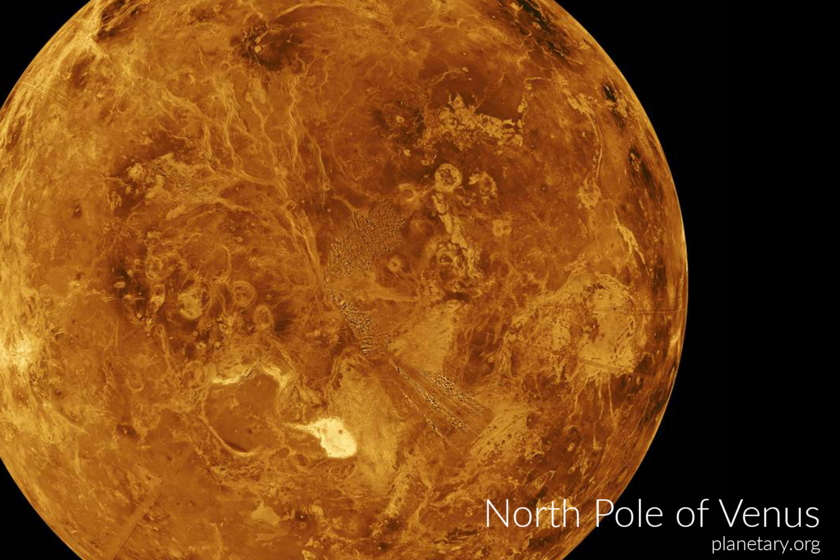 This image is composed of data captured by NASA's Magellan radar mapper between 1990 and 1994. Learn more about this image at NASA's website. 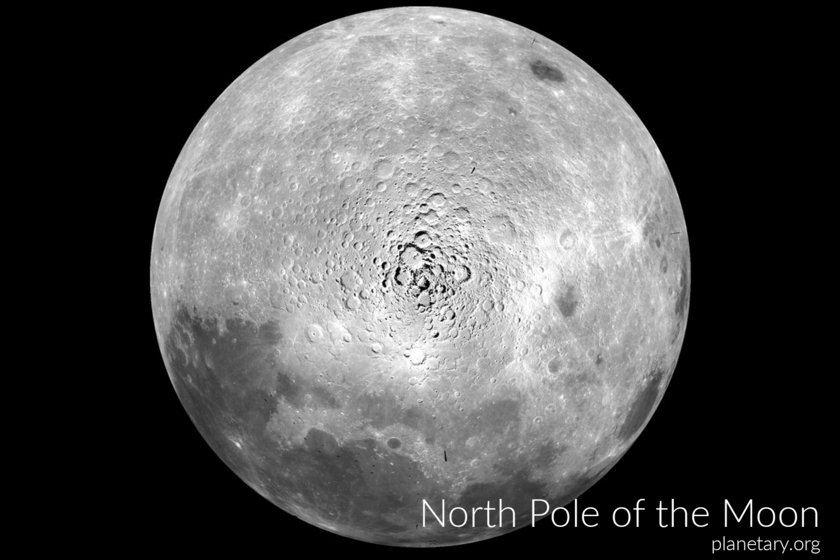 This image is based on a map of the moon developed from Clementine data. It looks odd because it's made of hundreds of individual images, all taken near the same local time of the lunar day; of course, on any given moment, roughly half of this view would be lit by the Sun and half would not. See more Clementine maps of the Moon here.

Although it doesn't show an entire hemisphere, this image of Mars' strange, swirly northern polar cap is another such testament to the long-term success of the Mars Global Surveyor mission, combining data from two instruments that revolutionized Mars science, its camera and its laser altimeter. 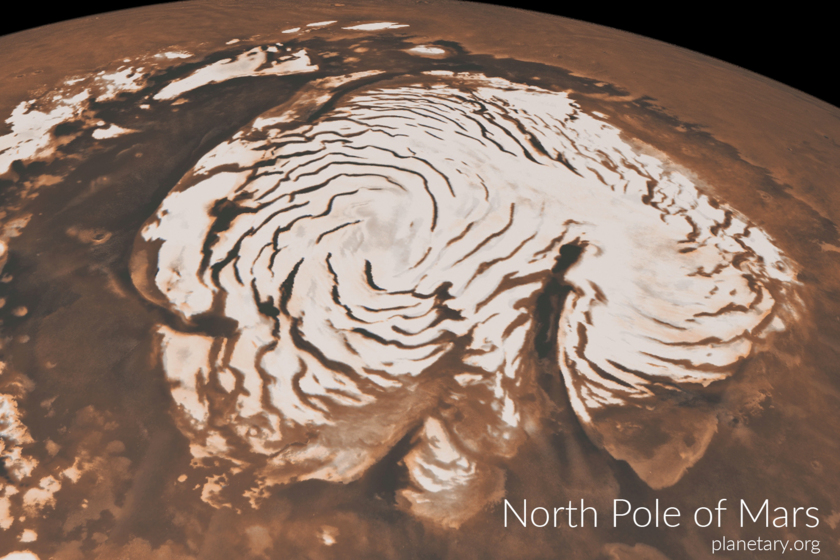 Mars' north pole has a permanent water ice cap about 1000 kilometers across. The cap has striking spiral-shaped markings, topographic depressions that are poorly lit during most seasons and may be dustier than the higher cap. Learn more about this Mars Global Surveyor view at JPL's website.

The Sun has a north pole too, but it's not as chilly as those of the planets. 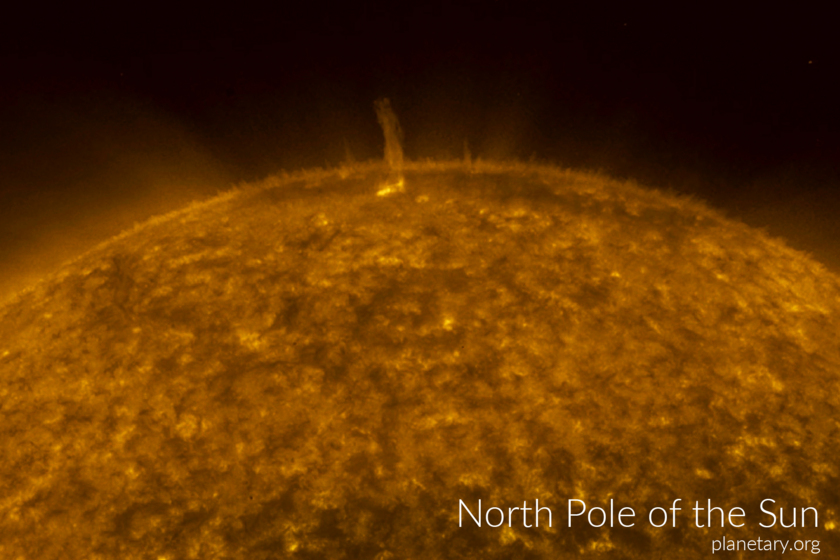 This photo is the left one in a stereo pair of solar views captured by the twin STEREO spacecraft on March 20, 2007. Visit the JPL website with your red-blue glasses to see the Sun in 3D.

In recent years, we haven't just orbited planets, we have also orbited asteroids. The Dawn mission has accomplished the amazing feat of orbiting and mapping the two most massive members of the asteroid belt. Global maps of these worlds are valuable for geology but they flatten the striking topography of these borderline planets, so it's more fun to gaze at their north poles in Dawn's striking still images. 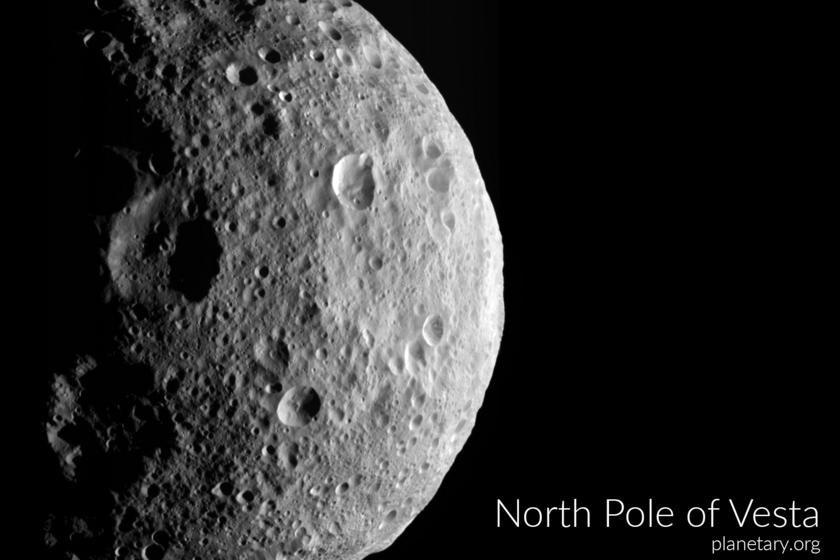 NASA's Dawn spacecraft took this photo of the northern polar regions of Vesta on August 25, 2012, as it was beginning its departure for cruise toward Ceres. Learn more about this photo in a blog entry by Marc Rayman. 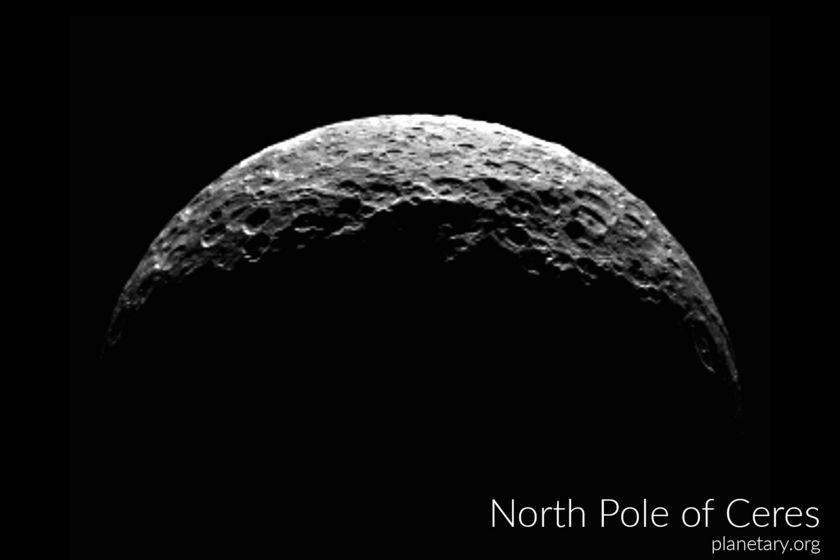 Dawn looked across Ceres' north pole from its nightside during its initial month of observations after arrival at the asteroid belt's largest denizen in 2015. It's part of a long sequence of images that show Ceres rotating; read this blog post by Emily Lakdawalla to see more of it.

Jupiter is large enough that we don't have to even leave Earth to study its meteorology and its poles. It does help to be above Earth's atmosphere, though. Ground-based astronomers get fantastic views but only Hubble can see its polar aurorae in the ultraviolet. 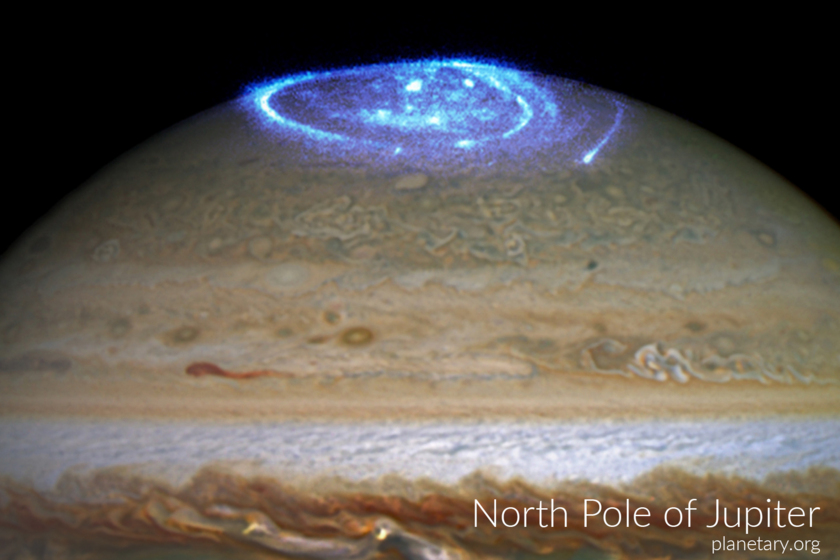 Jupiter's north pole is the site of active aurorae because of the giant planet's magnetic field. This photo combines a Hubble photo of Jupiter in visible light wavelengths with one taken in the ultraviolet to help visualize the location of the aurora. Learn more here.

Saturn can be studied from Earth, too, but it's really better viewed from an orbiter. These days Cassini is giving us frequent passes over Saturn's sunlit north pole (near its summer solstice, in fact), and views of its striking north polar hexagon. 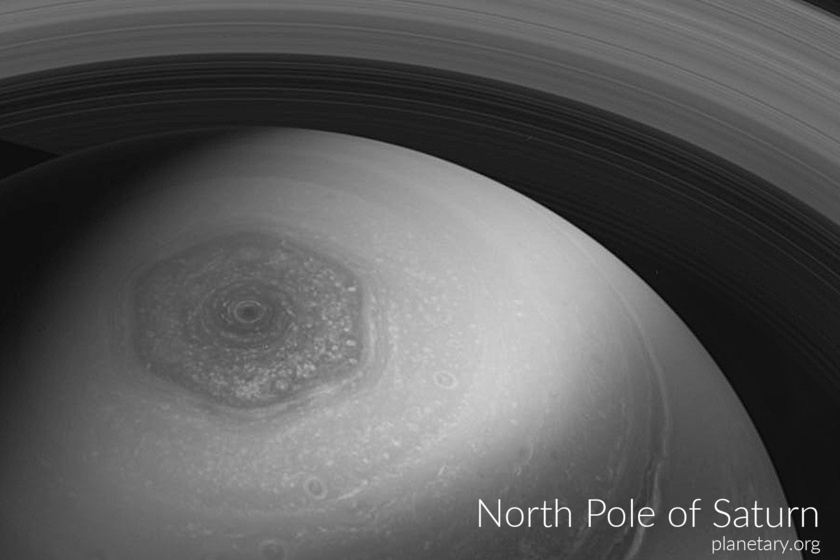 As spring has come to the north poles of the Saturn system, Cassini has been getting increasingly good views of Saturn's north pole and its odd hexagon. Read more about the hexagon here.

But for most worlds, spacecraft are necessary. Sadly, we can't always send orbiters, because they are costly in terms of money and time. Until we can send an orbiter to every world, we rely on flyby craft to give us one-time glimpses of what we're missing across the solar system. This image of Io came from one such flyby craft, New Horizons. 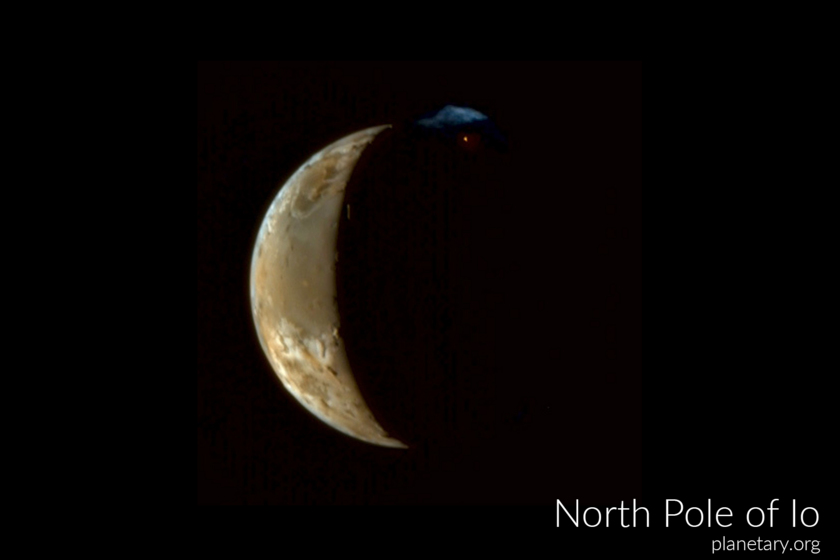 Jupiter's moon Io is the most volcanically active world in the solar system. When New Horizons flew past in 2007, its volcano Tvashtar was erupting violently, spewing ash and vapor high above Io's north pole. Here, New Horizons looked back to see the glow of Tvashtar's effusive eruptions lighting up the nighttime polar surface.

The image of Encelauds, Saturn's moon, came from Cassini. Cassini is an orbiter, but it orbits Saturn, not the moons. Consequently its best views of Saturn's moons come from flyby encounters. A few of the moons, notably Titan and Enceladus, have experienced many such flybys, but others of Saturn's moons haven't been so favored. 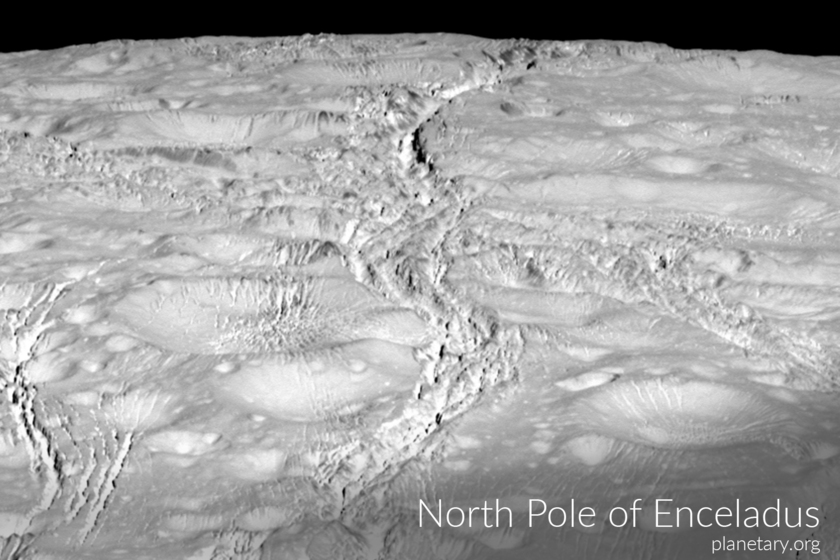 During a flyby on October 14, 2015, Cassini photographed the geographic north pole of Enceladus at high resolution. Cassini found a landscape of subdued craters crisscrossed by chasms.

And then we get to the really neglected reaches of the solar system. We have never actually seen the north poles of either Uranus or Neptune, or any of their moons, because Voyager 2 flew past them during winter in their northern hemispheres. 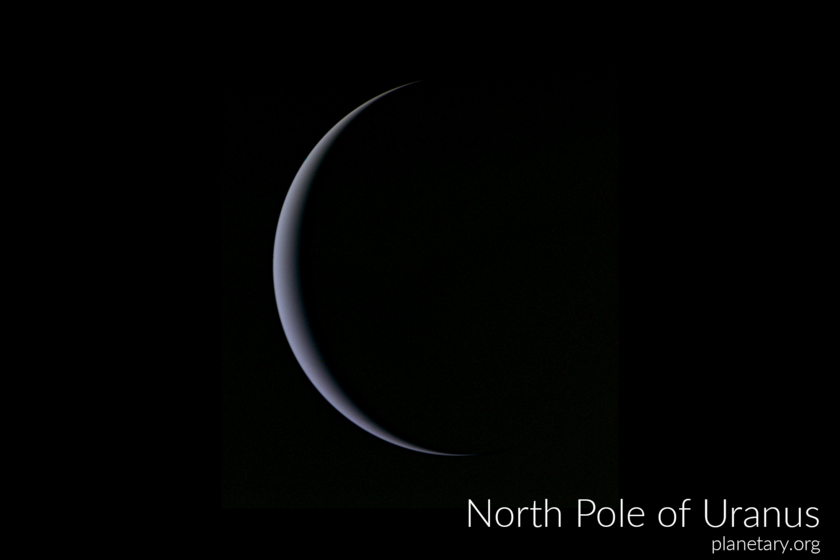 The north pole of Uranus has never been seen in sunlight by a visiting spacecraft. However, Voyager 2 was looking at the north pole as it departed the planet on February 1, 1986, and saw this crescent view. Learn more about this image in an image feature by Emily Lakdawalla. 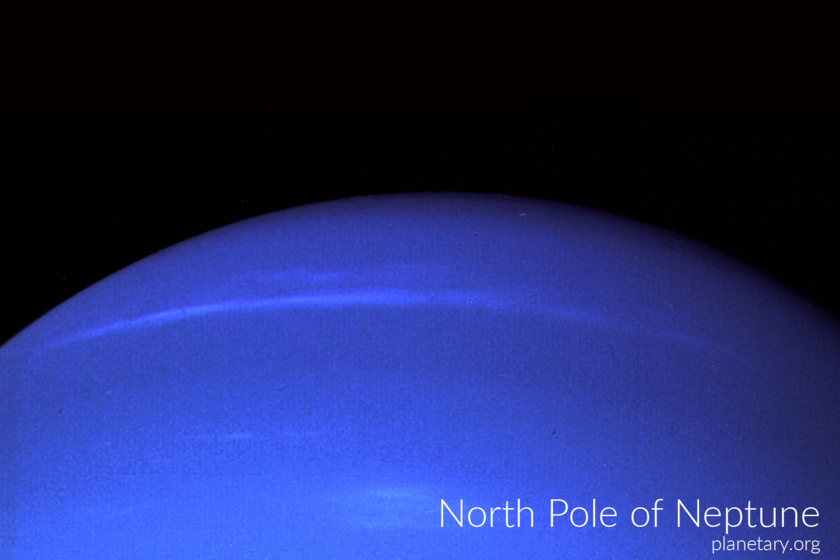 The north pole of Neptune is tilted away from view in this vintage Voyager image taken during its 1989 flyby. Learn about Neptune's seasons in this blog post by Emily Lakdawalla.

For Pluto, a newer spacecraft has given us a lot more data from a single flyby than Voyager 2 got at Uranus or Neptune. But it was still just one flyby, and it's rather heartbreaking to know this dynamic little world is out there changing and we can't see it. Maybe one day we'll be able to build spacecraft that will last a hundred years, patiently watching and returning data. 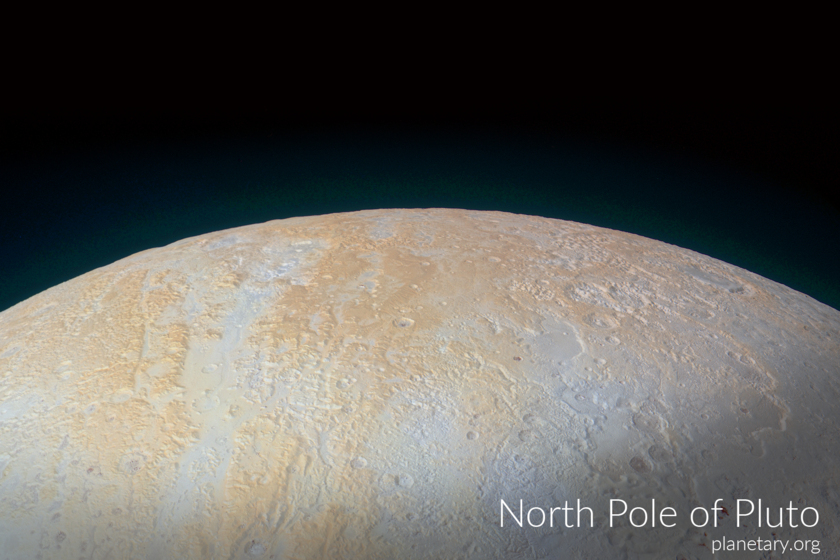 Pluto's north polar regions are reddish, as are those of its moon Charon. Scientists hypothesize that methane trapped at the pole during winter darkness gets broken apart by solar radiation with the coming of spring, and the molecular bits rejoin into larger carbon-rich molecules called tholins. Read more about the image in this blog entry by Emily Lakdawalla, and more about tholins in this blog entry by .

We explore all these worlds because they are fascinating in themselves. But we also explore them to understand our own planet better -- both its past, and its future. No matter where we go in the solar system, we are reminded how precious and unique our own world is. So I'll finish this post with a view of Earth's north pole, taken a few years ago. This year, under cover of winter darkness, Earth's polar ice should be re-forming. But it isn't. Understanding all the different forces that are acting to make this year so anomalous is a difficult challenge. The insights we gain from studying the atmospheres of Venus and Mars have already contributed to our ability to predict the future of our own world. But those insights do not teach us how to accomplish the social, cultural, and political changes we need to make in order to avoid the direst predictions. For that, we need to heed other experts. 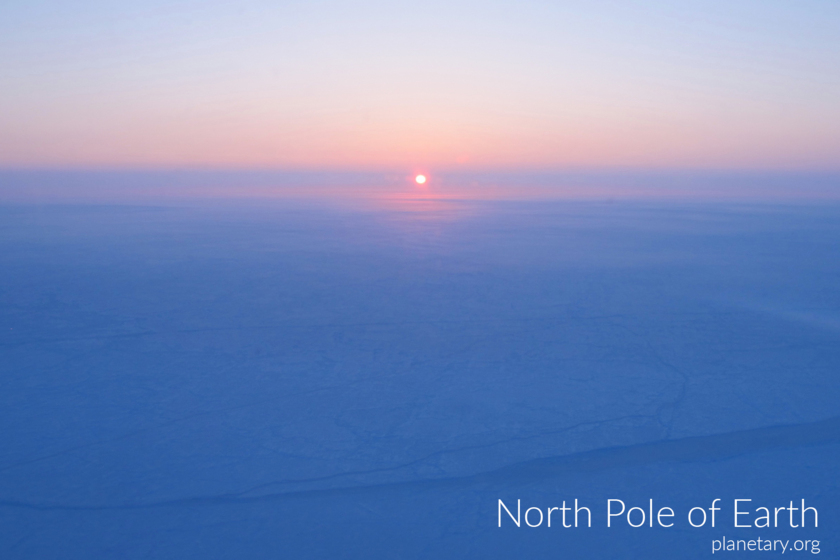 This rocks! Thank you for including Enceladus!

Are there any moons which like Earth's Moon, orbit in a plane very closely to the ecliptic, so that there are eternally lit and eternally shadowed regions on their polar crater rims and floors?