Just a day after the arrival of ExoMars Trace Gas Orbiter and its lander Schiaparelli, Mars Reconnaissance Orbiter has taken a photo of the landing site with its Context Camera, and things do not look good. ESA posted the image and an analysis on their website today. 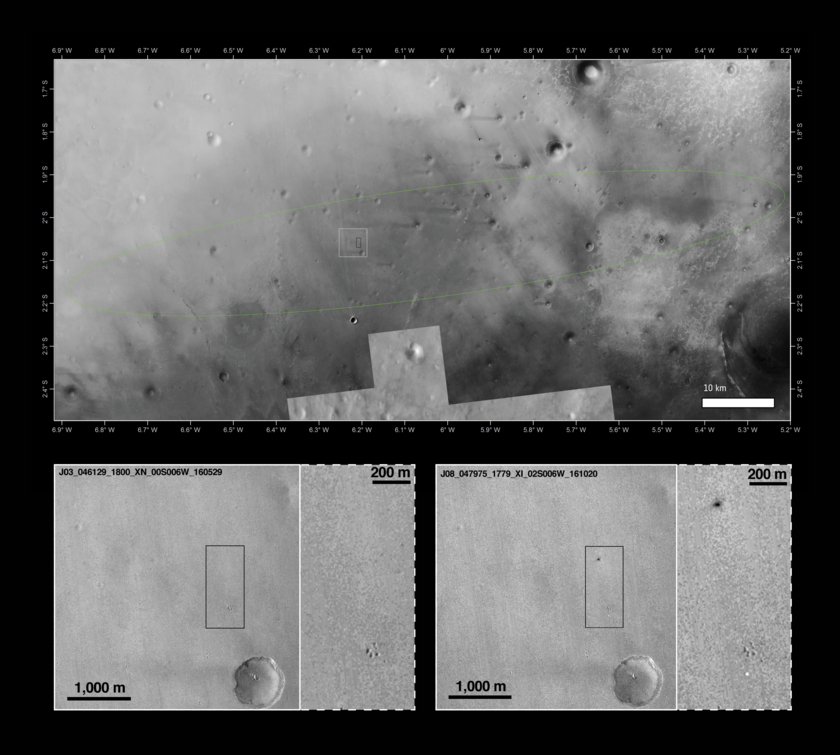 Top image: the landing site of the Schiaparelli module within the predicted landing ellipse in a mosaic of images from the Context Camera (CTX) on NASA's Mars Reconnaissance Orbiter and the Thermal Emission Imaging System (THEMIS) on NASA's 2001 Mars Odyssey orbiter. The landing ellipse is 100 km x 15 km, and is centred on 2 degrees south in latitude and 353 degrees east longitude, in the Meridiani Planum region of Mars, close to the planet's equator. The map also contains the landing site and entire traverse of the Opportunity rover.

Below the main image are a pair of before-and-after images, taken by the CTX camera on 29 May 2016 (left) and 20 October 2016 (right), respectively. The 20 October image shows two new features appearing following the arrival of the Schiaparelli test lander module on the martian surface on 19 October.

One of the features is bright and can be associated with the 12-m diameter parachute used in the second stage of Schiaparelli’s descent, after the initial heat shield entry. The other new feature is a fuzzy dark patch roughly 15 x 40 meters in size and about 1 kilometer north of the parachute. This is interpreted as arising from the impact of the Schiaparelli module itself following a much longer free fall than planned, after the thrusters were switched off prematurely.

Context Camera takes large images of Mars at what is now considered a medium resolution of 6 meters per pixel (back in the days of Viking and Mars Global Surveyor, this was the highest possible resolution). The "fuzzy dark patch" looks a great deal like another impact site seen by Context Camera, where the Mars Science Laboratory descent stage crashed following the successful landing of the Curiosity rover. The descent stage likely had fuel remaining in it when it crashed, and is believed to have exploded on impact. So, too, would Schiaparelli, if its thrusters shut down prematurely. 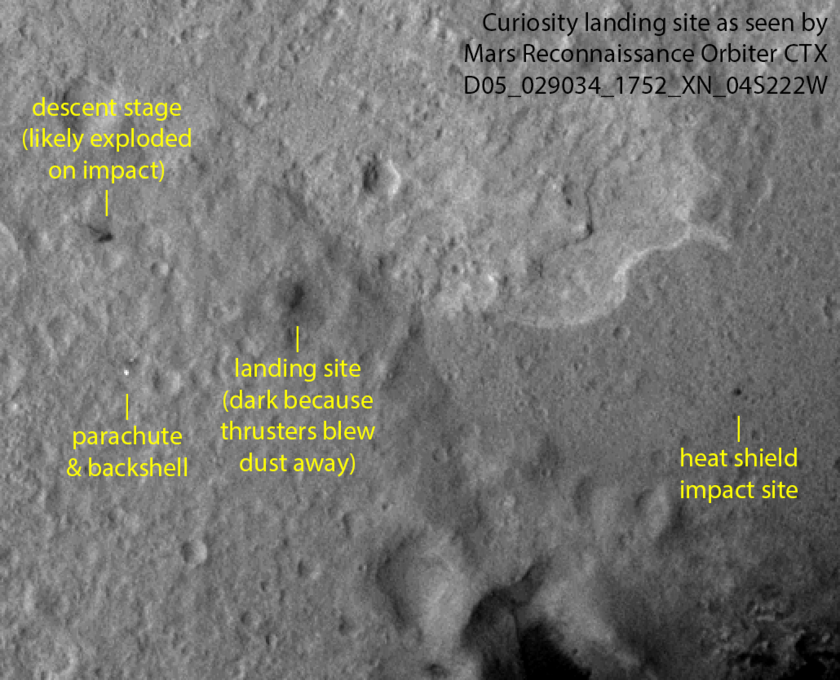 Curiosity's landing site as seen from Mars Reconnaissance Orbiter's Context Camera on March 8, 2013, about 7 months after landing. The image covers a region about 3.6 by 2.9 kilometers in extent.

Where is Schiaparelli's heat shield? ESA's update says the heat shield has not yet been revealed, but sharp-eyed viewers on both unmannedspaceflight.com and NASAspaceflight.com have pointed out a spot on the "after" image that is a distinct possibility, lying in the right direction and at an appropriate distance from the lander.

Time will tell if that guess is correct. Mars Reconnaissance Orbiter will follow up the Context Camera image with HiRISE imaging within the next few days, when imaging geometry is right. The relative positions of landing site and parachute will make it possible to target them both within the same HiRISE image, possibly both within the central color swath if the targeting is perfect. But to catch the likely location of the heat shield within one HiRISE image, they'd have to target the color swath away from the lander.

While I was looking at the image of the landing ellipse, I realized that I recognized the features. I knew that the Schiaparelli landing ellipse was very close to Opportunity, of course, but it was still a bit surprising to realize that the entire Opportunity mission has been contained within that one map. I measured, and the Schiaparelli impact site is 54 kilometers away from where Opportunity now sits on the edge of Endeavour crater. 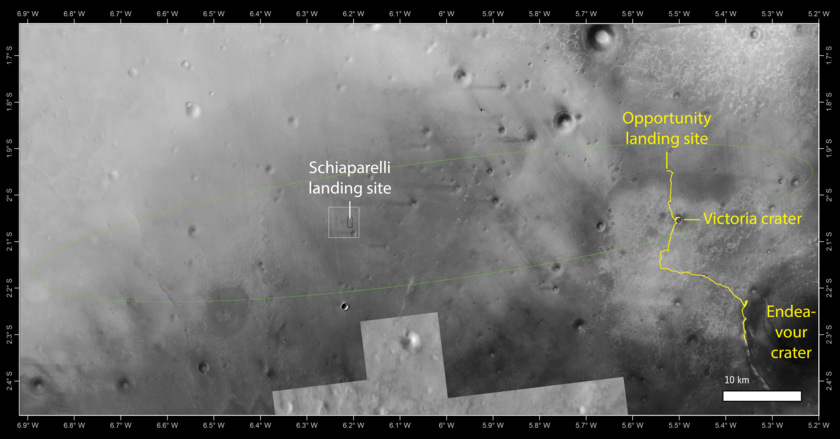 Schiaparelli was predicted to land within an ellipse (green) 100 kilometers long by 15 kilometers wide. The lander crashed very close to the center of the ellipse, within the black rectangle. The ellipse happened to overlap the location of the Mars Exploration Rover opportunity landing site, though the rover's current location on the rim of Endeavour crater is well outside the ellipse, 54 kilometers to the east-southeast. The yellow line is the path of Opportunity's traverse.

almost surprising that the parachute is so close

Any inference to be made from the separation of parachute and [landing/impact] site, about how far up it was when parachute separation happened? How far, if any, from nominal? Clues to loss of propulsion? (Shade of Mars Polar Lander haunting it? Near right time of year anyway. Sorry to hear it!)

Why the parachute of a lander traveling from west to east should land SOUTH of the lander?!?

Too bad it's west of Opportunity's original path, rather than ahead of where it's going. A close investigation of the wreckage would be quite interesting - certainly a first in space exploration.

@jumpjack I am FAR from an expert, but Martian winds comes to mind as a possibility.

@Rei: Indeed, if it really did explode near enough from the surface it would be interesting to see what the explosion kicked up/uncovered for Opportunity to discover.

I hate to ask, but was Roscosmos in charge of Schiaparelli's thruster design?