Cassini has been orbiting Saturn for as long as I've been a science writer. From the time of its orbit insertion in June 2004, Cassini was the first regular beat I was asked to cover as a writer at The Planetary Society. So it's especially hard for me to confront the fact that this long, wonderful mission is just about over. A year from today, it's going to plunge into Saturn.

The mission must end because it is nearly out of fuel. Originally planned to last 4 years in orbit, the mission was extended twice to cover Saturn over a total of half of its year around the Sun. Cassini arrived at the height of southern summer, and has watched as the Sun set on the south pole and rose on the north pole. The mission will see Saturn go through northern summer solstice before it ends.

The final year is going to be an exciting one. On November 29, a flyby of Titan will drop Cassini's closest approach to Saturn to a point just 10,000 kilometers beyond the F ring. Cassini will be able to study the weird phenomena of Saturn's rings and ringmoons closer than ever before, and will travel to never-before-sampled regions of Saturn's magnetic field. Then, on April 22, 2017, a final targeted flyby of Titan will shift Cassini's periapsis to a point between the innermost D ring and Saturn. On each close approach to Saturn, it'll fly within 3800 kilometers of the cloud tops. Cassini will see the planet, rings, and energetic particle environment from a new perspective, and have the first ever opportunity to measure the masses of the ring system and Saturn separately. A final nudge by distant Titan on September 15, 2017, will send Cassini to its death. 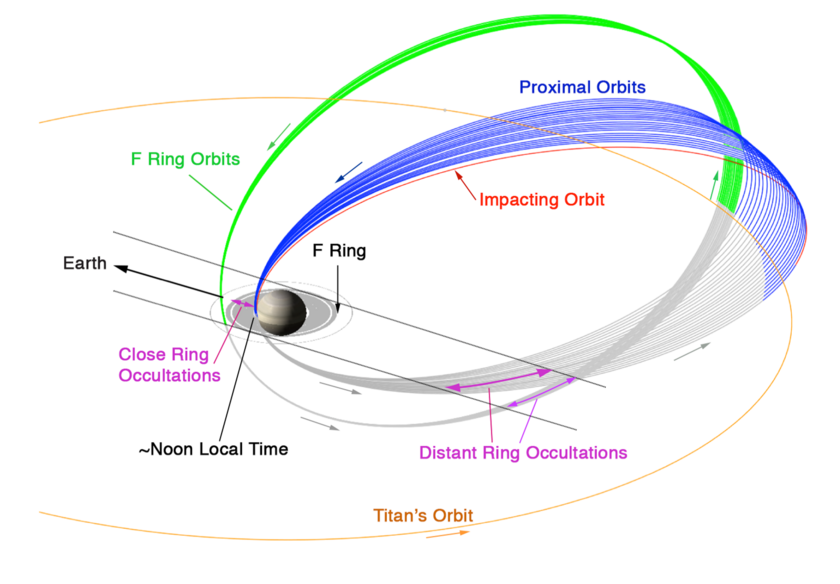 Near the end of its mission, Cassini will reduce its periapsis to come close to the F ring for 20 orbits (green) and then dive between Saturn and the D ring (blue) in the F ring and "Grand Finale" phases of the mission. Periapse happens at local noon on Saturn, providing the best possible gravity measurements, in order for Cassini to study the mass of the rings and the internal structure of Saturn, much as Juno will be doing at Jupiter at the same time.

This final year of Cassini's mission will actually look an awful lot like the Juno mission -- a spacecraft in a studying the inner workings of a giant planet from a polar, elliptical orbit that passes very close to the planet at periapsis. Except that Cassini carries a much larger (albeit older-tech and more-worn) instrument package. The fact that we'll have two spacecraft operating similar missions at different planets at the same time in the same solar environment will multiply our ability to understand how stars influence the physics of giant planets, and how giant planets work more generally. Basically, this final year of the Cassini mission will be like a whole New Frontiers mission tacked on to the end of a flagship mission. It's going to be awesome.

The awesomeness of the approaching final year of Cassini makes it hard to stay sad about its inevitable end. But once it does end, there'll just be Juno left studying the giant planets, the last of a long line of missions that began with the Pioneers. Once Juno ends, likely sometime in 2018, there's going to be a gap in which no mission will be operating or even on the way to any of the giant planets. 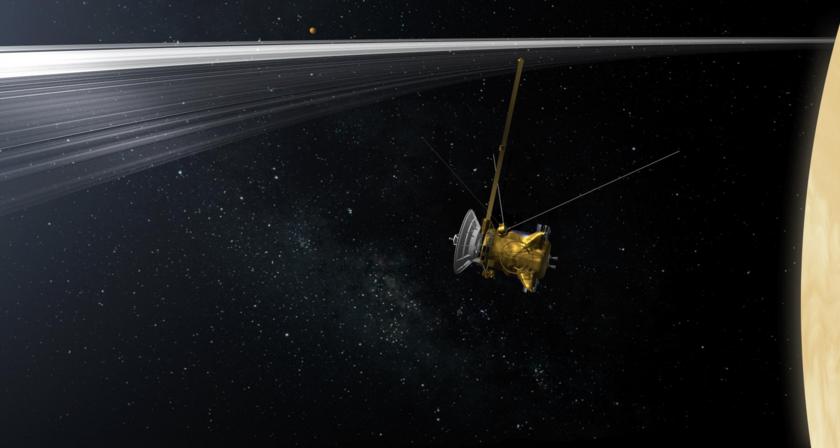 Artist's concept of Cassini passing between Saturn's rings and the planet during the final phase of the mission. In the background is orange Titan, whose gravity will nudge Cassini into Saturn impact on 15 September 2017.

The end of Cassini makes me sad too, and it brings into sharper focus how unbalanced our planetary exploration program is. We dropped the ball on the ice giants and on Venus. We're about to drop the ball on Saturn. We probably won't be going back to Pluto for a very long time. Meanwhile, we're sending new missions to Mars every two years, based on an outdated notion that Mars is the most likely place to find extraterrestrial life. At the very least we're going to Europa, but no thanks to NASA leadership, which apparently would be perfectly happy to keep blowing what little money planetary exploration has on its incrementalist, multi-generational Mars program of "follow the water". We're only going to Europa because of the admirable initiative of representative John Culberson. We need a u-turn in exploration policy that makes ocean worlds the new #1 priority. We may find barely surviving remnants of life on Mars, but we may find thriving, complex alien ecosystems below the ices of Europa, Ganymede, Callisto, Enceladus, Titan and even Pluto. I think it's clear what our priority targets should be.

To clarify my earlier comments, I don't want Mars exploration to stop, or be dramatically scaled down. In a perfect world, it would continue at its current level, and an ocean worlds exploration program that is at least the equal of the Mars program would be happening at the same time. That's not possible with the current starvation-level planetary exploration budget of ~ $1.5B per year or less. But it would be easily possible if that budget was increased to $2B per year, which would only require a net increase of NASA's total $19B budget by 2.6%. This brings me to the point of my post. In politics, you always get only a fraction of what you ask for. Negotiating with yourself and starting "reasonable" and pre-compromised gets you nowhere. I would like the Society to adopt a bolder, more aggressive lobbying position and demand what most of us here really want: a substantial increase of NASA's unmanned planetary exploration budget. Just meekly asking for a few hundred millions more, begging for 1.4 instead of 1.3 billions, or 1.5 instead of 1.4, is self-defeating. Let's ask for that $2B per year and let's make our case that such an investment more than pays for itself in innovation, jobs, economic stimulus and inspiring young people to go into STEM, and that the increase of $0.5B could be cut from our $600B defense budget without anyone even noticing that it's missing.

It will be a little sad to see Cassini go, but it has had a long, impressive life; indeed it's been for Saturn what Galileo should have been for Jupiter. Also I know the gap won't last forever: Jupiter will soon have 2 new visitors in the form of ESA's JUICE and NASA's 'Clipper mission. We may not have a new Saturn mission for some time, but I believe Cassini did an exemplary job and the focus should turn, if anywhere else, to the Ice Giants in regards to the Outer Planets.

I couldn't agree more with Bender772. * The death of Cassini makes me sad too... it's hard to come to terms with it ending. It was an immensely expensive mission, but worth every penny and then some. * NASA's Mars obsession in a nutshell: http://www.scientificamerican.com/media/inline/has-nasa-become-mars-obsessed_2.jpg * The "outdated notion" is spot on. We now know that we live in a solar system awash in worlds with liquid water and complex organic chemistry. Of which Mars is neither. We've pretty conclusively shown that it has no liquid water anywhere near the surface, and at least no large bodies at depth. We've shown that the regolith is virtually incompatible with organics due to highly oxidizing compounds such as perchlorates. Some people keep stretching to try to claim that there is or once was life. It comes across as pretty weak sauce. For example, the recent manganese coating thing - I read the paper on that. Wow, you found a thin coating on a rock in a *hydrothermal environment*, stop the presses ;) (I live in an active hydrothermal environment, depositing thin mineral coatings is what they do). And the assertion that the required oxidizer must have been oxygen... you're on a planet *awash* in perchlorates. I know they didn't find any at that *exact* location at that *exact* point in time, but... again, very weak. * It's weird to see congressional mandates overriding NASA in a good way, rather than vice versa... but then, there you go. Some of the new Mars missions sound more like they put out a Request For An Excuse To Have So Much Payload Capacity rather than an RFP. I mean, a 3-minute-flight helicopter on Mars, one of the worst bodies for flight - is this how we should be spending our money?

I tend to agree that we ought to send more probes (and astronauts) to Europa and other ice-worlds; the time may even have come for the first manned mission to Mars, and a reduction of probes there.

That poster from Scientific American was interesting. I noted that there was one planet completely missing. And that was not an accident (no recent missions at all).