The astronomy world is abuzz today because of ESA's announcement of the first release of data from the Gaia mission. Gaia is a five-year mission that will eventually measure the positions and motions of billions of stars; this first data release includes positions for 1.1 billion of them, and proper motions for 2 million. The map below does not show all 1.1 billion stars; rather it's a map of the density of stars that Gaia has measured so far, with brighter areas corresponding to more stars. 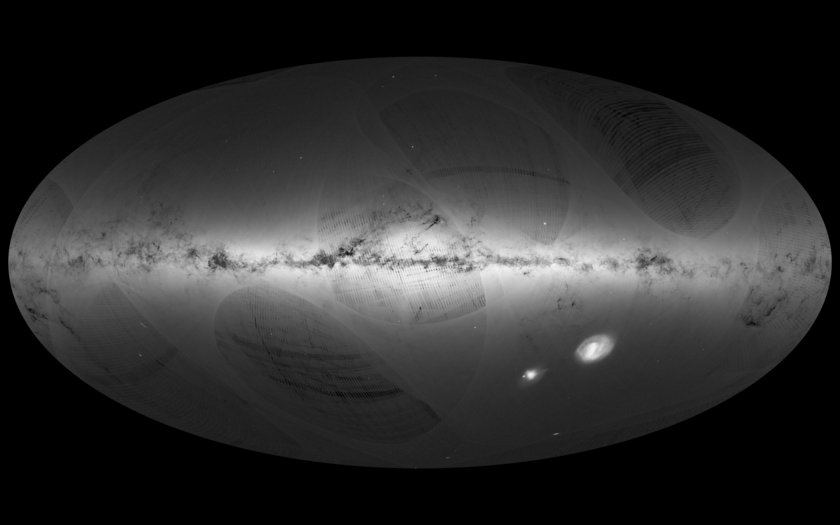 An all-sky view based on the first year of observations from ESA's Gaia satellite, from July 2014 to September 2015. This map shows the density of stars observed by Gaia in each portion of the sky. Brighter regions indicate denser concentrations of stars, while darker regions correspond to patches of the sky where fewer stars are observed. A number of artifacts are also visible on the image. These curved features and darker stripes are not of astronomical origin but rather reflect Gaia's scanning procedure. As this map is based on observations performed during the mission's first year, the survey is not yet uniform across the sky. These artifacts will gradually disappear as more data are gathered during the five-year mission. Learn more -- and download much larger versions of the map -- at ESA's website.

There's an excellent and very detailed writeup about today's announcement from the BBC. Right now the data set "only" has motions for 2 million stars because it takes more than one year's worth of observations to detect those motions; they can only compare the first year's worth of Gaia data to the previous best set of star positions derived from the Hipparcos and Tycho-2 star catalogs.

How is Gaia important to planetary science? Planetary science is, by definition, the study of the sky's moving objects. Astronomers discover minor planets (asteroids, comets, and other small bodies) by observing their motion against the background of stars. Our ability to predict the future motions of planets is therefore limited by how precise our catalog of the stellar background is. For the greatest precision, we need to know not only where the background stars are, but where they were in the past, because although we think of them as being fixed in the sky, the stars also move. That's where Gaia comes in. Comparing observations of our solar system's small bodies to the Gaia catalog will allow us to determine their orbital motions much more precisely than we have in the past.

More precise orbit determination will lead to better predictions of stellar occultations by asteroids and other bodies, helping astronomers plan observations to determine their sizes and shapes. For the outer solar system, the more precise orbits derived from Gaia data will lead to better-targeted observations and better population statistics, maybe helping to detect objects in interesting resonances with Neptune, astronomer Michele Bannister says. Another outer solar system astronomer, Wes Fraser, told me he's trying to use Gaia data to detect the wobbles arising from an trans-Neptunian object being not one bodies but two in a binary pair.

One very practical use of Gaia data in planetary exploration is for navigation by New Horizons to its Kuiper belt target, 2014 MU69. Because 2014 MU69 was discovered so recently, its orbit is not known to as high precision as they would like; Gaia can only help. The more precisely the New Horizons team can predict its future path, the more precisely they can point the spacecraft instruments at it -- in some cases they may be able to save significantly on precious data volume by reducing the number of observations they have to do to be sure they get the little thing in their field of view. They may also be able to target the point of closest approach closer, which means we could get higher-resolution images of it -- valuable because MU69 is expected to be quite small, only about 30 kilometers in diameter.

Although Gaia has detected hundreds of thousands of asteroids and a smaller number of trans-Neptunian objects, it won't lead to many new object discoveries, because its limiting magnitude of 20 is not nearly as faint as modern surveys like the Outer Solar System Origins Survey (OSSOS), which goes to about 25. However, there are hopes that Gaia observations will lead to the discovery of about 20,000 exoplanets.

For amateur astronomers and school groups, there's an ongoing citizen science opportunity with Gaia data. The public is invited to contribute observations of transient and variable phenomena through the Gaia Alerts website. Check it out and make your contribution to science!

If the science targets are achieved, I think this could be the greatest space telescope to date! Finally finding out where stuff is (the eternal essence of astronomy), getting a spatial orientation of our nearest billion stars neighbourhood. I bet that the number of astronomy papers published will spike in an unprecedented way now. And more all-sky survey telescopes with completely different targets are on their way. I think Gaia should be renamed after Tycho Brahe, who 450 years ago mapped the positions of stars and planets much more carefully than anyone before him, before the telescope was invented. And provided the data that Johannis Kepler used to establish scientific physics based on the movements of Mars, then built upon by Newton. Parents since the poet Jane Taylor 200+ years ago have lullabied children asleep with: Twinkle, twinkle, little star, How I wonder what you are! Up above the world so high, Like a diamond in the sky. When the blazing sun is gone, When he nothing shines upon, Then you show your little light, Twinkle, twinkle, all the night. Then the traveller in the dark Thanks you for your tiny sparks; He could not see which way to go, If you did not twinkle so. In the dark blue sky you keep, And often through my curtains peep, For you never shut your eye Till the sun is in the sky. As your bright and tiny spark Lights the traveller in the dark, Though I know not what you are, Twinkle, twinkle, little star. That won't work anymore. "- No mommy! Everyone knows exactly where all the stars are. Sing something else or I won't sleep."

This is the updated lullaby version I missed to link to, astronomically correct: https://www.youtube.com/watch?v=hhn-RzMELhY "You must be a small pulsar"

I'm hoping Tabby's star is included in this first batch... we really need to determine its actual distance as a first step to help uncover what the dimming is all about.