On August 27, Juno soared across Jupiter's cloud tops from pole to pole, with all instruments operating. NASA posted some terrific first results from several of the instruments today. And the JunoCam team released all 28 raw images taken during the close encounter. I've collected all the data onto a single page for easy browsing and downloading; I'll have more to say about that below.

First, a few fun movies. Here is the entire JunoCam movie of Juno's first orbit around Jupiter, processed by Gerald Eichstädt. Juno is continuing to take frames for a similar movie for Juno's entire second orbit (August 28 to October 18), though there will be a weeklong gap from September 23 to 30 while Jupiter passes through solar conjunction and communication with Juno will be difficult.

Next, this super-cool visualization of how the JIRAM camera sees Jupiter's dynamic atmosphere and aurora as the spacecraft spins.

Finally, turn on your speakers for this literally unearthly sonification of data from Juno's WAVES instrument.

OK, now for the images. Here is one of the ones I've been waiting for, a pole-on view of Jupiter. Whorls upon whorls! 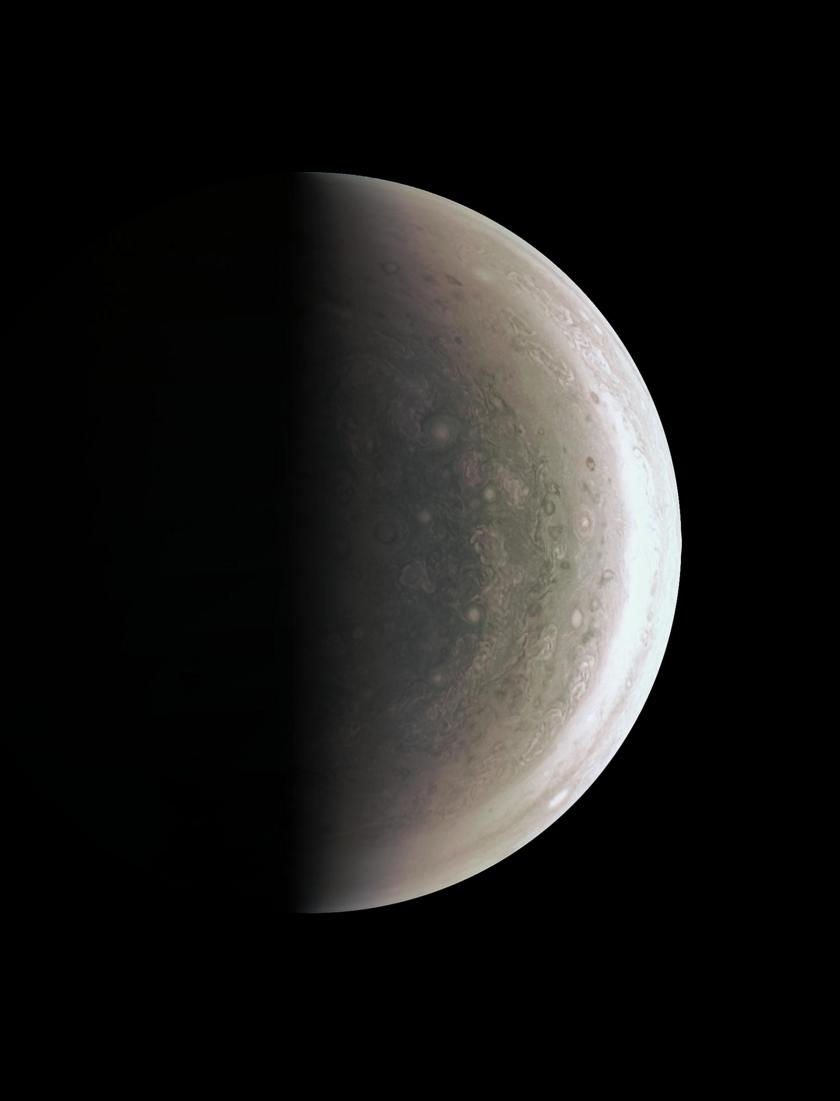 Juno took this photo of Jupiter while outbound from its first orbital perijove, on August 27, 2016.

Probably the coolest thing I saw in the JunoCam image releases was this view of a Jupiter storm that has enough vertical structure to cast interesting shadows as it rotates into sunset near Jupiter's north pole. At first glance it looks like an Enceledan polar impact crater -- but this thing is way bigger than that, bigger than Enceladus, closer to the scale of Earth! 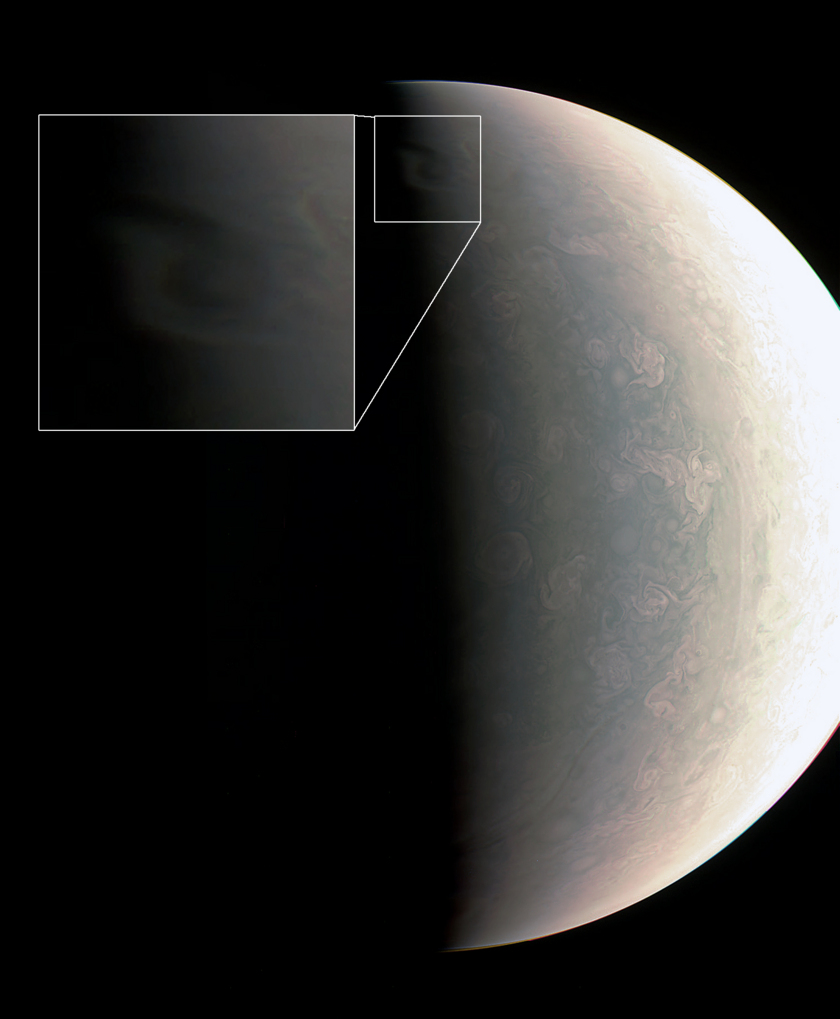 Shadows cast along the terminator (day-night boundary) of Jupiter show clear evidence for cloud topography near Jupiter's north pole. This photo was taken about an hour before Juno's closest approach to Jupiter on August 27, 2016.

You can find more fun images in the NASA release, including a few high-resolution views from approach, an arrival and departure sequence, and a grayscale cloud detail on the southern hemisphere. I wanted to step back and take a look at the totality of the JunoCam perijove 1 data set, now available on the JunoCam website. I found their gallery a little difficult to browse, but as there were only 28 images taken during the sequence it was easy to download them all and host my own browse page to the data.

There are some peculiarities about the data, because this first close approach was an opportunity for the JunoCam team to experiment with different viewing geometries and exposure settings. The team explains:

For example, we took 4 images of the north pole. We used two different settings for the time-delayed-integration (TDI), which determines the integration time, to see which would be best for the polar region and a very high TDI level (long exposure) to try to detect Jupiter’s aurora. We imaged at two different geometries, looking directly down at the pole and looking at closest range at a more oblique angle, to see which would give us the best results. We ran through a similar set of tests for the south pole. Another comparison we made was to test different compression settings.

We have a methane filter, included for the polar science investigation, that is almost at the limits of our detector’s wavelength range. To get enough photons for an image we need to use a very long exposure. In some images this results in scattered light in the image.  For science purposes we will simply crop out the portions of the image that include this artifact. Work is in progress to determine exactly what conditions cause stray light problems so that this can be minimized for future imaging.

So two of the images are deliberately overexposed in order to look for aurora (I didn't see any on a quick glance, but processing could yet yield something). Another oddity is the strong pixel bleeding visible in some of the otherwise dark methane-filter images, like this one. I usually associate pixel bleeding with overexposed images, but that's not what's happening here; instead, the JunoCam team has identified it as stray light. That is light that is not coming from the intended target but has rather bounced around inside the camera to hit the detector. It doesn't affect all the methane-filter images, so its presence depends on some as-yet-unidentified aspect of Juno's geometry at the moment the images were taken. The JunoCam team is going to try to figure out what geometry causes the stray light to enter the camera, and avoid it if possible, but there's quite a bit of atmospheric detail in the images outside of the areas affected by stray light, so they may just continue taking them as they are.

One thing I'm a little dismayed by is the very low contrast of the images taken near closest approach; it's hard to see any detail in them. But I think I've figured out why, and it will get better. The problem is that Juno's earliest orbits make their closest approach to Jupiter right at the terminator, where the setting sun strikes a very low angle across the cloud tops. This geometry makes for interesting viewing on solid-surfaced worlds, where the glancing light helps to highlight topography, but for an atmospheric place like Jupiter the light filters through the uppermost atmosphere and it's hard to see much detail. As Juno's orbit evolves, it'll get better-lit views at closest approach, so hopefully the contrast will get better with time.

Meanwhile, we can enjoy the fantastic expanse of JunoCam's field of view when it's farther away from Jupiter. Here are two processed stills from the end of the Marble Movie, capturing Jupiter and moons in the same field of view. There are few space cameras with a broad enough perspective to take all of this space in at once.

Juno took this expansive view of Jupiter with two of its moons on August 26, 2016, on approach to its August 27 perijove. Juno was about a million kilometers away from Jupiter at the time. Both moons are farther away from Juno than Jupiter is. Europa is at left, Io at right. 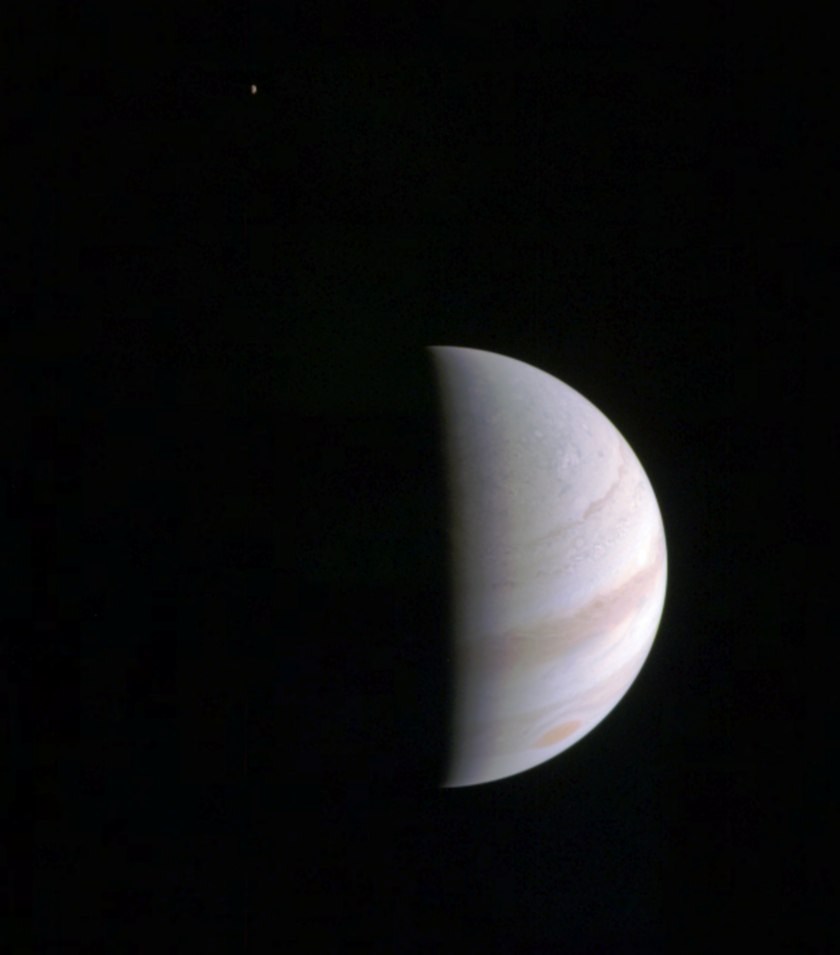 Juno captured this view of Jupiter with its innermost large moon Io on approach to its first orbital periapsis, on August 27, 2016. Juno was about 630,000 kilometers from Jupiter at the time.

It is really interesting to see the active and complex atmospheric circulation patterns at Jupiter's polar regions but there's no repetition of Saturn's very distinct hexagonal polar cloud pattern.