NASA announced this afternoon that Juno passed through its first perijove since entering orbit successfully, with science instruments operating all the way. This is a huge relief, given all the unknowns about the effects of Jupiter's nasty radiation environment on its brand-new orbiter.

NASA's Juno mission successfully executed its first of 36 orbital flybys of Jupiter today. The time of closest approach with the gas-giant world was 6:44 a.m. PDT (9:44 a.m. EDT, 13:44 UTC) when Juno passed about 2,600 miles (4,200 kilometers) above Jupiter's swirling clouds. At the time, Juno was traveling at 130,000 mph (208,000 kilometers per hour) with respect to the planet. This flyby was the closest Juno will get to Jupiter during its prime mission.

"Early post-flyby telemetry indicates that everything worked as planned and Juno is firing on all cylinders," said Rick Nybakken, Juno project manager....

While results from the spacecraft's suite of instruments will be released down the road, a handful of images from Juno's visible light imager -- JunoCam -- are expected to be released the next couple of weeks. Those images will include the highest-resolution views of the Jovian atmosphere and the first glimpse of Jupiter's north and south poles.

They released one processed image from JunoCam, taken on approach to perijove, from a distance of 703,000 kilometers. I checked JPL's Horizons web tool and determined that the photo was captured two hours before closest approach, roughly an hour before the spacecraft would have passed over the north pole. So it's just a taste of the awesome imaging to come -- there should be much better stuff in the future. For now, though, just pause and appreciate what an unusual view this is -- a crescent Jupiter, tipping over to show its north pole to us. 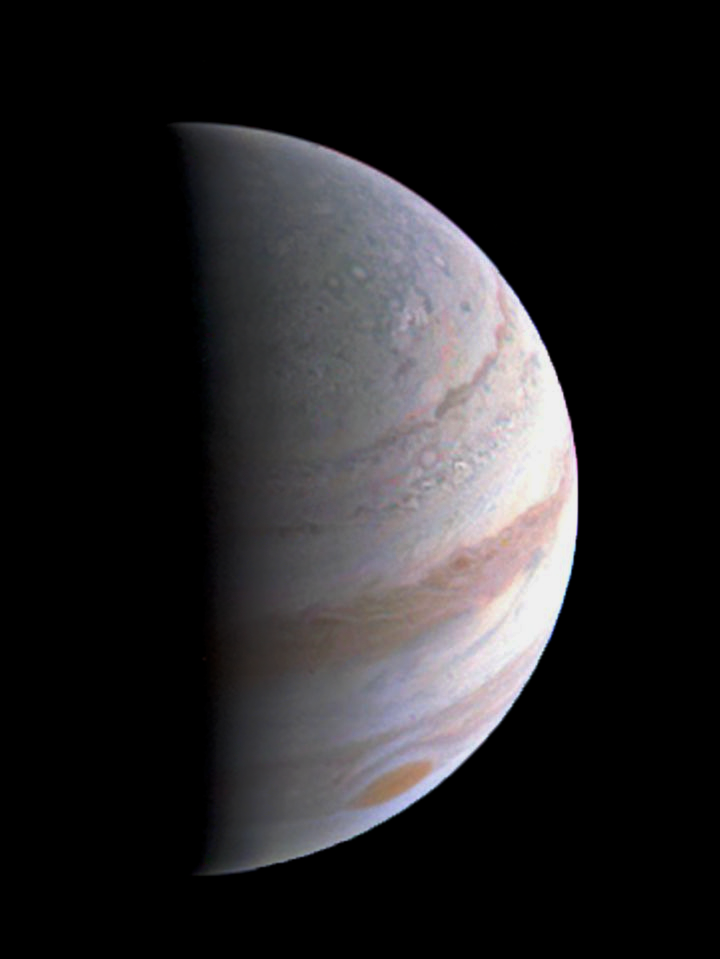 Juno captured this photo of Jupiter about two hours before Perijove 1, from a distance of 703,000 kilometers, at 04:45 UTC on August 27, 2016. The spacecraft had yet to travel over Jupiter's north pole.

I don't know what other images have been planned, because the mission has inexplicably chosen not to share information with the public about those plans. This is really weird, because Cassini and New Horizons were both very open about their plans for imaging with their science cameras. Juno's JunoCam is an instrument intended specifically for public outreach, and yet they're keeping information about it close to the vest. Apart from the types of imaging mentioned in the press release, there has been discussion of attempting 3D imaging of clouds by taking images closely spaced in time as the spacecraft passes from north to south. There was also an opportunity to image Ganymede yesterday. We'll have to wait and see!

Late last week the Juno team did release more frames from the "Marble Movie," teeny snapshots of Jupiter taken through August 22. I've posted all that data to my JunoCam data page. Gerald Eichstaedt made thumbnails of all the images, and I assembled them into this movie montage. Have fun hunting for moon and shadow transits! Data should now be on Earth for everything that JunoCam imaged between these frames and the photo shown above; I'll certainly let y'all know when it's publicly available.

During its first long orbit around Jupiter, JunoCam took color photos of the planet every 15 to 30 minutes, seeing it spin, watching the red spot, and observing moons and moon shadows crossing the disk. Access the raw data for all these images here.

Nice image, can´t wait to see more! Are you (or someone else) stitching together those little pictures into a movie?

It's regrettable that NASA still hasn't learned how damaging secrecy, proprietary periods and failure to immediately release science data are to its public image. It encourages conspiracy theories about data manipulation and suppression of evidence for all kinds of outlandish claims. To astronomy and space enthusiasts, secrecy and data release delays cause feelings of disappointment and betrayal, especially when expectations of openness and quick image release were raised and then predictably disappointed. This happened last year too with the New Horizons close encounter images.

@Palladio: If you can play an AVI with a sufficently high data rate on your computer, you may like to download and test the video provided here: http://junocam.pictures/gerald/uploads/20160827/ It's the most complete and best-processed version of Marble Movie I can currently offer.

Bender772 is right on. The reason for the secrecy is that Jupiter is not the 'gas giant' in the textbooks. The Juno team already sees this in the data, but how to admit this embarrassing fact to the scientific world presents a big problem.

Keep in mind that Juno is designed to be a Kamikaze mission. Obviously secrecy is NASA's top priority on this mission. Taking pretty pictures of Jupiter is not Juno's primary mission. I still think crashing Juno into the dense atmosphere is a waste of tax dollars.

Greetings, I am discussing image release policies @ The Space Review: http://thespacereview.com/article/3052/1 I'd just like to point out the following paragraph: "I believe that space advocacy organizations like The Mars Society and The Planetary Society could greatly help. It was The Planetary Society’s efforts that made the New Horizons mission possible. In the future, they should not just push for future missions, but also insist that timely image releases be a requirement for them. Thus, the principal investigators and scientists involved in the missions will know the conditions under which they’ll participate on them. "

Any idea of what the actual resolution of the Juno cam is. Pixel wise that is. Really looking forward to the close up pictures like everyone in the scientific community is.

@tanoose: JunoCam's resolution is 1600 pixels for a 58 degrees field of view. On closest approach to Jupiter that's about 2.9 km per pixel, since [4200 km * tan (58°/2)] / 800 pixels = 2.9 km / pixel. Actually that's some mean value, and the resolution varies a bit across the field of view. From larger distance the resolution in terms of km / pixel on Jupiter's cloud top increases proportional to the distance. This means, that for many images a pixel will correspond to more than 10 km on Jupiter's "surface".

Re publishing poily: The main objective for the perijove 1 imaging on August 27 has been testing the camera in proximity of Jupiter to prepare for the science orbits starting in November. Therefore don't expect each image being perfect. And consider a week delay or so, before data are downlinked over hundreds of millions of km, and accurate trajectory data become available; those are needed for reasonable processing of close-up images of Jupiter. Add some time for processing, packaging, website update. After this timespan for technical reasons of up to two weeks, policy considerations are going to become relevant.

@Gerald thanks for the info. That is impressive and should yield some great pix.

I am sure most people have seen the article in the Telegram with the headline 'Nasa unveils first pictures of Jupiter's poles: 'It's like nothing we've seen before' and accompanying picture.

Sad. The hype the program, launch, trip to Jupiter...get us on the edge of our seats and then silence? Quite the let down. Or if I took a lead from the alien TV shows.....they found a base there.