The Planetary Society at San Diego Comic-Con (UPDATED with video!)

I'm going to be at Comic-Con tomorrow (Friday, July 22), for the first time ever (eep), participting in a panel called "Science Fiction/Future Now." There are five terrific science fiction authors and me, serving as the representative of "science fact," and we're planning to discuss how recent scientific discoveries and engineering accomplishments feed back into the worlds that fiction writers dream up:

Science fiction has ever been the muse of real-world advances, but now ideas can be achieved almost as soon as they are thought up. So how do writers, out-dream the dream makers? How do writers handle the truth of real science and the fiction that is needed for writing their stories? Is it a crisis for the writer's imagination? Or does it serve to inspire?

Here are the participants, with links to their various websites -- I'm honored to be in such company:

The panel is in room 26AB and runs from 4:30 to 5:30. There's a book signing after -- I don't have books, but I'll have Planetary Reports. If you can't make it to San Diego, never fear! Stalwart Planetary Society staffers will live streaming the panel on our Facebook page, and I'll post a recording of the event here after it's all over. 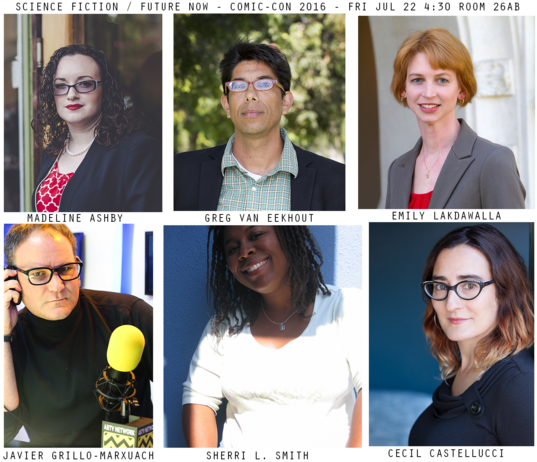 SDCC attendees can also see a panel featuring Planetary Society Board member Robert Picardo on Saturday: "Trek Talks: Star Trek & NASA Boldly Go." That one won't be broadcast live, so attendees will have to tell me how it goes! You can check our Facebook page after the event for photos.

Star Trek has influenced many of us to fall in love with the infinite possibilities of space exploration. The various television series and films have also made an indelible impact on NASA. NASA scientists, engineers and astronauts often cite Star Trek as inspiring them to pursue careers in their fields. (Nichelle Nichols even helped NASA recruit astronauts in the 1980s.)

Today, NASA is turning science fiction into reality. Humans now live and work in space full time on the International Space Station. SNASA continues its goal of sending humans to Mars in the 2030s. How does NASA's vision of the future mimic the world of Star Trek and where does it differ? What technologies in the Star Trek world have paved the way for real technologies being developed by NASA?

sounds fun! wish i could listen to it. anyone thinking of periscope?

'Is it a crisis for the writer's imagination? Or does it serve to inspire?' - The latter, on to next question. (An aspiring scifi writer) Envy, envy, envy :) We need something like it here in Europe. But Cory Doctorow is not invited to the panel? In case he was forgotten, he usually is there. Just have a look around, he should be scurrying about somewhere.