Today, the Rosetta OSIRIS team's Image of the Day is this highly unusual view of the comet with the Sun very nearly behind the spacecraft. As with all OSIRIS images, it is worth it to click through twice to enlarge it to its full size. However, one of the most scientifically interesting aspects of this photo is best viewed from a distance: the opposition surge. 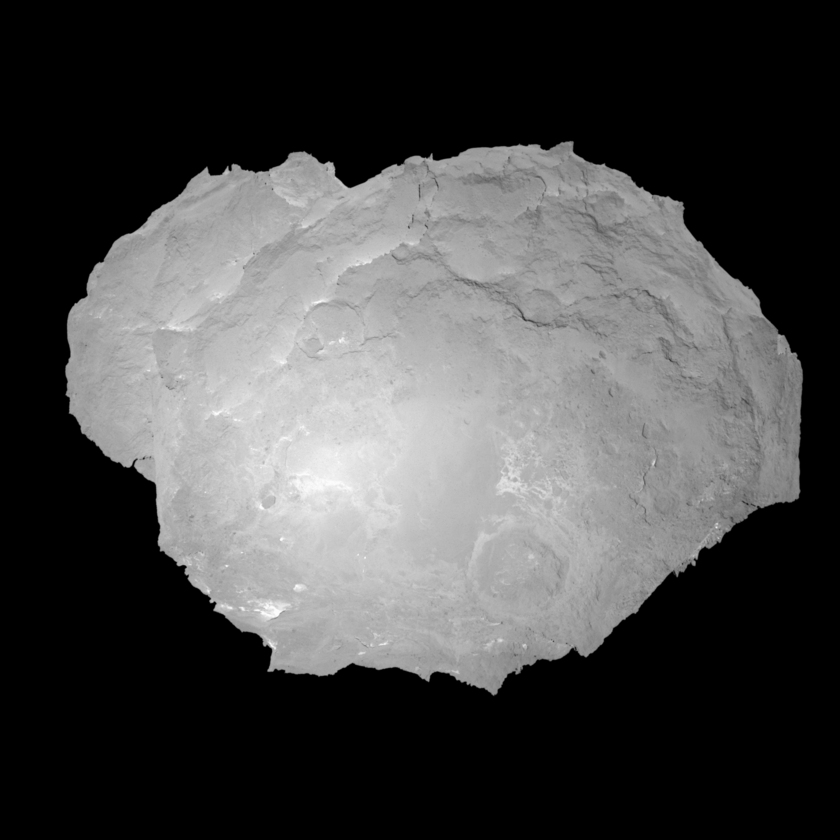 Comet 67P/Churyumov-Gerasimenko seen by Rosetta OSIRIS with the big lobe in front during a "zero-phase" flyby on April 9-10 with the spacecraft positioned almost exactly between sun and comet (phase angle 0.9 degrees). This unique observing geometry reveals optical characteristics of the surface that cannot be seen otherwise.

Opposition surge is an optical effect of rough surfaces. On just about every scale, this comet has a rough surface. The little lumps and bumps of topography on a rough surface cast little shadows on other visible parts of the surface. When you view a rough surface from a distance, you can't see any of those little individual shadows, but together they have an effect of darkening the surface. But that changes when the light source is directly behind you. You can't see any shadows, because they are being cast underneath all the surfaces that you can see. The surface at the subsolar point appears brighter because you can't see the shadows anymore. By measuring how large the opposition surge is, and the area over which it is visible, scientists can deduce some of the physical properties of the surface at scales much smaller than can actually be seen in photos.

Opposition surge is visible when you are observing an object at a phase angle (the angle from light source, to object, to observer) of close to zero degrees. Here's a little visual explainer of phase angle for another object that shows an opposition surge, Saturn's moon Rhea. I made this diagram for a longer post explaining phase angle.

The angle from the Sun, to a moon, to the observer is called "phase angle." This montage shows Saturn's moon Rhea as seen by Cassini through a clear filter at a variety of phase angles. The images have been resized to a constant pixel scale and rotated so that the terminator is up-and-down; the images sample a variety of latitudes and longitudes.

The Rosetta photo reminded me of one of my favorite space exploration images, a similar zero-phase view from Hayabusa of asteroid Itokawa. 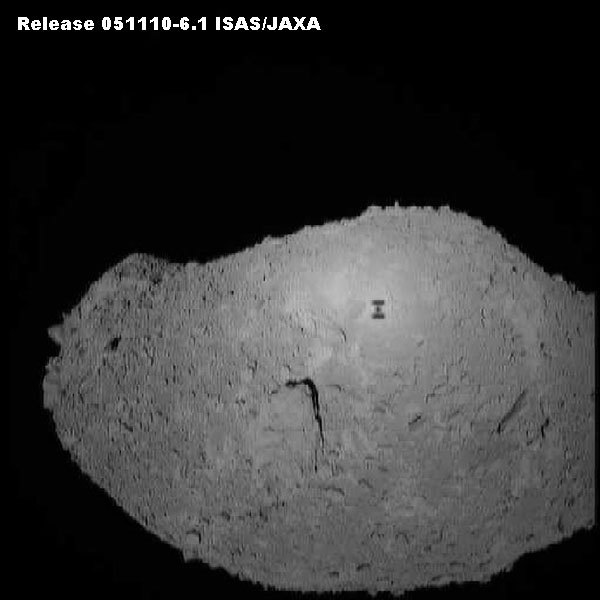 Hayabusa captured this photo of Itokawa as it passed between the Sun and the tiny asteroid on November 10, 2005. Hayabusa's shadow is visible on the surface of the asteroid -- a tiny spacecraft causing a tiny solar eclipse on a tiny object.

We can see Hayabusa's shadow in this photo because Hayabusa was much closer to the comet, so close that an observer on the comet's surface would have seen Hayabusa blot out the Sun entirely. Rosetta hasn't gotten a photo from that close...yet. Toward the end of its mission, this September, it will be spiraling ever-closer to the comet, and recent testing work on a bench model of the OSIRIS Wide-Angle Camera shows it's capable of shooting photos from distances as close as 15 meters. But Rosetta would have to be close and in exactly the right image geometry to shoot its cast shadow on the surface. I'm not sure that that will happen, but since there are good scientific reasons for doing low-phase observations from a variety of distances, I'm hoping!

Hi Emily, Rosetta did take another image at zero phase angle form a much closer distance (6km). You can see it here: http://blogs.esa.int/rosetta/2015/03/03/comet-flyby-osiris-catches-glimpse-of-rosettas-shadow/ Although we were not close enough to observe our shadow with as many details as Hayabusa, we could clearly see the overall shape of the spacecraft.