ESA's ExoMars Trace Gas Orbiter and Schiaparelli lander are in the final preparations for a launch as early as Monday, toward an October 2016 Mars orbit insertion and landing in Meridiani Planum. These two spacecraft represent the first half of the ExoMars program, which is a cooperative effort between ESA and Roscosmos. The second half is a rover and lander currently planned for a 2018 launch, with a January 2019 landing in Oxia Planum. In addition to its scientific mission to search for methane and related gases in Mars' atmosphere and to understand where they come from, the Trace Gas Orbiter will serve as a communications relay for Schiaparelli and the future rover and lander. 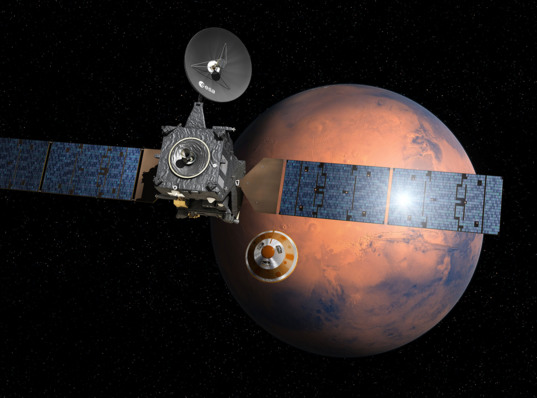 Artist’s impression depicting the separation of the ExoMars 2016 entry, descent and landing demonstrator module, named Schiaparelli, from the Trace Gas Orbiter, and heading for Mars.

ESA will begin livestreamed launch coverage at 08:30 UT or 01:30 PDT on Monday, March 14. Here is an extremely detailed article describing what to expect on and after launch day. The spacecraft will be launching on a Proton-M rocket from the Baikonkur Cosmodrome in Kazakhstan. Launch is expected at 09:31:42 UT (02:31:42 PDT, ouch; I am not sure that I will be awake for the launch). The payload fairing will separate 5 minutes and 47 seconds after launch, exposing ExoMars to space for the first time; Schiaparelli is perched on the top of the spacecraft, aiming in the "ram direction." A Breeze-M upper stage will send the spacecraft on to Mars, with separation at 20:13 UT (13:13 PDT). ESA expects to hear the first signals from TGO at around 21:28 UT (14:28 PDT). I will not be completely relieved until I hear that the spacecraft has deployed its solar arrays successfully and is power-positive. Here is a great video explainer that takes you from launch to landing and orbit insertion:

In addition to the Livestream, you can also follow @ESA_ExoMars, @esaoperations and @esascience. There is an official Twitter account for @ESA_TGO, but according to ESA it won't be activated until "mission controllers have established contact with TGO following the fourth stage separation and acquisition of signal." I can't wait for that account's first Tweet! "Hello, world" doesn't seem appropriate -- will it say "goodbye, Earth" instead? There is not a separate Schiaparelli account; since the lander won't survive more than a few days, it would be cruel to imbue it with a personality. It's better regarded as one of the instruments on Trace Gas Orbiter.

Best wishes to ESA and Roscosmos for a safe start to their Martian journey!

There's a first time for everything! I hope the Russians hit their red star this time.

Let's hope the Russians don't give the ESA cause to regret allowing them to launch ExoMars. I mean just how long can the Russians' streak of bad luck with Mars missions really be? After a long and wildly successful career that mean old Mars Ghoul has surely reached the mandatory ghoul retirement age and given up haunting Russian missions and gone to live in the Old Ghouls' Home. At least that is probably what the ESA has got its fingers crossed for. Lots of luck to them!

Best wishes for success for the Russians (and Europeans) on the launch and whole mission of ExoMars 2016. Hoping they find more definite evidence of elevated methane in Mars' atmosphere. Also when will we hear more results and more testing including using the Curiosity SAM instrument in the search for elevated methane in Mars' atmosphere from the surface?

Today's launch from Kasakstan was fine (and on time too) thank goodness. with low cloud cover, and no airborne or onboard cameras, the visual coverage was disappointing.

11h00UTC. We're not out of the woods yet: The breeze M upper stage must be fired three more times to achieve Mars trajectory injection. cutaway of Proton-Exomars launch configuration here: http://www.aero-news.net/index.cfm?do=main.textpost&id=e06606b3-1900-45a9-8515-ef89101f91d9