Three years ago, I signed a contract to write a book on Curiosity, to be published in 2015. I made a lot of progress initially but various events in real life intervened, and for about 18 months I did no work on it at all. I'm pleased to report that I'm finally back to work on the book, and it has a new title, and I intend to finish it this year, for publication by Springer-Praxis next year. The new title is Curiosity Rover: Design, Planning, and Field Geology on Mars. You can't preorder it yet, but if you send me an email I'll send you an email when you can.

The delay has been a good thing for the book, and I'm not just rationalizing. Several books on Curiosity came out in the year or so after its landing, which meant that they covered the drama of the preparations for launch and its journey to Mars but almost none of the science mission on the surface. Yet, discoveries at Yellowknife Bay and The Kimberley notwithstanding, Curiosity didn't really start doing the kind of long-term field geology campaign that it was originally envisioned to do until it pulled up at Pahrump Hills around sol 751, late in 2014. Since then, it's been one scientific stop after another, systematically working its way upward through the rocks of Mount Sharp. Because of the delay, I now get to write about the good part of the mission.

I've only just begun writing the chapters about the surface mission (although the Curiosity coverage I do for this blog is obviously related to my research for the surface operations and science results parts of the book). For the book I've already written about Mars geology in general, and the development of the mission, and the landing site selection process, and most recently I finished a draft of the chapter on the journey to Mars, from arrival in Florida to arrival in Gale crater. It's not just writing. I spent much of the last week crafting explainer images like this pair, detailing all the parts of Curiosity's rocket-powered jetpack, more correctly known as the Descent Stage: 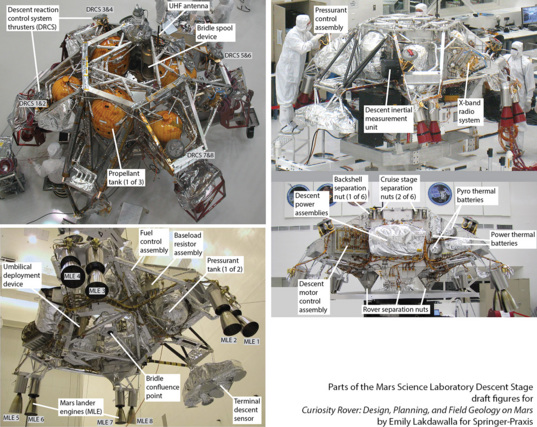 I'm really enjoying myself working on the book; nearly every day I come across some cool little fact, like this one.

Getting back to work on the book does mean that I'm going to be less present here on the blog. I'm going to try my best to keep up a cadence of two blog posts per week, but I must finish this book this year and that means I won't always have time or focus for other writing. To keep the blog fresh, I am spending an equivalent amount of effort editing guest blogs like this one and this one. If you are a space scientist, engineer, educator, or student and you have a story to tell or something to explain, please contact me to help me keep this blog going while I focus on the book! I will also happily repost articles from the personal blogs of people involved in space exploration and education, to help you reach wider audiences.

Looking forward to the book. I hope that you'll be able to discuss a lot of the geology and the behind the scenes analysis that led the use of the rover and the interpretation of the results.

I would suggest tweaking the title to the slightly shorter "Mars Rover Curiosity: Design, Planning, and Field Geology". That way, you would also avoid having the syntactical error that "Curiosity Rover" represents on the cover of your book.

For what it's worth, Al, I like her title better. "Mars Rover Curiosity" sounds silly to my ears. It is the Curiosity rover. It's always been called that.

The reason "Curiosity rover" sounds OK to a lot of people is that it appears at first hearing to be an analog of, say, "Viking lander". But it isn't; "Viking" is a mission name and "Curiosity" is merely the name of the rover, so "Curiosity rover" is an exact analog of "Mars planet". Perhaps if people started saying "Mars planet", "planet Mars" would start sounding silly to peoples' ears, but it is the correct syntax and it shouldn't.

Curiosity work on Mars geology findings should be more exciting-the end result.At the end of the mission what is important is-methane presence,carbon amount ,quality leading to presence of diamond,life trace-microbe,lichen indicated by hydrogen in methane or otherwise, due to presence of water,hydrothermal reactions.Curiosity does not end there.Perhaps alien sighting may be possible .If man lands on Mars,he is likely to encounter aliens,or due to the conditions prevailing there,and due to 'exalted' condition of body,mind,he may try to have a 'link' with Cosmos,and see lots of 'visions' he may not have experienced before.