Geologist and amateur space image processor Justin Cowart has been taking a dive into Mars Express' High Resolution Stereo Camera (HRSC) data lately and posting some of the results on his Flickr page. The best science from HRSC has been done on their highest-resolution pictures, taken close to the planet, but I really enjoy the wider views that HRSC takes when much farther away from Mars on Mars Express' highly ellptical orbit.

I'm not sure I can recall a prettier picture of the four great volcanoes of Mars' Tharsis region: 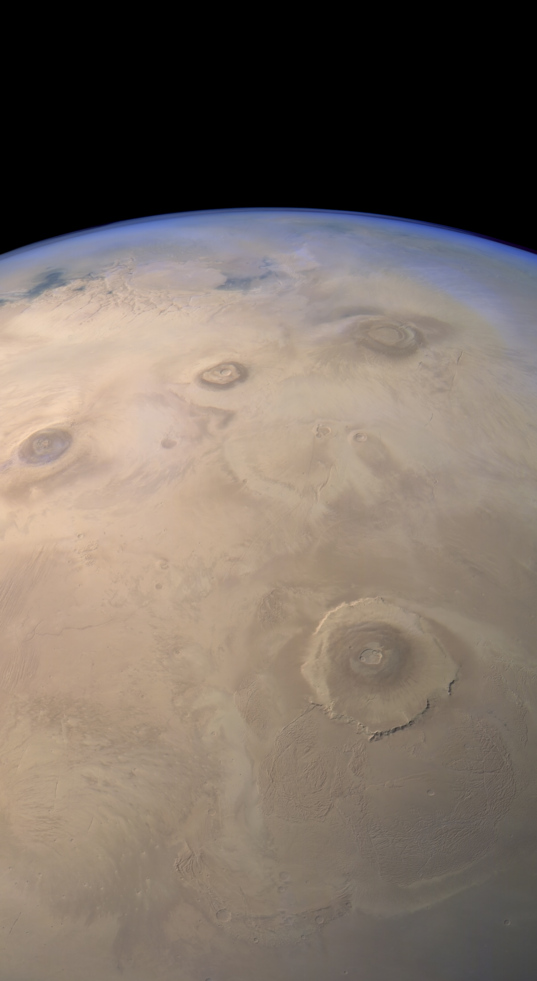 Widefield image of the Mars' Tharsis volcanic region, captured on June 29, 2014 during Mars Express' 13,323rd orbit of Mars. Olympus Mons is at center. Across top center from left to right are Ascraeus Mons, Pavonis Mons, and Arsia Mons. Noctis Labyrinthus can be seen near the horizon at top left. Click here for a lossless PNG version (10 MB).

And here's another broad view across the other major volcanic province of Mars, Elysium:

This wide Mars Express view takes in Mars from Utopia Planitia in the north, across the volcanoes of Elysium Mons, to Elysium Planitia in the south. It was taken on June 11, 2014. Click here for a lossless PNG version (68 MB).

Here's Mars' north pole, a nice pair to the one that the mission released of the south pole a while back:

And finally, one higher-resolution image, containing a beautiful rime of morning frost in the mountains next to Hellas basin.

Frost in the Hellespontus Montes, Mars

Mars Express captured this atmospheric view of morning frost on the Hellespontus Montes, on the western edge of Hellas basin, on February 8, 2014. Click here for a lossless PNG version (22 MB).

Och! Wow! Zarquod! This is dream-material for the coming night!

Very pretty pictures. Mars' north pole looks like a frozen hurricane. The link to the lossless PNG file for the first image (Tharsis volcanic region) is broken. It is missing the .png extension at the end.

Thanks for pointing out the link problem, I've fixed it!