JunoCam cruise data, and a look ahead to Jupiter

Juno is now fewer than six months and 100 million kilometers away from Jupiter, and the Juno team is busily preparing for the arrival. The Juno color camera, JunoCam, plans to take their first Jupiter approach photo later this month. Jupiter will be only about 2 pixels across, but it's a milestone I'm greatly looking forward to anyway! (As a general rule of thumb, divide 210 by the range to Jupiter in millions of km and you'll get Jupiter's apparent diameter to JunoCam, in pixels.)

JunoCam has been occasionally taking images throughout Juno's long cruise, but most of them are of starry space, taken to calibrate the camera and to search (unsuccessfully, it seems) for zodiacal light. Much of the cruise data has now been shared on the Malin Space Science Systems website, which had already posted the Earth flyby data when that happened back in 2013.

The raw data set is a fairly difficult one to work with because of JunoCam's peculiar nature. It's a pushframe camera that uses spacecraft spin to build up image strips, so each image is a long, skinny noodle made up of numerous "framelets" that aren't always easy to assemble into coherent images. For serious spacecraft imaging nerds, I've made an index page to the currently available JunoCam cruise data. JunoCam has a wide (58-degree) field of view and often takes 360-degree image swaths, so if you're capable of convolving the JunoCam images with metadata about the spacecraft's position and pointing and planetary position information, you might find a wandering planet as a point of light here and there in the raw data, which would be fun. Once JunoCam begins imaging Jupiter, they'll begin sharing images in a way that's much more accessible to the public.

In the meantime, JunoCam seeks public input into where they should take their photos once they arrive at Jupiter. Late last year they launched their public website, where they're already accepting uploads of amateur astronomers' Jupiter images. JunoCam team member Glenn Orton will use those amateur-produced images to create Jupiter maps for the public to use to request targets for future JunoCam images. Because Jupiter is so dynamic, Glenn will have to create a new one of these maps for every orbit; they need lots of great astrophotos from amateurs. It looks like the amateur astronomy community is already participating with enthusiasm; the gallery contains lots of up-to-date, fantastic amateur contributions, plus recent observations from professional facilities by Glenn. Here's an especially nice recent photo from Christopher Go. 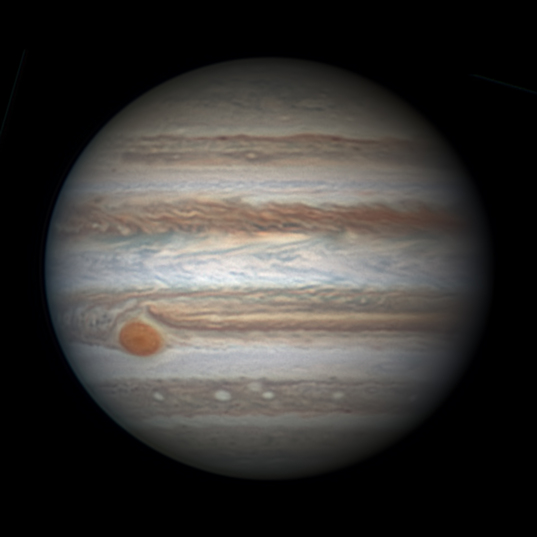 One idiosyncrasy of the JunoCam site: to participate, you have to create a profile, and to comply with NASA privacy rules the JunoCam site enforces anonymity by assigning profiles an auto-generated username that consists of the name of an asteroid followed by a number. (Christopher Go is "Ceres-00".) Of course, the amateur astronomers who participate usually like to get credit for their photos, so you'll often, but not always, see their real names embedded in their images. Here is a non-exhaustive list of the identities of JunoCam site usernames and corresponding real names of amateur astronomers. (I only include those who have embedded their names in their contributions so have already de-anonymized themselves.) I've tried to look up websites for each of them but wasn't always successful; where I couldn't find a website, I indicate amateur astronomy groups in which they're active, through which they can likely be contacted. If you see any errors or would like to claim one of the unidentified profiles as you, please comment below or send me an email.

These amateurs have been supporting Jupiter science with their photos for decades through projects like the Planetary Virtual Observatory and Laboratory. I'm grateful to them for their efforts!

Speaking as the Juno Co-Investigator responsible for JunoCam operation- we are happy to receive pictures of Jupiter at all levels. We use the highest resolution ones for the maps, but we will use the lower resolution pictures to fill in the time history.