Jupiter has got to be one of the most rewarding targets in the sky for amateur astrophotographers. Its disk is very colorful, and its giant moons are colorful too. From night to night you can watch the moons move, and occasionally you'll see them cast dark shadows on Jupiter's disk. If your telescope and camera are powerful enough, you can discern fine patterns in Jupiter's clouds, and watch the details change from night to night. If you're patient enough to watch Jupiter year over year, you can see dramatic changes in the colors, positions, and behaviors of its clouds.

Damian Peach is an astrophotographer who's been following Jupiter for many years. He recently returned from his eighth observing trip to Barbados, and shared his photos of Jupiter, Saturn, and the Moon with the world. Here are views of Jupiter that he has shot over the last six oppositions (seven years), from 2009 to 2015.

The most obvious change in the series is the one that took place over the winter of 2009: the disappearance of one of Jupiter's red belts. But pick a belt, any belt, and look for it in opposition after opposition and you'll see there's a lot of other change happening. This year, the Great Red Spot, although small, is much darker than it has been in past years, while Oval BA (the little red spot) is very, very pale. Here's another nice photo of Jupiter from Peach's latest trip: 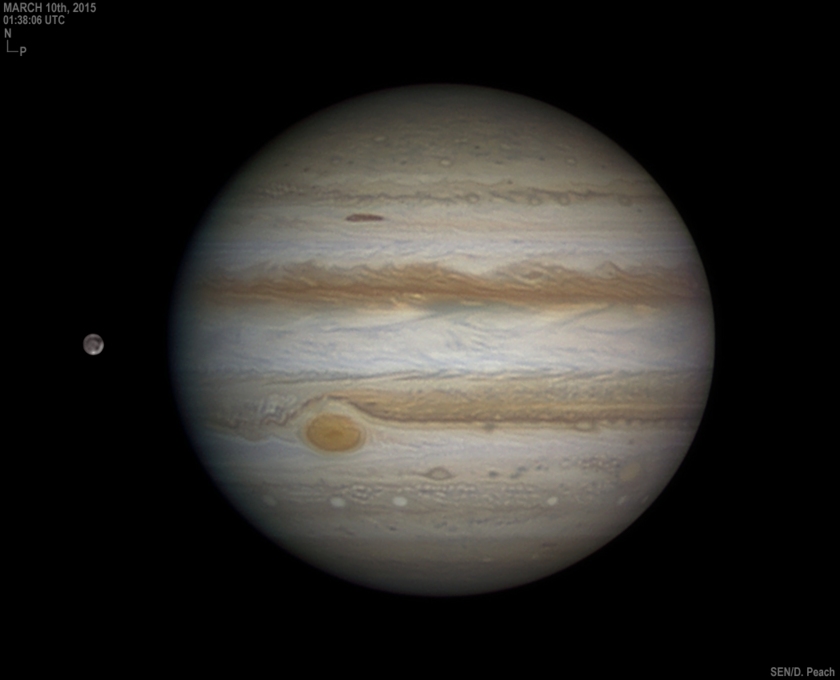 Amateur astronomers like Peach make valuable contributions to Jupiter science, monitoring the planet with much higher temporal frequency than professional astronomers can. Amateur astrophotographers contribute their work to a public database called the Planetary Virtual Observatory and Laboratory; professionals mine that database for time-series of photos that show them how belts and storms are behaving, and help them predict their future behavior and paths. The contributions of amateurs will be crucial for the Juno mission, which will be using Junocam to take high-resolution photos of Jupiter's atmosphere around its closest approach to the planet. Junocam mission planners will rely upon amateur astronomers' monitoring of Jupiter's clouds to help them choose where to target these high-resolution photos.

Damian Peach's images are absolutely stunning. Look back thirty years - I do not believe that professionals were capturing this level of detail at that time.

I haven't been following closely over the years: are the white spots in the band to the south of the GRS related at all to the impacts of Shoemaker-Levy 9, or do they predate it?

@eyelessgame. No they predate SL9. I did some work with Andy Ingersoll at Caltech about 12 years ago that indicated that the white ovals might be related to the fact that there is a really strong jet just north of them.

Incredible - I had no idea you could take such detailed images these days. From what I could find he's using a Celestron 14" for these?