Plots Are Boring Challenge: share your favourite astro plot and say why? Mine is the Chariklo transit - rings, baby! pic.twitter.com/MPpMRyaAiH

I've always loved a good scientific graph. I own three of Edward Tufte's books on the visual display of quantitative information. I have a particular fondness for graphs where a mass of points, each point representing one entity (one sample, one asteroid, one event), displays structure that emerges from the patterns of points' presence and absence on the plane.

So I picked one of these charts to use in a reply to Jessie. I know other scientists are attached to their graphs, too, so I challenged my followers to share their favorites with the hashtag #FaveAstroPlot on Twitter. I got dozens of replies and Storified them here. I understood some of the plots that were tweeted in reply, but found some impenetrable, and in most cases I knew that there was more to a plot than I could see myself. So I emailed a bunch of scientists to ask them about their plots -- what they say, and how they're used in the scientists' subfields. Almost everybody sent me back a blog-length reply! So this is the first in what will be a long series of posts about favorite plots in planetary science.

The plot that I chose compares two properties of the orbits of asteroids: the semimajor axis and the eccentricity. I downloaded my plots from the Minor Planet Center, which provides a variety of other kinds of plots of asteroid orbital characteristics and absolute magnitudes. 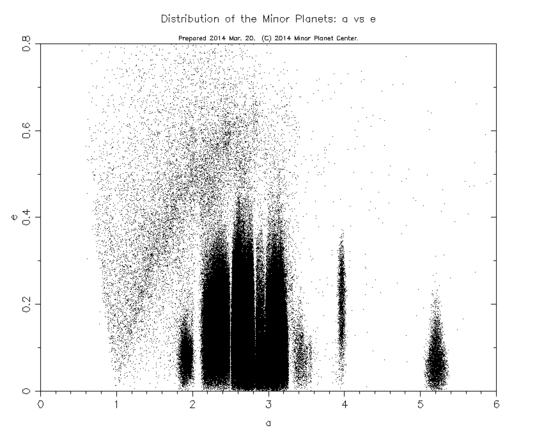 It gets even more interesting when you plot semimajor axis versus inclination. Inclination is the angle that an asteroid's orbit makes with respect to the plane of Earth's orbit. On this plot there are blobs of points sharing orbital distances and orbital inclinations, separated by voids with virtually no asteroids. 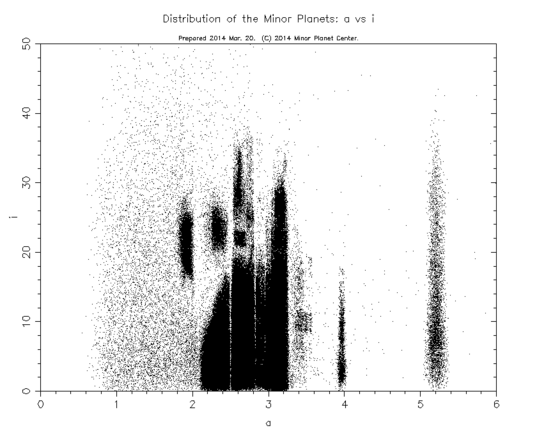 Many different phenomena contribute to the patterns of asteroid positions on these diagrams. The most important are:

Here, I've drawn in the prominent resonances in orange and labeled a couple of obvious families in red:

One more prominent "structure" appears on the semimajor-axis-versus-eccentricity diagram that turns out not to be a real feature of the asteroid population: a fan-shaped distribution of asteroids that begins on the X axis at 1 AU and then spreads out above it. This structure is composed of asteroids whose aphelion or perihelion is near Earth's orbit. I've sketched those boundaries in dark blue on the diagram: 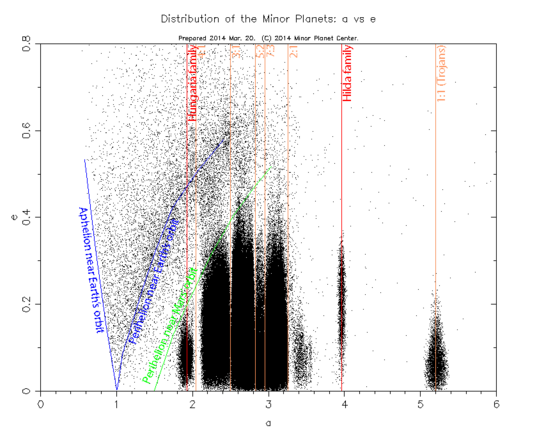 Observational artifacts in the orbital distribution of asteroids

It looks like there's an unusual number of asteroids on these orbits, but what's really happening is that there is an observational bias. These are mostly small, dim asteroids that wouldn't have been discovered except that they just happened to pass very close by Earth. Also, when there is a very short observational arc on a body -- common for faint objects that are discovered when they pass near Earth and then are never seen again -- orbit-solving software often begins with the assumption of an orbit with a perihelion of 1 AU. Asteroid astronomer Joe Maseiro showed me what happens when you take all the asteroids discovered as of May 2015 and plot semimajor axis versus eccentricity, then filter out those with very short observational arcs:

@elakdawalla Here's an example showing the difference if you cut at arc>30. Lots of the weird structures go away. pic.twitter.com/cX8gUkPhwY

The Minor Planet Center plots that I've used in this blog post don't include information on asteroid color. The Sloan Digital Sky Survey captured colors for many asteroids. As part of his dissertation work, Alex Parker took 88,000 of those asteroid colors and combined that information with their orbital characteristics to produce these eye-popping plots:

Jake VanderPlas wrote a nice explainer of these colorful plots for Scientific American. The bright green splat near 2.3 AU represents the V-type asteroids: Vesta and all its fragments. The magenta blob at 3.0 AU is the Eos family. And so on. You can read Alex's paper to see how color helps split out families (and then what you can learn about those families once you've used colors to help identify which asteroids belong to them).

It would be fun to think about other, different ways you could show asteroids on plots like these. Maybe a contour plot showing number density? Or some way to indicate the distribution of mass? or albedo? or discovery date? Each variation would tell a slightly different story. Plots are fun!

Over the coming months I'll share many other "favorite astro plots" with you, some of the explanations written by me, but most written by scientists. If you're a scientist and you have a favorite plot that you'd like to explain, send me an email!

Very interesting! I've seen these plots before, but never with so much explanation. What I'd like to see added to them, however, is a measure of mass. When we look at it, we see black blobs representing many many bodies in similar orbits, but we have no way of evaluating exactly how much stuff is there. Maybe if dots had transparency related to their mass, so it added up.

I assume both e and i can be taken as proxies for how energetic ("hot") a population is? I.e. my guess is that a body that would have been "cooled" by friction (say, by tidal forces) would tend towards a circular orbit in the planetary plane.