DPS 2015: A little science from Rosetta, beyond perihelion

Since I wasn't able to attend the European Planetary Science Congress last month, the Division for Planetary Sciences meeting was my first opportunity to see science results from the Rosetta mission since comet Churyumov-Gerasimenko passed through perihelion on August 13. Here are my scattered notes from DPS sessions on Rosetta:

Martin Paetzold updated the basic physical properties of the comet. The mass -- about 10 billion tons (or a GM of 666.2 ± 0.2m3/s2) -- is the smallest ever determined through radio tracking. Now that sunlight has arrived to the previously winter-dark south pole of the comet, there are updated shape models, and the total volume of the comet has decreased by about 10% from what was reported in the first science papers. Mass and volume give you density: 533 ± 6 kg/m3. That's half the density of water ice, but we know that the comet contains at least some silicate material. With a bit of modeling, Paetzold concluded that the comet's porosity is a huge 72%. So then the next question is: are there gigantic caverns within the comet, or is the porosity an intrinsic property of cometary material? With several measurements of the gravity field complete, Paetzold concluded the latter: the comet seems to be homogeneously dense in its interior, and its ice and dust seem to be put together in a form that has lots and lots of open pores.

Anne-Thérèse Auger showed a lot of beautiful images of the comet's cracked surface. All over the comet, there are terrains that are full of polygonal cracks. Here are a few examples from the Rosetta blog: 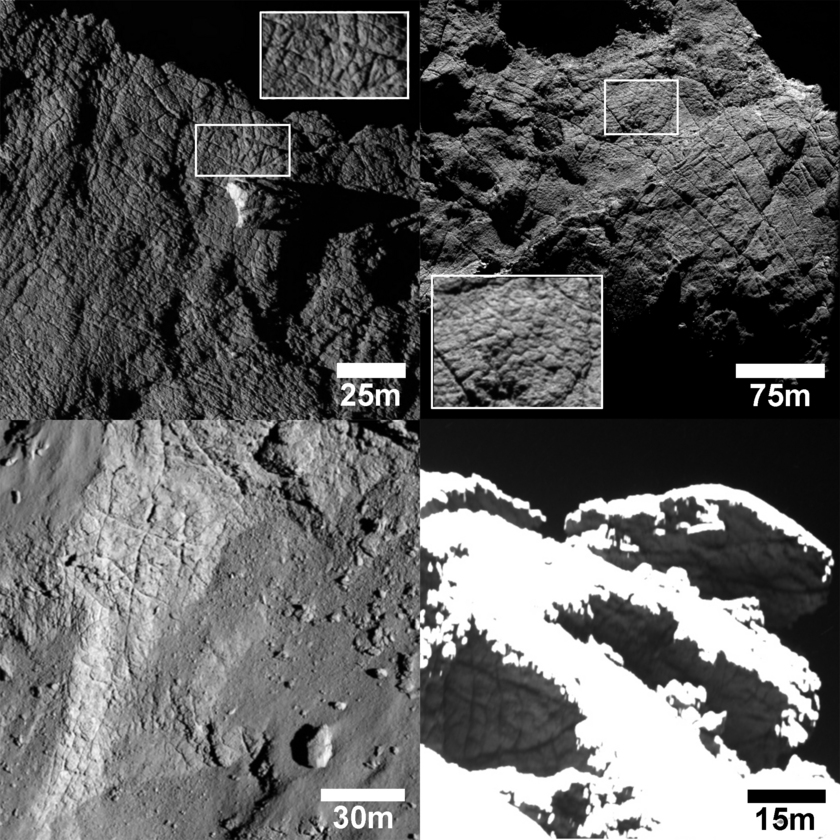 The top left image shows polygonal fractures on the edge of the Apis region, on the comet large lobe. The zoomed-in insert shows that the patterns are composed of irregular 2–5 meters-wide polygons. The top right image shows a pervasively fractured region at the edge of the Atum region, close to the comet's neck. Fractures vary greatly in length, with the longest visible one measuring about 250 m. Within this irregular pattern, a more regular pattern of 2–6 m-wide polygons is also visible, as shown in the insert. The bottom left image shows a regular patterns of fractures at the edge of the Nut region, a narrow, elongated depression on the small comet lobe. Patterns of 15 m-wide polygons with orthogonal fracture intersections are also visible. The bottom right image shows polygonal patterns on the edge the ridge separating the Anubis/Atum regions from Ash and Seth, on the large comet lobe The image has been overexposed to highlight the shadowed features, and smaller polygons with sizes of 2–5 m are also visible.

Her team measured the sizes of 6300 polygons across the comet, and found them to be most commonly 3 meters across. She discussed a possible origin by thermal cracking.

Before I go on, I should include a map of the named geomorphic regions on comet Chuyrumov-Gerasimenko: 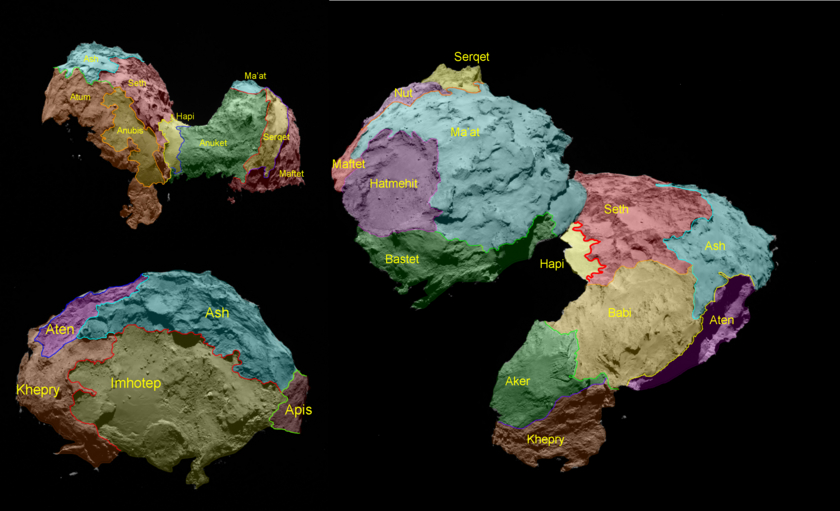 Olivier Groussin gave a really cool presentation on the changes his team has been observing all over the comet as it has passed through perihelion. He said they've observed changes in seven regions: Hapi, Anubis, Imhotep, Ash, Ma'at, Babi, and Anhur. The character of the changes is different from place to place. In Ash, he showed mass wasting (landsliding). In Anhur, he showed bright (presumably icy) patches that were there in May 2015, and had disappeared by June. In Ma'at, he showed a weird "honeycomb" terrain that appeared between September 2014 and March 2015. He saw scarp retreat in Hapi, but the most dramatic changes are in Imhotep. At some times, the average rate of scarp retreat was a few centimeters per hour. "You would be able to track them live," he said. Here are some photos of the changes in Imhotep:

Sequence of ten images showing changes in the Imhotep region on Comet 67P/Churyumov-Gerasimenko between May 24 and July 11, 2015.

Groussin pointed out that the large boulders that pepper Imhotep seem unaffected by the scarp retreating around them; "they must be made of devolatilized material," he said. "But 60 to 80 percent of the smooth terrain has been renovated" by surface changes. It's not surprising to observe surface changes on a comet (though it is fun), but the rate of change is surprising and demands some creative thinking about what mechanism could be driving it.

Sonia Fornasier showed some really stunning color images of the entire comet. I didn't find any of those photos online. Seen in natural color, it's pretty uniformly brown, but when she showed enhanced color images (like this one) you can see it's bluer in active regions, redder in dustier regions. The bright regions that Groussin had shown in Anhur, Fornasier showed to be 6 to 8 times brighter than the surrounding material, and also bluer; spectral modeling suggested a water ice abundance of 30 to 40 percent. For me, the coolest part of her presentation came when she showed how the comet's color has changed as it passed through perihelion, becoming bluer. They even saw color variations on hourly time scales; frosts disappear within 40 minutes after sunrise, and seem to recondense shortly after sunset. Just amazing. I can't wait to get a chance to play with those pictures....

Gianrico Filacchione performed a similar analysis with VIRTIS data. He showed that the comet is not only getting bluer, but distinctly brighter.

There were several more updates on coma composition, and really cool images from the COSIMA team of their fluffy comet particles.

I thought it was a good session, but it's still quite a bit early in the mission for much more than descriptive science. The science from Rosetta will become much better in a little while when researchers begin to be able to look at more than one data set at a time to address scientific questions. The OSIRIS and VIRTIS data will be multiplied in power when it can be combined. It's clear that this is an especially hard task for Rosetta because of the rapid changes on the comet. They not only have to deal with data varying across two spatial dimensions and a third spectral dimension, but also a fourth, temporal dimension. Even the topography is affected by rapid changes! It's difficult work to wrestle with all of that data -- but fun! I look forward to having the opportunity to play with it myself, someday, particularly when the OSIRIS data set becomes public. I look forward to public release of the post-arrival COSIMA images, too.

There has been a slew of Rosetta publications recently, including an entire issue of Astronomy & Astrophysics devoted to the pre-perihelion observations; many of the articles therein are free to read. They're academic papers, but many of them have good pictures. (They would be better pictures if they were not downsampled and JPEG-compressed, but at this point I'm grateful for OSIRIS images in any condition.) I particularly recommend:

And as always, watch the ESA Rosetta blog!

The dumb thing is, I made the same mistake in a tweet about it! Fixed.