In a remarkable and wholly unexpected gift to Curiosity fans, the rover has just taken the first-ever color Mastcam self-portrait from Mars. To date, all of Curiosity's previous self-portraits have been taken with MAHLI, the camera at the end of the robotic arm. Mastcam is also capable of imaging the rover, but has always avoided the rover deck, except for isolated images taken to document the condition of instruments located on the deck. With Curiosity's arrival at the lee side of an active Martian sand dune, there is finally a scientific reason to include the deck in a Mastcam panorama: to look for grains of sand that have blown onto the rover from the dune. This panorama is part of a "before" observation; they'll take more images (of a more limited area) as one or more "after" observations. 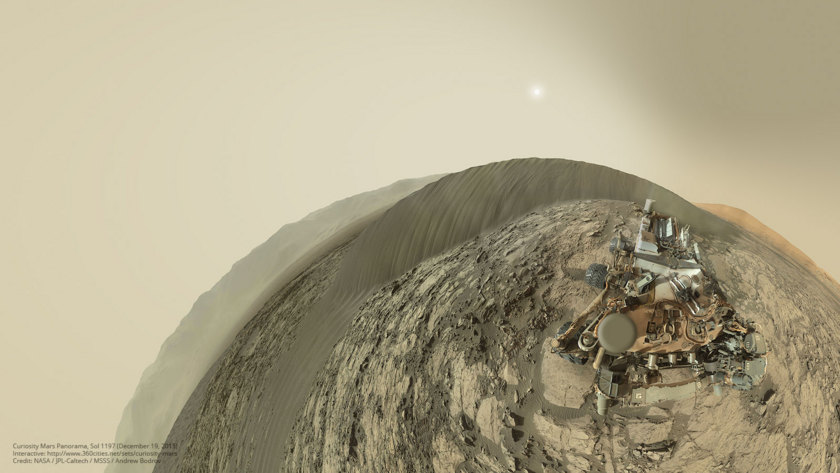 Curiosity took the photos for this panorama shortly after arriving at the lee face of Namib dune, on sol 1197 (December 19, 2015). For the first time since landing on Mars, the panorama taken by the rover's left Mastcam includes the entire deck of the rover, permitting a rover self-portrait. Since Mastcam is on the mast, the self-portrait does not include the rover mast, but, unlike previous self-portraits taken with the MAHLI camera, it does contain the arm. The deck was included to look for sand grains that may have been carried onto the deck of the rover from the sand dune. For a 360-degree virtual reality version of this panorama, visit Andrew Bodrov's 360cities page.

Other amateurs are also taking up the challenge; here's a nice hemispherical version from Elisabetta Bonora & Marco Faccin.

Here, I've collaged thumbnails of all of the individual images that include rover hardware, so you can see just how many frames it took to cover the whole thing. Near the horizon, it takes 30 individual Mastcam frames to cover the full 360 degrees around the rover; they can use fewer as they go downward in elevation, but it still takes a lot of frames to cover the hemisphere.

Looking closely at the images, the deck is noticeably dusty, but I find it fascinating how nonuniform the dust distribution is. The cups that acted as lens caps for the cameras during landing (when the rover mast was folded down to the deck) are fairly uniformly filled with dust. The front end of the rover is very, very, very dusty. Yet the center of the deck is relatively dust free. It's very odd. It's sort of sad that one of the dustiest spots on the rover is the bit of elevated deck that carries the calibration target for the Mastcams -- it's so covered with dust now, I wonder how useful it is.

Curiosity took a Mastcam panorama of its own deck on sol 1197 (December 19, 2015). The deck shows interesting patterns of heavily dusty and windswept areas.

Here is what Curiosity panoramas typically look like, avoiding the rover except for its right-side wheels, which are worth imaging for engineering purposes. Until now, the mission hasn't had a science or engineering justification to take a complete deck panorama, but as the MAHLI self-portraits show, public outreach can be an effective enough reason! I'm very, very glad they finally took one. Thanks to the Mastcam team for the cool rover self-portrait! I wonder if we can insert the data into past rover panoramas to make them appear more complete....

While awaiting a decision on whether to cross the dune at Dingo Gap, Curiosity captured a 360-degree view of the dramatic landscape.

As always awesome work. Thanks.