A couple of weeks ago, there was a flurry of rumor that ISRO was ready to announce some results from its Mars Orbiter Mission's methane sensor. The Indian space agency held a press event for the one-year-in-orbit anniversary of Mars Orbiter Mission, but did not unveil any new scientific results. The rumors -- and the fact that they were untrue -- sparked conversation in India about the lack of science results from the mission. The remarks of ISRO officials quoted in news reports suggest that they're responding to concerns of peer reviewers, or that they're still working on the calibration of their data, or some combination of the two. Calibration would be extremely important for a marginal detection or statement about nondetection for something as controversial as methane, so while I'm sorry not to be seeing science results, I'm more glad not to be seeing sensational results that turn out to be wrong later because the calibration or analysis wasn't right. Here are a few reports quoting ISRO officials:

One interesting tidbit from those stories: ISRO Chariman A. S. Kiran Kumar is quoted as saying that Mars Orbiter Mission will be taken to a lower periapsis toward the end of its expected life, which will sharpen the detail of the data they can capture from orbit.

At present ISRO has an Announcement of Opportunity open to encourage foreign scientists to apply to work with proprietary data. The deadline is October 10. Foreign participation would be beneficial, because it would lead to more international confidence in any results from the mission about Mars' atmosphere. EDIT: It's been pointed out to me that the Announcement of Opportunity is open only to "scientists [and] academicians belonging to recognized institutions, universities and government organizations of India." 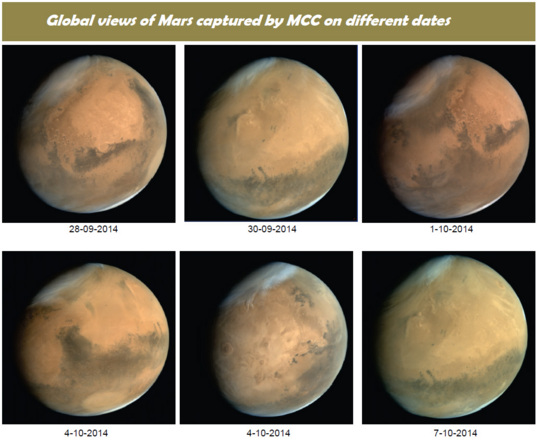 At the press event, they unveiled a book written about the images from the Mars Orbiter Mission, which you can download in PDF form here. It's cool to see so many pictures from the spacecraft; I look forward to a release of the actual image data that the public can play with. (The images in the PDF are not at full resolution, and the PDF is locked to make it difficult to export images; you can't even use the Snapshot tool in Acrobat, you can only take screen captures.) The book reminds me a lot of the special publications that NASA issued in the 1970s and 1980s following the Mariner and Viking orbiter missions to Mars, picture books with large photos and captions describing the landscapes visible in each one.

The Times of India article contained a few facts about the Mars Orbiter Mission camera that I hadn't heard before:

The only thing [ISRO chairman] Kiran was willing to specify was that the Mars Colour Camera (MCC) — which has taken some breathtaking images of the Red Planet — is capable of taking only four pictures during one orbit of Mars by MOM.

"It takes about 3.2 days for MOM to complete an orbit. And during each orbit, MSM is capable of taking four pictures," he said.

I do want to point out that there's an inconsistency in the quote -- Kiran is quoted as saying that MSM (which is the methane sensor) is capable of taking only four pictures per orbit, while the article's author is speaking about MCC (the Mars Color Camera). I don't know whether "MSM" is a mistranscription by the journalist or misstatement by Kumar or if the writer has confused MSM with MCC, and it's the methane sensor that can only take four pictures. But based on the design of the MSM instrument I don't think you would use "pictures" to describe MSM data, so I'm inclined to think it's just an error and the quote from Kiran does refer to the camera.

I have hoped that Mars Orbiter Mission would continue to return photos of a global Mars in a variety of phases, because one-shot global views of Mars at 2k resolution simply aren't available from any other instrument, past or present. That's a totally unique contribution that Mars Orbiter Mission could make to the Mars community. But it seems they have not been taking such photos. The 6 global views I posted above were all taken within a 10-day period, between September 28 and October 7, 2014, and consequently they all show Mars at the same phase. I'll confess to being disappointed about that limited global-image data set. My other hope for Mars Orbiter Mission images has been that, from their uniquely elongated orbit, they could do a more thorough survey of the anti-Mars face of Deimos than has ever been done before. They have already taken some photos from a very low phase which are good for seeing color but bad for topography; I'm still hoping we'll see more Deimos imaging with Deimos at higher phases to help highlight topography.

Agree with you Emily. Knowing well India, and that the MoM news were posted Inside the biggest Indian national newspaper, the "456" figure is probably real, otherwise ISRO would have asked the India Times for typo correction or info clarification

I thought your comment that as an engineering "demonstration (it) is a smashing success" and your criticism that they are still being secretive (cautious) about its achievements is spot on.