Hayabusa2's target asteroid has a name!

JAXA announced today the results of the naming contest for Hayabusa2. The target of the sample-return mission, formerly known as 1999 JU3 and still numbered 162173, is now named 162173 Ryugu.

Asteroid 1999 JU3, a target of the Asteroid Explorer “Hayabusa2,” was named “Ryugu”. One major reason for the selection was that, in the Japanese ancient story “Urashima Taro”, the main character, Taro Urashima, brought back a casket from the Dragon’s palace, or the “Ryugu” Castle, at the bottom of the ocean, and the theme of “bringing back a treasure” is common as the Hayabusa2 will also bring back a capsule with samples. It was selected among 7,336 entries. Thank you very much to so many of you who took part in the naming campaign.

I wonder how a peregrine falcon finds its way to the bottom of the ocean to visit Ryugu castle? I foresee some entertaining fan fiction!

The mission is proceeding well; it successfully performed an "additional ion engine operation" on September 1 and 2 to fine-tune its trajectory for its planned Earth flyby in December. The Earth flyby will send it onward to a mid-2018 rendezvous with Ryugu. 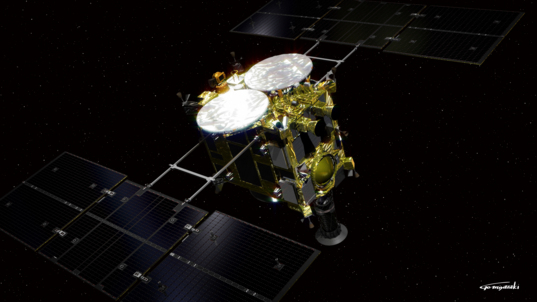 It's not so rare at all in Japan to hear or use such an expression as 大海原 (pronunciation : o-o una bara) for space, which I think most people agree to translate as "vast ocean". Like 宇宙の大海原 (pronunciation : uchu-u no o-o una bara), which I think most people agree to translate as "vast ocean of space". But I think Japanese people who know this expression don't think that space is filled with liquid water. (Hope Japanese language I typed appears in fine fashion.) So it might be slightly easier or more natural for them than other people to connect Hayabusa2 with a castle in the bottom of the sea. Additionally, of course the story of Urashima Taro (浦島太郎) is not an actual story. I think it's in a category of legend or fairytale. Although I don't know the very very details of the story and I'm no expert of this category, I think the story has some variations, depending upon who have passed this. And at least some of them say this interesting feature: As Taro returned his home from Ryugu with a treasure box, it was many many years (it seems some say hundreds of years) later since when he left, so there's no one he knows.... (Was his "vehicle" moved so fast???) Hope someone who know this story very well correct this, if something I wrote is incorrect.

I know that NASA has some pretty rigorous planetary protection protocols, but is there any sort of international agreement in place so other countries are also living up to those standards? I'm not particularly worried about an Andromeda Strain situation, but I am curious to know how much of the standards NASA holds are unique to NASA or if they are universally agreed upon.