A terrific new visualization tool for comet 67/P Churyumov-Gerasimenko demonstrates the value of sharing mission image data with the public. The browser-based tool lets you spin a simulated 3D view of the comet and change lighting conditions to simulate Rosetta's view, helping users understand the perspective of Rosetta images. It displays mapped geomorphic regions, making the complicated geography of the two-lobed world easier to understand. It shows the locations from which Rosetta snapped photos, linking them to the actual NavCam data. And it began with a 3D model of the comet created not by ESA, but by a space enthusiast, Mattias Malmer. 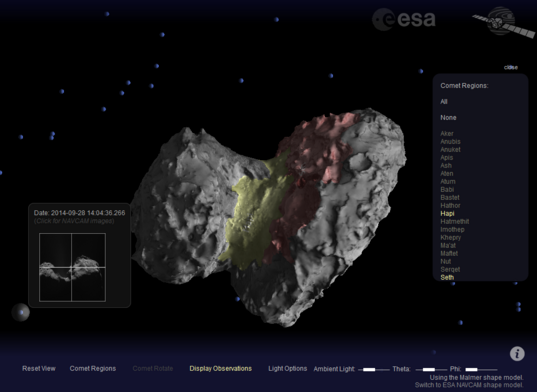 Planetary Society blog readers are familiar with the work of Swedish space fan Mattias Malmer, who has been working on a shape model of the comet using public NavCam and OSIRIS images. Malmer started with the images that were released on the ESA blog, and later added the science data (NavCam only, so far) that were formally released through the ESA Archive Image Browser.

Malmer's shape model provided the basis for the visualization tool, as explained at the Rosetta blog by by Karen O'Flaherty:

As far back as August last year, when the unusual shape of this comet became clear, we saw the need for an interactive way of exploring the surface of the comet. More recently, we started to wonder about what could be done with the Rosetta images and 3D computer models of the shape of the comet.

A conversation that started on a Friday evening as a "Wouldn’t it be great if we had an interactive way to view the comet?" set our colleague Oliver Jennrich thinking, and by the following Monday morning he had come up with a simple prototype tool using a shape model that had been developed by Mattias Malmer an image processing expert and space enthusiast living in Sweden. Mattias used publicly available NAVCAM images to generate his model and then made it available via his own website.

With this basic tool, it was possible to zoom in and out, and rotate and pan across the comet. This was already better than anything we had in the Rosetta communications team, but as soon as we starting playing with it more ideas started to flow.

Could we add the geological regions that have been identified on the comet's surface? Could we tie this tool in with the huge repository of NAVCAM images in the Archive Image Browser? Could we include other shape models?

Over the next few weeks, Oliver implemented a number of new features, including a texture map made by Mattias to add the regions identified by Nicolas Thomas and colleagues in their scientific analysis of 67P/C-G.

I think this is a wonderful example of how space enthusiasts can make significant contributions to space exploration when missions share data. Information doesn't just flow one way, from space agencies to the public; it can be enriched by the public and flow back into missions. I've seen this operate before with the Mars rovers, where enthusiasts like Mike Howard and Joe Knapp have developed tools that people working on the mission can use to rapidly, casually check on rover operational progress without logging in to work computer systems.

I'm also very pleased that ESA has reaped this reward from public data release so soon after first announcing its release of NavCam images with Creative Commons licensing. Could they have done it without Malmer's work? Sure, if they wanted to. In fact, the browser has two shape models, one Malmer's and one developed and released later by the ESA Flight Dynamics team. But it was easier and faster -- and therefore, also, cheaper -- because of Malmer's work. I hope that ESA's leaders take note of this obvious benefit of sharing data with the public, and work to develop better agreements with future mission camera teams that will see more rapid release of ESA missions' science image data than we currently enjoy. Thanks to ESA for the public release of so much NavCam data, thanks to Mattias for your hours and hours of volunteer time and generosity in sharing the results with the world.

I often describe mission image data as "treasure." But in an era of open data, treasure is not an apt metaphor, because treasure, by definition, is something rare of value only to the person who possesses it. When space images are shared openly, everyone can possess them, and the data become more and more valuable as people work their creative powers on it. I need a new metaphor.

The mission is still generating new data, of course. Churyumov-Gerasimenko passed through perihelion today, and Rosetta is there to watch the fireworks. I can't wait to see what people make of these latest pictures once they hit the Rosetta image archive. Right now, you can use the comet viewer to try to figure out where that enormous jet came from!

This series of images of Comet 67P/Churyumov–Gerasimenko was captured by Rosetta’s OSIRIS narrow-angle camera on 12 August 2015, just a few hours before the comet reached the closest point to the Sun along its 6.5-year orbit, or perihelion. The images were taken from a distance of about 330 km from the comet. The comet’s activity, at its peak intensity around perihelion and in the weeks that follow, is clearly visible in these spectacular images.

Hi All Using ESA's Comet Viewer enables me to create some rather convincing anaglyph images :) (Similar to the one's I created way back in 2010, of Apollo landing sites, using LROC images)... but do you know if there will be a 3D (red/cyan) option added to the interface any time?? Thanks Nathanial

Interesting development. Re metaphors, UN has solved their problem with announcing "world heritages". [ http://whc.unesco.org/en/list/ ] That would work, or using their template, "world treasures".