Three mission updates: Trouble for Dawn at Ceres; A new plan for Juno; OSIRIS-REx coming together

With all the focus on Pluto it's hard to keep up with all the other space missions currently exploring other planets. Thanks to space enthusiast Olaf Frohn, we can take in all the space exploration activity at a glance: 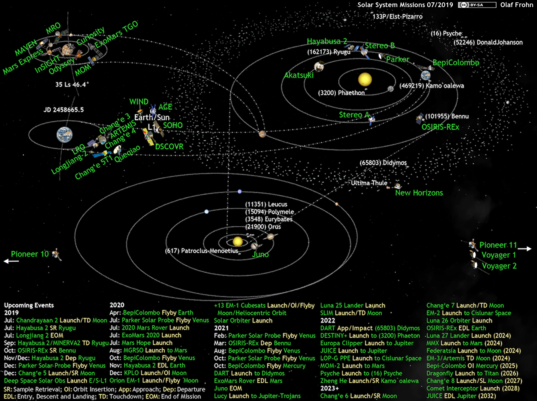 There has been recent news on three missions (one doing science, one cruising, and one under development): Dawn, Juno, and OSIRIS-REx.

The Dawn mission issued a dreaded "status report" on July 6. I say "dreaded" because whenever the words "status report" appear in a JPL news release, the news is almost always about a spacecraft anomaly of one kind or another. Indeed, it was an anomaly:

NASA's Dawn spacecraft is healthy and stable, after experiencing an anomaly in the system that controls its orientation. It is still in its second mapping orbit 2,700 miles (4,400 kilometers) above dwarf planet Ceres.

On June 30, shortly after turning on its ion engine to begin the gradual spiral down to the next mapping orbit, its protective software detected the anomaly. Dawn responded as designed by stopping all activities (including thrusting), reconfiguring its systems to safe mode and transmitting a radio signal to request further instructions. On July 1 and 2, engineers made configuration changes needed to return the spacecraft to its normal operating mode. The spacecraft is out of safe mode, using the main antenna to communicate with Earth.

Dawn will remain at its current orbital altitude until the operations team has completed an analysis of what occurred and has updated the flight plan.

Because of the versatility of Dawn's ion propulsion system and the flexibility of the mission's plan for exploring Ceres, there is no special "window" for starting or completing the spiral to the third mapping orbit. The plans for the third and fourth mapping orbits can be shifted to new dates without significant changes in objectives or productivity.

The wording of this statement is a little bit ambiguous, because Dawn has already lost the use of two of its four reaction wheels, and as a result there is not one but actually two systems that work together to control its orientation: the two remaining reaction wheels and its hydrazine attitude control thrusters. So either there is a problem with one of the remaining reaction wheels (which wouldn't be too surprising at this point, nor does it jeopardize the completion of the mission, but it would be an inconvenience) or there is a problem with its thrusters (which would be much worse news). The fact that it is out of safe mode and "using the main antenna to communicate with Earth" means that they do have three-axis control of the spacecraft, which makes me inclined to think that it's another reaction wheel problem. Dawn is fully capable of completing its science mission at Ceres using only thrusters to control its orientation in space, so if this is a serious reaction wheel problem and not just a brief glitch, the mission will be just fine.

A New Plan for Juno

As of July 4, Juno has only one year of cruising left before its arrival in Jupiter orbit. That's not long, but it's apparently time enough to redesign the orbital plan for the mission, something that JPL announced on July 7. Here is the heart of the update:

Following a detailed analysis by the Juno team, NASA recently approved changes to the mission's flight plan at Jupiter. Instead of taking 11 days to orbit the planet, Juno will now complete one revolution every 14 days. The difference in orbit period will be accomplished by having Juno execute a slightly shorter engine burn than originally planned.

The revised cadence will allow Juno to build maps of the planet's magnetic and gravity fields in a way that will provide a global look at the planet earlier in the mission than the original plan. Over successive orbits, Juno will build a virtual web around Jupiter, making its gravity and magnetic field maps as it passes over different longitudes from north to south. The original plan would have required 15 orbits to map these forces globally, with 15 more orbits filling in gaps to make the map complete. In the revised plan, Juno will get very basic mapping coverage in just eight orbits. A new level of detail will be added with each successive doubling of the number, at 16 and 32 orbits.

The slightly longer orbit also will provide a few extra days between close approaches to the planet for the team to react to unexpected conditions the spacecraft might experience in the complex environment very close to Jupiter.

"We have models that tell us what to expect, but the fact is that Juno is going to be immersed in a strong and variable magnetic field and hazardous radiation, and it will get closer to the planet than any previous orbiting spacecraft," said Bolton. "Juno's experience could be different than what our models predict -- that's part of what makes space exploration so exciting."

The revised plan lengthens Juno's mission at Jupiter to 20 months instead of the original 15, and the spacecraft will now complete 32 orbits instead of 30. But the extra time doesn't represent bonus science for the mission -- rather, it's an effect of the longer orbital period and the change in the way Juno builds its web around Jupiter. Basically, it will take Juno a bit longer to collect the full data set the mission is after, but it will get a low-resolution version of its final products earlier in the mission than originally planned.

It's not like the harsh radiation environment at Jupiter is news to anyone involved in outer planet exploration, and Juno was designed to cope with it; but no spacecraft has ever performed the kind of close-in orbital tour of Jupiter that Juno will do. Because of that, I know JPL has been hard at work trying to improve predictions of what exactly Juno is going to encounter and what effect the environment will have on its specific systems. Reading between the lines of this mission update, it sounds like some of this work has made them more concerned about radiation's effects on the spacecraft than they were before, so they're lengthening the orbit (to give them more time to deal with anomalies caused by adverse events) and mitigating science risk by building up a quick-look data set earlier than they originally planned.

For Juno, while I'm interested in its science goals of understanding Jupiter's deep interior, I know that public excitement will center on its Junocam. As an education project, Junocam was not required to cope with the same level of radiation damage as the science instruments; according to the Malin Space Science Systems website, it is expected to survive seven orbits, give or take. I'm not sure whether the change to the orbital plan (or the change in understanding of Jupiter's radiation environment that led to the change in the orbital plan) changes the number of orbits Junocam is expected to survive.

In the last couple of weeks, two of OSIRIS-REx's five science instruments were delivered to Lockheed Martin for integration with the spacecraft. There is still much work to do to prepare for the September 2016 launch, but the spacecraft is beginning to come together.

The first OSIRIS-REx instrument to arrive was the Thermal Emission Spectrometer (OTES), which will map the temperatures on the asteroid surface. Principal Investigator Phil Christensen, from Arizona State University, has built the same types of instruments for Mars orbiters and rovers; a TES on Mars Global Surveyor provided the first global mineral maps for Mars. With OTES he's venturing beyond Mars to asteroids; and his instrument proposal was just selected for a related type of instrument on the Europa mission. Watch out, solar system: Phil Christensen is broadening his empire!

The first of five instruments has been delivered and is getting ready for installation! :) http://t.co/VcPGj38IxD pic.twitter.com/QYvFm7ISYW

The second OSIRIS-REx instrument to reach Lockheed was the OSIRIS-REx Visible and Infrared Spectrometer (OVIRS), developed at Goddard under the leadership of Dennis Reuter. Its colorful maps of Bennu will point to the presence or absence of minerals and water. An imaging spectrometer is a necessary component of the science packages of most missions to asteroids and outer planets.

The two updates also provided information on when we'd get the first data from these instruments. For OTES: "The instrument will be powered on shortly after the OSIRIS-REx spacecraft begins its two-year trip to Bennu. On arrival at Bennu, OTES will provide spectral data for global maps used to assess potential sample sites." And for OVIRS: " After thorough testing with the spacecraft on the ground, the instrument will be powered on for check-out shortly after launch, with first science data collected during the Earth gravity assist in September 2017."

The two "O" instrument names make me think that we're going to see the initial "O" as a meme on the OSIRIS-REx mission. Which reminds me of the original "O" meme:

What does Juno's new trajectory mean for observations of Jupiter's moons?

TinfoilHatBrigade says: a talon-winged alien entity has whooshed by first New Horizons and now Dawn, whispering into their diodes and rattling their confidence... PS's reporting here has brought me to the point where I experience the same leap across a heart beat or two whenever reading the word 'anomaly' as described...

Mewo: I don't think it makes much difference. Juno's observations of Jupiter's moons will be distant no matter what.

re. Dawn's reaction wheels - I asked Marc in a recent post when they will be activated, and he said LAMO where they will have the most benefit.

I forgot about the broken wheels. Safe modes are terrible for spacecraft in this state, and they burn hydrazine. They will want to be very sure they understand how to prevent those that occur from recurring.