More than 2000 Rosetta NavCam images for your enjoyment

Last week, the European Space Agency released the first set of images from Rosetta's navigational camera, or NavCam, from the phase of the mission that followed the Philae landing. That makes more than 3500 NavCam images that have been released from the comet phase of the mission. I haven't seen many people playing with the data from these image releases; I hope that people will take a break from refreshing the New Horizons image website to go check out the Rosetta NavCam data, because there's a lot of it, and every comet image contains wonders.

I posted about the NavCam releases covering the approach to the comet back in April. Since then, they have also released images taken during its close mapping phase in October and the Philae landing in November. The latest release includes data taken while Rosetta was using its OSIRIS camera to search for the missing lander in December. As just one example of the kinds of images you can make from these data, here is an unusual view of the comet as a thin crescent taken while Rosetta was on its "night excursion" around the comet back in September. 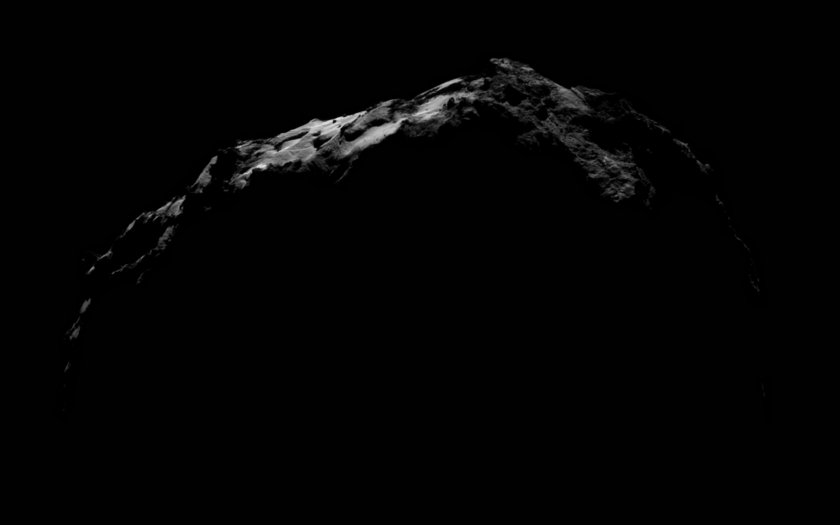 Rosetta took the images for this mosaic of comet 67P while on a "nightside excursion," an orbit that allowed it to view the comet from very high phase. The spacecraft was about 23.6 kilometers from the comet's center at the time.

The release of the NavCam data does serve as a reminder that there has not yet been any public release of data from any of Rosetta's science instruments since arrival at the comet. The first science data release was supposed to happen six months following the landing, in late May, and it did not. I'm not at all surprised by this, but I would love to know when the science teams do plan on sharing their data. We'll just have to wait and see.

Thank goodness for NavCam; it provides a treasure trove of images. Here are visual summaries of all the images that have been released since my last post on the archived NavCam data. The data releases are divided into planning periods. First, the images from Medium Term Plan 8, or September 23 to October 24, 2014. A timeline for this phase, from this Rosetta blog entry:

Thumbnails of all 809 Rosetta NavCam images taken during "Medium Term Plan 8", between September 23 and October 24, 2014, as the spacecraft circled the comet. During this period Rosetta performed its "night excursion", followed by close mapping observations from distances of 20 and then 10 kilometers. Download the full-resolution data at the Rosetta image browser.

Next, the images from Medium Term Plan 9, or October 24 to November 21, 2014. Lander delivery happened on November 12. It's fun to scan this set of images; it's not hard to recognize when the lander delivery and flyby happened! A timeline for this phase, from this Rosetta blog entry:

Thumbnails of all 967 Rosetta NavCam images taken during "Medium Term Plan 9", between October 24 and November 21, 2014, as the spacecraft performed maneuvers necessary to deliver Philae to the surface on November 12 and then listen for the lander's signal; ranges to the comet varied from 45 and 10 kilometers. Download the full-resolution data at the Rosetta image browser.

Finally, the images from Medium Term Plan 10, or November 22 to December 19, 2014. A timeline for this phase, from this Rosetta blog entry: 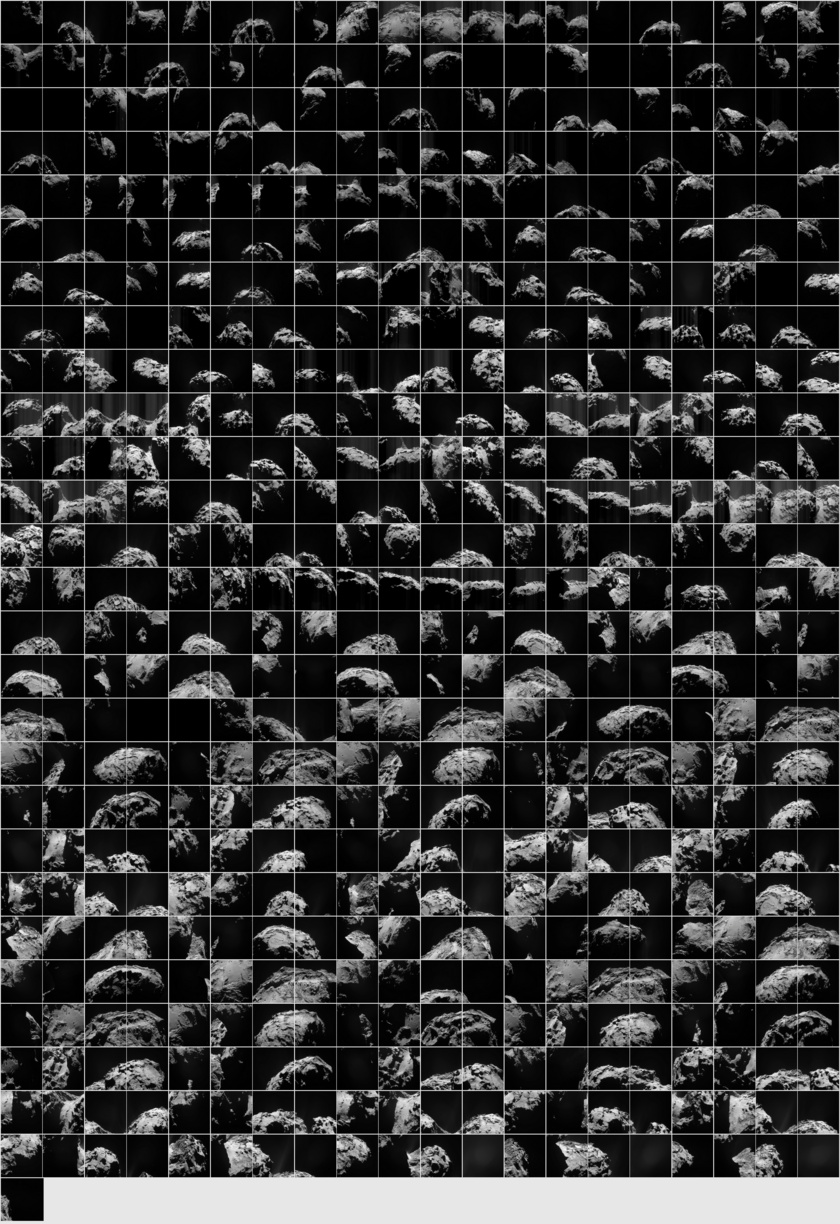 Thumbnails of all 541 Rosetta NavCam images taken during "Medium Term Plan 10", between November 22 and December 19, 2014, as the spacecraft circled the comet at ranges between 20 and 30 kilometers, using the OSIRIS camera to search for the Philae lander. Download the full-resolution data at the Rosetta image browser.

After this phase, Rosetta went on to perform two close flybys of the comet, which will make for really exciting images. I'm pasting in the upcoming timeline for those events here, in preparation for the next Rosetta Navcam image release, developed from three ESA blog entries: "Rosetta in 2015", "Close flyby navigation issues," and "New Trajectories for Rosetta."

I'm not sure when the next release will be, but it's going to be awesome!

This is good, I need some imagery to obsess over until new horizon's sends more lorri shots.