In a paper released in Geophysical Research Letters today, Eugene Shalygin and coauthors have announced the best evidence yet for current, active volcanism on Venus. The evidence comes from the Venus Monitoring Camera, which saw transient hot spots in four locations along a system of rifts near Venus' equator. They saw the hot spots in two distinct episodes in 2008 and 2009.

The press release describes the science pretty well, so I won't belabor that here; I thought I'd show you some pretty pictures of the region, made from Magellan data. Magellan obtained radar images of more than 97% of the planet, which have been merged into several enormous global data sets. To get the best-quality Magellan data you have to interact with an extremely klunky interface through the USGS, but it's well worth the effort. Here is the region in which Shalygin et al. report observing the hot spots. Click through twice to see it at its glorious full resolution. (Warning: 13 MB!) 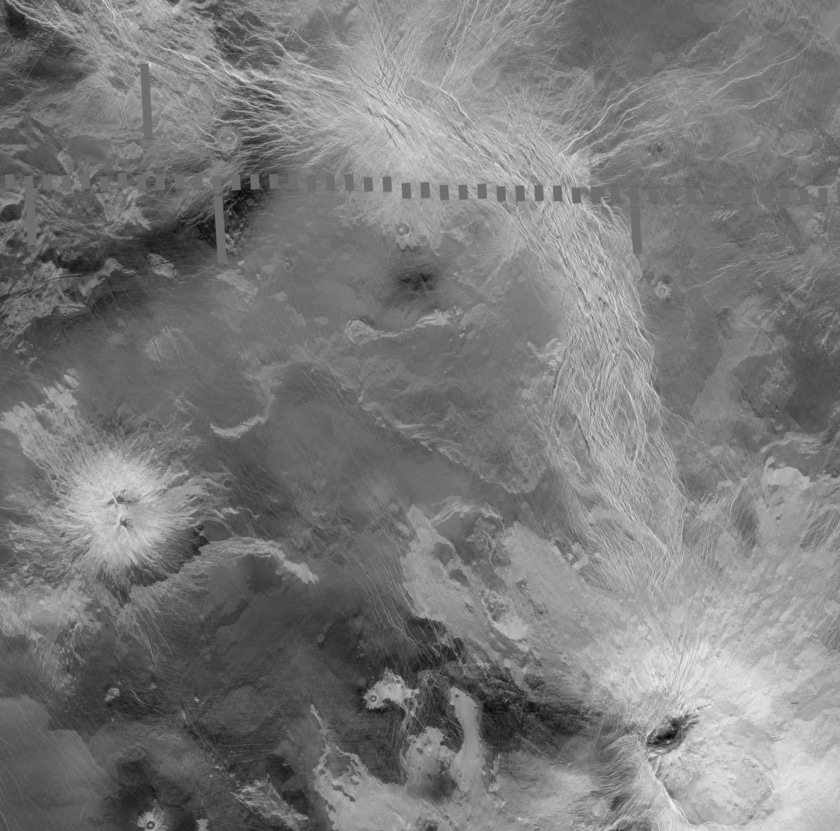 In 2008 and 2009, Venus Express saw transient hot spots in this region of Venus, a site near the equator called Ganis Chasma. There are enormous volcanoes in this area (Ozza Mons at lower right and Maat Mons at lower left) but the hot spots were along the fissures that cross the image from upper left to lower right. The whole region visible here is about 2000 kilometers square. This image is made from data from the Magellan mission, which ended in 1994.

Here, I've annotated the image with names of craters (yellow), mountains and chasmata (lighter and darker red), plains (blue), and the areas in which VMC saw hot spots (white). 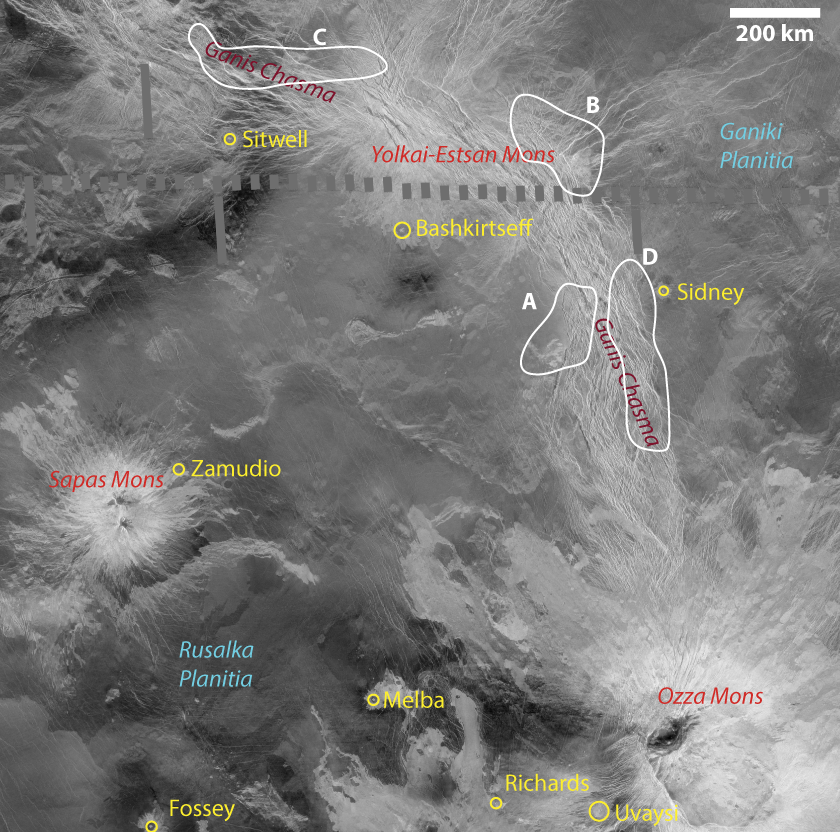 These areas were imaged hundreds of times by VMC, but the hot spots only appeared very briefly. Crucially, two of the hot spots appeared in more than one orbit right after the other -- so it wasn't just one spurious detection. From the supplemental information to the paper, here's what we know about the hot spots:

These are not quite "liquid hot magma" temperatures, but they're very close. If VMC was seeing the cooling surface of a lava flow, those temperatures would be very reasonable.

Do enlarge the top image by clicking through it twice to enjoy the beautiful diversity of the Venusian landscape. This area has it all: small shield volcanoes and gigantic volcanic constructs; wide spreading lava flows; impact craters, some of them filled by lava; a particularly fresh impact crater (Sitwell) with a dark parabola; and that system of fissures. Here is one zoom in on the region containing Shalygin's Objects A and D. I feel like I can almost make out landslides running down the chasm walls here. Magellan image resolution is always just short of what I really want to see the features I'm interested in. 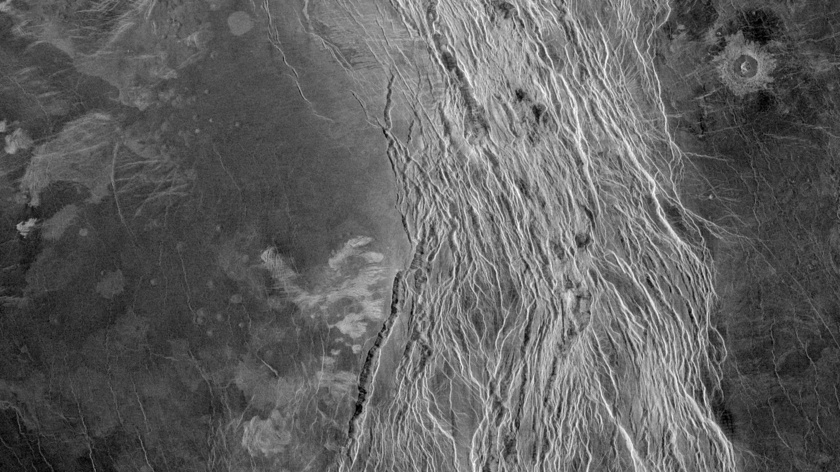 If those hot spots are fresh lava flows, whence did they emanate? Did lava fill any of these chasms? If we were to return a radar mission to Venus, would this area have visible changes? There's only one way to find out. Let's go back to Venus!

That's hotter than some types of lavas. Carbonatites are usually only 500-600°C, for example. Also, the concept of carbonatites being common on a world with such a CO2-rich atmosphere doesn't sound all that absurd...

although the Soviet Venera landers in the late 1970s and early 1980s only lasted about an hour each functioning on the surface of Venus they did get pictures. However have we or they not advanced significantly in at least 3 decades that we or they could make landers that would last somewhat longer. What I would like to see would be a lander on Venus that could take surface samples and analyze them for the chemical or mineral composition and isotope ratios. Could this be done with current technology and if so why aren't we trying to send such a probe and if not wouldn't it be a good thing to work more towards. Would knowing the minerals, molecules and isotope ratios of the surface material on Venus better determine Venus' history and the extent or likelihood of current volcanism on Venus and how much this could be reinforcing the sulfuric acid clouds in Venus and perhaps keeping it so hot and uninhabitable?

Hi Emily and others; I looked at my copy of David Grinspoon's excellent book Venus Revealed and on page 135 and 136 he has a bit about the Soviet Venera landers especially 13 and 14. There he says they did have the capability to dig in some of the surface and bring it on board and analyze and Venera 13 succeeded somewhat in this and determined some of the surface there had basaltic dust and sand. Were there any other details found of the material found there such as about the basalt and what other materials were found and any information about isotope ratios? Also I stand by the other material in my earlier post except to also say that if the Soviets could do some analysis of the Venusian surface in the 1980s shouldn't we be able to do this in a more detailed basis for longer with much more technology? I also heard that some of the dives of the ESA Venus Express deeper into its atmosphere was at least partly to determine future landing locations on Venus. Do you know if there have been any definite commitments by ESA, NASA the Russians or others to send another lander to Venus in the near future and if so when?