Pluto and Charon are growing larger in New Horizons' forward view, beginning to develop distinct personalities. Pluto: larger, brighter, but with dark splotches on its surface. Charon: smaller, dimmer, its features still hidden. Here's the very latest from the New Horizons raw image website: the best image ever taken of Pluto and Charon. 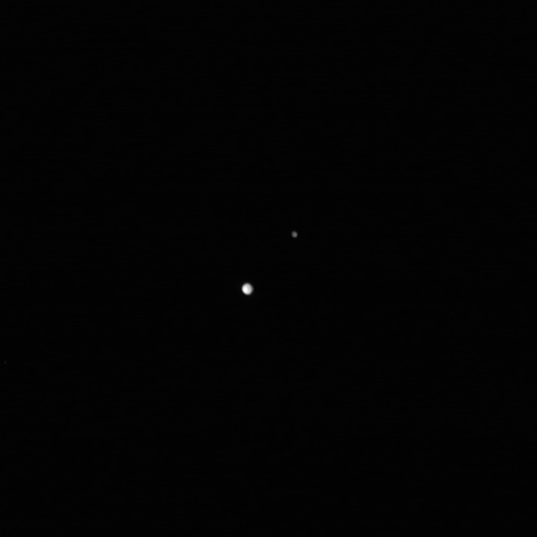 If you're an image processing magician like Björn Jónsson, you can take several images like these and stack and sharpen them to reveal more detail than can be perceived in any single photo. Björn took four images from June 6 and produced this. 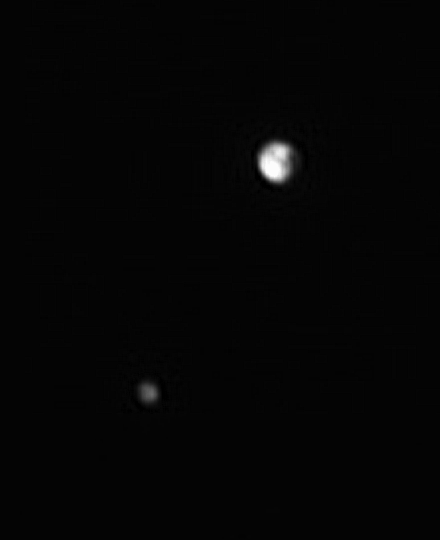 New Horizons captured the four images used to make this view on June 6, 2015 from a distance of 46 million kilometers. Four images have been stacked and sharpened. The dark line running across Pluto is likely a real feature, not a processing artifact. Charon is still too small for any apparent features to be definitively discerned.

See that diagonal line running across it? Björn is certain that it's an actual feature. Yay! Dark lines criscrossing a disk! It's the discovery of canali on Pluto! We have reached Schiaparelli-quality mapping of Pluto's surface!

I am not entirely joking when I evoke Martian canali here. Schiaparelli was one of the great astronomers of his day. Many of his peers also saw canali on Mars, including Percival Lowell, whose name graces the observatory that was used to discover Pluto. I find it fitting that the first new "feature" observable on Pluto is an enigmatic dark line, recapitulating the history of the exploration of Mars and Venus. Fortunately, we need only wait a few weeks more to learn whether the line is an artifact built by an alien civilization to transport valuable liquids across the Plutonian surface* -- or if it's something else entirely. My money is on the latter! 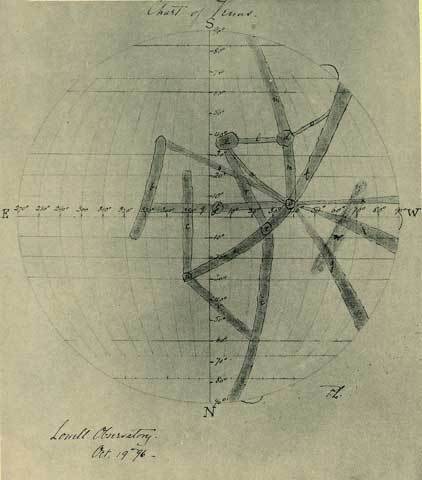 Via Sky and Telescope and Phil Stooke

Percival Lowell mapped Venus in 1896, observing the same kinds of canali on it that he saw on Mars.

* Just in case it's not painfully obvious: this is a joke!! I hate that I even have to write that, but this is the Internet, so....

Still no sign of cobwebs linking the two. (I would say the faint rings around each small world is an artefact.) It's worth mentioning that Schiaparelli was simply describing 'channels' on Mars' surface. Unfortunately, the Italian word 'canali' is very close to the English 'canal', which infers an artificial structure. Thus the legend of Barsoom was born.

The feature is from now on know as the "Björn canaille"! (In keeping with the tradition of bad translations)

That 2nd image gave me shivers... :) There are currently so many thrillers running here... We're actually beginning to *see* Pluto... !!! That line is clearly a dog-leg! On increasing approach we'll come to see the whole painting, left to spite us. 'You didn't take us seriously in South America? You don't want this to be a planet? You want it to be a dog? Very well...'

Yes Tony, lots of astronomers saw Schiaperelli's "canali" and that's all they were describing ...markings that were reminiscent of channels. Lowell made the (natural enough) mistake of mistranslating this word as "canals". The damage was done and he couldn't let go of the idea that they were artificial which made matters worse as he started to see them everywhere! Some of his drawings got so complicated and fanciful as he saw what he wanted to that it remains as a lesson in objectivity today. Bravo to all the New Horizons team and good luck for the fly-by... not long to go now :D

So, obvious question... which way is north in this image? And how does it fit into the previous processed images we've seen, like these? http://www.planetary.org/blogs/emily-lakdawalla/2015/0601-a-very-few-more-details-on-pluto.html No clue whether that's a rift, a mountain chain, a flat dark area... whether the color caused by something dark deposited in a line on a light surface, by something light being eroded in a line off a dark surface, a dark surface that has been mostly covered by new light material on either side of the "line"..... either way, long linear features generally have interesting origins. ... that is, assuming that it actually is real. I don't doubt that it is, but there's always that possibility that it's a misprocessing artifact.

Hello ! At the moment it is just a dark feature and hopefully we see more within weeks. It is like the white spots on Ceres: Every othe photo reveals more details.(and raises more questions.) This is a very interesting time for us Astronomy Fans. And still i hardly can wait.... Regards Holger

I have it! None of this 'dwarf' stuff. Pluto is a giant tennis ball, while Charon is probably a squash ball.

Emily: Triton shows a striking change of composition across a hemisphere. Perhaps seen from afar in a highly processed image it would look like a line?

As we speed past Pluto in just over a months time... "If you do not expect the unexpected you will not find it, for it is not to be reached by search or trail." Heraclitus 554-483 BC But what would we do if we did see cities?

My best guess: it's most likely a great rift valley, cutting across the Plutonian southern polar ice cap; not unlike the Great Mariner Valley of Mars. If this is the case, well then we could name it "The Valley of New Horizons", for its Discoverer!

I just see two polar caps, one at the north pole and another in the anticarontian hemisphere. Looks like Iapetus.

I believe that when New Horizons gets closer we will see that the diagonal lines are part of the arc of a large crater from a massive body impact. Could this be the scar left from the impact that created Charon?

If I were the aliens I would immediately build something on Pluto, then send a comment on this blog when Emily cannot find words. Something along "it was a joke, calm down, everybody". So will New Horizons increase the frequency of photos as it gets closer or how does that work? I am a bit worried that the passby will send just a few blurry pictures from some weird angle and then it's all over. What exactly is the amount of data expected to be received? Also, I found out what the problem with the log-in was. People that use AdBlock or uBlock Origin are not able to log in, probably because of some weird similarity of the login script with some ad system.

Well what to expect? Considering the speed of New Horizon and the advance in technology, I expect something like the Voyager missions outcome. Considering the speed of the connection/distance we will get most of it weeks if not month after the flyby. And when the scientist are ready whith their work we will get even more insight, but this is not expected to be revealed before 6-60 month after the flyby. Not enough nails to chew from ;-) Regrads Holger

for all intents and purposes, this IS a Voyager mission. This is a leftover from Nixon's capricious decision to cancel Voyagers 3 and 4. We're going to get la bunch of totally cool pictures in the next few weeks, but most of the really good stuff won't arrive until the encounter is over. If you think about it, a Voyager 1 or 3 encounter with Pluto would have been even more gobsmacking than NH, because in 1989 we barely knew about Charon, and didn't have a clue about ANY of it when the Voyagers were in fact launched.

If there are Pluto channels, it is possible that liquid neon is there, at Pluto's temperature. Neon is fairly abundant in the Universe, and its presence on Kuiper objects should be looked into.

Percival Lowell did a *lot* of inference. He believed that the observed canals were strips of irrigated farmland surrounding the true canals. He also believed that the Martians had a world government because of the connectivity of those canals, and he even believed that Mars's capital city was in Solis Lacusl, because of the canals that converge there (Shklovskii, Sagan, Intelligent Life in the Universe). I would not be surprised if that was far too much for most of his colleagues to swallow.