New Horizons took these three photos of Pluto on May 8, 10, and 12, 2015, from distances of 80, 77, and 75 million kilometers, respectively. At those distances, the LORRI camera achieves about 6 pixels across Pluto's disk. These images have been enlarged by a factor of four and deconvolved. Deconvolution sharpens the original images to enhance features on Pluto but can occasionally add "false" details, so features seen here will need to be confirmed with later images taken from closer distances.

A lot of people are commenting that Pluto does not look round in these photos. You're right, it doesn't look round, but that's just an artifact of the way the camera works and the way the images have been enlarged and processed. The processing tends to turn anything that is especially bright into something that looks like a mountain, and anything that is especially dark into something that looks like a hole. In fact, since Pluto is quite large enough for the force of its self-gravity to overcome the strength of its icy material, there is no question that it will be very much round, more round than Ceres. (Pluto has the same density as Ceres, so has similar ice/rock composition, but Pluto has more than 14 times Ceres' mass, so its gravity is significantly stronger.) Roundness is one of the very few things that we can confidently predict about Pluto before New Horizons' flyby, because basic physics does a remarkably good job of predicting bulk physical properties of space objects. To give you a sense of what the photos looked like before manipulation, here's a raw image taken from the New Horizons website. 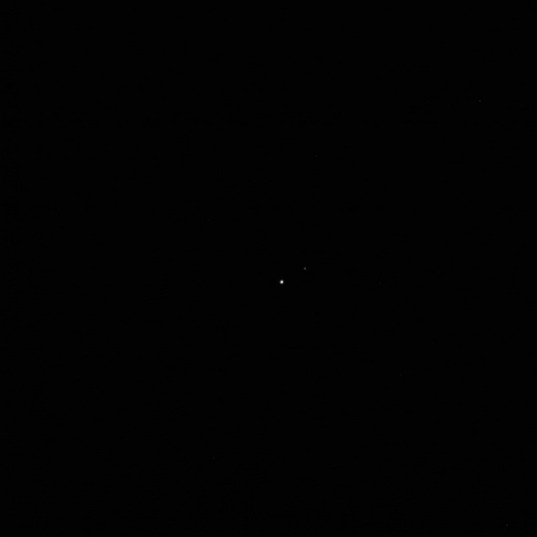 New Horizons took this photo at 7:31:00 UTC May 12, 2015 from a distance of 75.2 million kilometers. With a relatively short exposure of 100 milliseconds, background stars and moons smaller than Charon are not readily visible.

There is not much more that observers can say about New Horizons' latest pictures except that it is awesome to be receiving them. Björn Jónsson assembled this helpful comparison of what a variety of similar-sized solar system objects look like at very low resolution. There's not much you can say about any of these other worlds at such a scale, either, except that some of them have intriguing features. 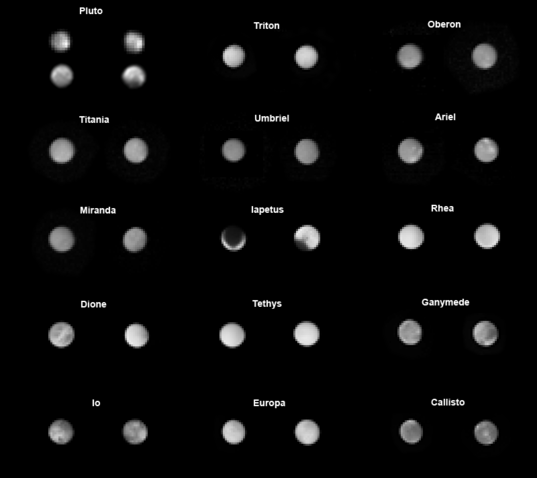 About this montage, Björn wrote:

I decided to assemble a quick montage comparing the best released New Horizons Pluto images so far to several outer planet satellites at low resolution. For the satellites I used Voyager images, except at Saturn, where I used Cassini images. I used two images of each body. In the best New Horizons images so far Pluto is roughly 8 pixels across following stacking and extensive processing (in the original images it is 4-6 pixels). I decided to make the satellites bigger, about 12 pixels across, mainly because soon we'll be seeing better New Horizons images than the ones released last month. In all of these images, where possible, the phase angle is comparable to the phase angle in the New Horizons images. I made no attempts to correct the image orientation (i.e. make north up).

Pluto is known to be a high-contrast body. It is obvious from this (with lots of caveats since I don't know the details of the Pluto image processing) that the contrast is rather big but not nearly as big as on Iapetus. The best satellite analogs in terms of contrast seem to be Dione, Ganymede, Io, and maybe Ariel. Triton exhibits far less contrast than Pluto. It's interesting to note that Ganymede has polar caps that are brighter than the equatorial regions.

After I saw this montage, I asked Björn if he could produce one showing the objects at their correct relative albedos. I knew that Umbriel was dark, and Tethys was bright, and Pluto was contrasty, but it's interesting to see just how varied these little globes' surfaces are. 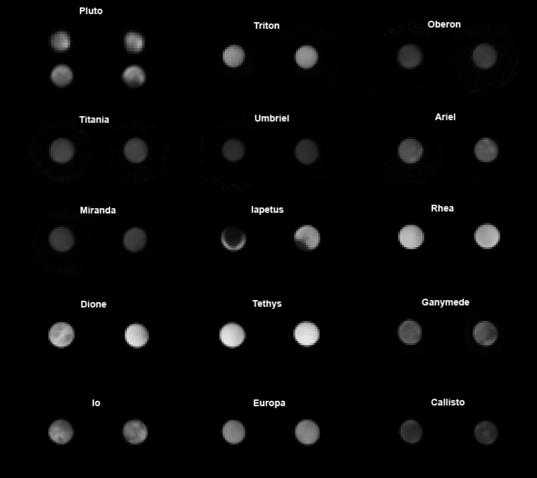 Still just a tease of what's to come! Fewer than six weeks remain until all this guessing is over and we can see Pluto's face for real.

I agree that Pluto will be round, but it may not be perfectly spherical. There will likely be a bulge like many other moons and planets have. (I, personally, think the bulge will be frozen from when Pluto was rotating much faster, but, as is the common refrain, we'll have to wait and see).

Isn't Pluto smaller than mars, so at similar distances one should expect different resolutions? New horizons is such a tease

Thanks for keeping embellishments from this site. Best reporting on the net. Kind regards

Great pictures. But feeling Triton, Ariel analogs do Pluto the best justice (light conditions, distance from sun, temperature). Would have to disagree with the Io analog, due to it's proximity to Jupiter conditions. Not sure if camera conditions (aperture, speed, white balance, etc) of instrument were all equivalent. Still, this is a great modeling technique!

@Waiting for Pluto Pictures: "Why is the pluto photos have such a low resolution?" Two reasons: 1) Pluto is 1/3 the size of Mars (so you'd have to be 3x closer for similar resolution relative to the diameter) and 2) sunlight is nearly 500x dimmer at Pluto (lower signal-to-noise ratio)

I take it that we're now in the "better than Hubble" phase of the mission. Good.

The last day or two we've had stories about Pluto's small satellites being nearly resonant and tumbling chaotically. Just wondering...has anyone considered whether there might be something very small orbiting Charon?